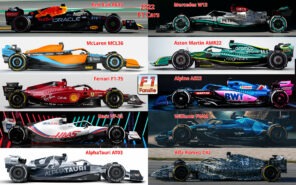 Here you can see the 2022 F1 teams and driver line-up with the most important info about your favourite 2022 Formula 1 team.

The first driver who was confirmed as 2022 driver for McLaren was Lando Norris.

Other drivers who are still working on a new contract for the 2022 season are Antonio Giovinazzi and Mick Schumacher.

On the 27th of August the Red Bull Racing team confirmed that Sergio Perez will drive a second season for them next to Max Verstappen. Now there were still 9 seats to be confirmed at the F1 teams 2022.

On the first of September Alfa Romeo reported that Kimi Raikkonen will retire from F1 at the end of the 2021 season. On the 6th of September the same team confirmed their deal with Valtteri Bottas for 2022 and beyond, making the path clear for George Russell to claim his Mercedes seat.

Mercedes at last confirmed George Russell for next season on the 7th of September. On the same day a few hours earlier AlphaTauri also confirmed Pierre Gasly and Yuki Tsunoda.

The drivers transfer news kept going and on the 8th of September Nicholas Latifi and Alex Albon got confirmed by the Williams Racing team.

On Thursday morning 16th of September Aston Martin confirmed they will keep Sebastian Vettel and Lance Stroll as their driver for next season.

On Tuesday morning 16th of November Alfa Romeo confirmed they signed up Guanyu Zhou as their second race driver alongside Valtteri Bottas. Zhou will become the first ever Chinese F1 driver on the grid this season.

In March Russia attacked Ukraine and because of this the Haas team terminated Nikita Mazepin's contract and replaced him with their previous driver Kevin Magnussen.

Nov.18 - Gunther Steiner says he doesn't blame Mick Schumacher for Haas' struggles in 2022. It was finally confirmed on Thursday that the 23-year-old son of F1 legend Michael..

Nov.10 - Williams has emerged as a potential lifeline for the endangered Formula 1 career of Mick Schumacher. It is now widely believed that, after two seasons together, Haas will..

Nov.3 - Gunther Steiner would be a "fool" to show Mick Schumacher the exit door at Haas, according to German motor racing legend Hans-Joachim Stuck. With the small American team..

Nov.2 - Gunther Steiner has all but confirmed rumours that Haas intends to finalise its 2023 driver lineup ahead of next weekend's Brazilian GP. Mick Schumacher's main rival for..