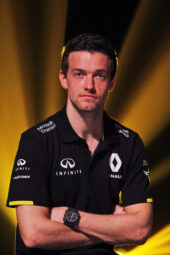 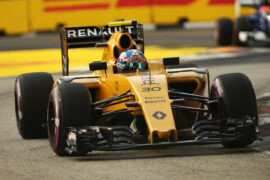 Leading Renault’s charge this season is new-boy Jolyon Palmer, who follows in his father’s footsteps by making his dream come true in F1.

Palmer, the son of 90s racer Jonathan Palmer, has not been carried into the sport by his dad’s cash or influence, though. He is a former GP2 champion and a highly-rated driver, who is unlikely to look out of place in the bigger series in the world.

After a season in Formula Audi and a second placed finish in Formula Two in 2009, Palmer made the switch to GP2 – the conventional feeder series for F1.

However, it took him 18 months to win his first race and he didn’t finish in the top 10 until his third season in 2013.

But Palmer is a renowned student of racing, and took GP2 by storm in his fourth season as he won four races on his way to the 2014 title.

Talk of F1 gathered momentum and on the back of his success he joined Force India as a Test driver for the remaining races that season, and then Lotus for 2015.

With the British team suffering financially, Romain Grosjean jumped ship to Haas F1 and a spot opened for the Sussex-born Palmer to take his seat.

In 2015, he showed enough promise in 12 Friday practice sessions to be just 0.2s off the pace of veteran driver Pastor Maldonado.

Renault have now bought Lotus, and while his cash is a key reason behind his appointment, Palmer didn't deliver what he was expected to deliver. He had a lot of technical trouble in 2017 and he couldn't put his team mate Nico Hulkenberg under pressure. He was out qualified in 15 of a total of 16 races. He classified a very good 6th in his penultimate race during the Singapore Grand Prix. But this great result was to late, because his future in F1 was already planned by other forces.

He drove his last race at the Japanese Grand Prix  where he finished 12th. His seat was given to Carlos Sainz for the last 4 races of the 2017 F1 season.

The motor racing world was shocked in September when the FIA F3 car of Australia's Alex Peroni was launched skywards by a "sausage" kerb on the outside of Monza's famous..

Great British GP: how Leclerc has evolved and more!

Bottas' battle with Hamilton, Vettel's collision with Verstappen and Leclerc 2.0 taking on Max... Jolyon Palmer has all the angles to evaluate a spectacular Silverstone

Sep.29 - Carlos Sainz says he is staying in his Toro Rosso seat for the rest of 2018. In the weeks before Malaysia, there were rumours the Spaniard would make his move to Renault..

Sep.29 - Jolyon Palmer has admitted he is eyeing a potential switch to Indycar for 2018. After a tough couple of seasons with Renault, the son of former F1 driver Jonathan Palmer..

Sep.29 - Lance Stroll says he is getting on with his job rather than worrying about who his teammate will be in 2018. With Felipe Massa's future unclear, Williams has one of the..

Sep.26 - Robert Kubica has not denied speculation he is now in the running for the Williams race seat for 2018. Earlier, the former BMW and Renault driver was eyeing a return to..

Sep.25 - Jolyon Palmer looks set to keep his race seat at Renault for the rest of the 2018 season. Sources report that the British driver and his father Jonathan turned down the..

Sep.18 - Jolyon Palmer's father has confirmed the 26-year-old is eyeing a switch to Williams for 2018. Renault driver Palmer admitted Singapore was a difficult weekend, as he..

Sep.17 - Jolyon Palmer says he learned about losing his seat at Renault from the internet. "I knew it when I read it on the internet," Speed Week quotes the Briton as saying. "So..

Renault Sport Formula One Team is pleased to announce that Carlos Sainz will join the team as Race Driver for the 2018 season. Twenty-three year-old Carlos has raced in 53 Formula..