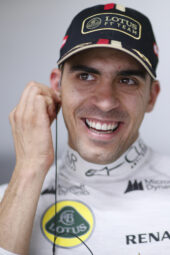 It is fair to say that fans did not warm to Venezuelan Pastor Maldonado, but underneath the controversies is a driver full of talent.

Maldonado broke into the sport in 2011 as Rubens Barrichello’s team-mate at Williams, in a move which raised eyebrows as Maldonado received heavy financial backing from the Venezuelan government.

A poor start to the season only heaped the pressure on him, and when he collided with Lewis Hamilton in Monaco his driving quality was called into question.

However, Maldonado is the 2009 GP2 champion and an impressive qualifying record proved he had the talent to be on the grid. But poor race results in comparison to his savvy team-mate Barrichello failed to ease the pressure.

Maldonado's and Hamilton’s spat continued in Belgium, when the William’s man deliberately drove into the Brit after qualifying, and earned himself a five-place grid penalty.

Incidentally this is where he picked up his first point after a good performance earned him a 10th placed finish. It would be his only point of the season.

Williams decided to retain Maldonado for the 2012 season and released Barrichello, in a decision which, again, was puzzling.

However, Maldonado showed how good he can in a much quicker car. Despite the car’s obvious improvement, no-one could have predicted his stunning qualifying lap in Spain which helped him to second on the grid.

After falling behind Fernando Alonso at the start, the Williams man drove the race of his life to beat the Spaniard and win his first Grands Prix. It was a dominant display that showcased his true speed and potential to the world.

Unfortunately that was as good as it got for the 2012 season as struggled next to new team-mate Bruno Senna. Further points in Japan and Abu Dhabi saw him finish the season in 15th place with 45 points.

2013 was a disastrous season for Williams and a very public fall out meant Maldonado’s exit was inevitable He hoped that a move to Lotus could bring a title challenge, but the team badly built their 2014 and they struggled to score points.

2015 saw Lotus produce a better car, but Maldonado's inconsistency frustrated the team all season. He finished well behind Grosjean in the end-of-season standings, and he was released at the end of the campaign

Former F1 driver Pastor Maldonado is expecting trouble at Ferrari in 2020. The Italian team and Sebastian Vettel have announced their split - but that will only take effect from..

Pastor Maldonado 2019 Beyond the Grid interview

Pastor Maldonado was always a headline maker. The Venezuelan arrived in F1 in 2011 with Williams as GP2 champion, and the very next year delivered the team a first win in over..

﻿ At the start of the Abu Dhabi Grand Prix made fernando Alonso contact with a sauber, causing that he couldn't make the turn and crashed into Pastor Maldonado. And took him out..

May 7 - Former F1 driver Pastor Maldonado has played down any comparison between himself and Max Verstappen. Now 33, the former Williams and Lotus driver last raced in 2015,..

Teenager Stroll hits back at criticism

Mar.8 - Lance Stroll insists he is "ready" for formula one. However, the pressure is already piling on the 18-year-old rookie's young shoulders, following three mistakes including..

Dec.13 - Pastor Maldonado says he is working on his return to formula one. With a controversial driving style, the 31-year-old raced for Williams and Lotus until 2015, when his..

Nov.10 - Jacques Villeneuve insists it is not fair to compare Lance Stroll with other F1 'pay drivers' like Pastor Maldonado. Reportedly after his father and Canadian billionaire..

Aug.12 - Pastor Maldonado could be set to get his race career back on track in sports cars. Since losing his Lotus/Renault race seat at the end of last year, the controversial..

Jun.2 - Pastor Maldonado has confirmed rumours he is "looking for a way" back into formula one. The Venezuelan, whose F1 foray with Williams and Lotus was heavily backed by the..