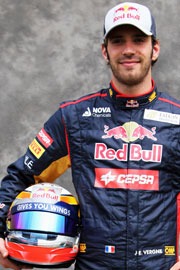 The career of talented former Toro Rosso driver Jean-Eric Vergne is in limbo after he missed out on a promotion to Red Bull, to his former team-mate Daniel Ricciardo.

The pair were in a straight fight to replace the retiring Mark Webber at the end of 2013 and Vergne ultimately missed out. At Toro Rosso, he has now been dropped in favour of a new generation of young starts. Vergne’s narrow defeat to Ricciardo may have ended his F1 career.

If he doesn’t secure a top drive elsewhere it would be a big shame as all that early potential would go to waste. Vergne has an excellent junior record, with championship successes in French Renault Campus, Formula Renault and British Formula Three as we effortlessly dominated the junior formulas.

Red Bull saw this ability very early and threw him in at the deep end for the 2012 season with Toro Rosso. Just four points finishes out of 20 races, all 8th placed, was a poor start but it isn’t easy for young drivers to get consistently good results in a struggling car.

That is why the appeal of his system Red Bull implement is attractive. The internship separates the men from the boys, just ask Sebastian Vettel.

In 2013, Vergne didn’t quite push on as he should have done and finished the season with 13 points, 7 less than Ricciardo, with the highlight being a 6th place finish in Canada which accounted for nearly half his points.

In 2014, he handsomely beat his younger team-mate, Daniil Kvyat, as he put a decent season together. However, that didn’t stop Toro Rosso replacing him with 17-year-old Max Verstappen, and without sponsorship money and big teams available, Vergne’s short, but promising F1 career, may be over.

Jean-Eric Vergne does not sound keen on a potential return to Formula 1. His former boss, Red Bull's Dr Helmut Marko, this week all but ruled out a return for the two-time Formula..

Dr Helmut Marko has all but ruled out a return to Formula 1 for Jean-Eric Vergne. Vergne, now 29, raced for Toro Rosso between 2012 and 2014, but since being ousted by Red Bull he..

Two-time Formula E champion Jean-Eric Vergne has admitted his time in Formula 1 was "really difficult". Now 29, the Frenchman is one of many drivers who rose through the notorious..

Alejandro Agag, the boss of Formula E, is not ruling out a "long term" merger with formula one. Once dismissed as slow and quiet and obviously eclipsed by F1, Formula E has been..

Formula E continues to shape up as a major single seater series of the future. The latest driver to take the all-electric category seriously is Sergey Sirotkin, who will test in..

The no7 Toyota will line up alongside the sister car on Saturday’s grid after Kamui Kobayashi posted a 3m17.377 in FP1 to book their front row position. Row two will be headed..

May 8 - Jean-Eric Vergne agrees with those who think 2019 could finally be Ferrari's year. Recently, the former F1 driver continued his career as a Ferrari tester, but he is now..

Feb.22 - Jean-Eric Vergne has confirmed that he will no longer work with Ferrari in 2017. Earlier, the former Toro Rosso driver was Ferrari's reserve driver, but that role has..

F1 fuApr.23 - Jean-Eric Vergne thinks the additional testing allocated for Pirelli's 2017 tyre development will give him a chance to return to F1 action. After threatening to quit..