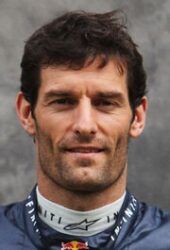 The term ‘grit and determination’ is a fine way of describing former racer Mark Webber. The Australian battled hard throughout his career to get to the top of the sport and fighting for world championships. He drove for teams at the front, middle and back of the grid in a complete career.

Eventually the lack of success he was getting at Red Bull saw Webber retire at the end of 2013. He was one of the most popular drivers on the grid and will be badly missed. His career shows that even if you’re not hand-picked for the top, you can still make it.

Webber initially signed for minnows Minardi in 2002, the slowest car on the grid. Despite this he scored points in his very first race, his home grand prix in Australia. Webber benefited from other drivers problems and finished 5th in a remarkable performance. The rest of his debut season was spent struggling towards the back, but Webber equipped himself well enough to earn a move to Jaguar in 2003.

The Australian showed the world how good he was by qualifying third in the season’s third race in Brazil and went on to score points in five out of six races in Europe. The Australian went on to have an impressive year and won Autosport’s ‘Driver of the Year’ award, beating Michael Schumacher, Kimi Raikkonen and Juan Pablo Montoya. This award was justified by the remarkable statistic that showed that Webber has yet to be out qualified by his team mate at any grand prix in his two years.

Jaguar failed to progress in 2004 and reliability proved to be the team’s biggest problem as Webber retired eight times. A disappointing seven points were collected that season, and Webber decoded enough was enough. In 2005 he joined Williams. The faster car helped Webber score more consistent points, and his first podium materialised with a third placed finish in Monaco. His best haul of 36 points and a tenth placed finish in the drivers’ standings capped an impressive year.

An unwelcomed pattern was emerging for Webber as after every good season came a bad one. 2006 saw arguably the worst Williams car in a decade as Webber and rookie team mate Nico Rosberg scored just 11 points between them. Mid-way through the season a deal was struck for Webber to join Red Bull, a new team languishing in mid-table. The potential to work alongside design genius Adrian Newey was the driving force behind Webber’s decision.

Initially it hadn't looked like Webber had progressed much further up the grid, as he had an up and down season.  A second career podium in the wet European Grands Prix at the Nurburgring was cancelled out by his crash in Japan where he was fighting for a maiden win. While running second in the torrential conditions behind Lewis Hamilton’s struggling McLaren the safety car came out. Hamilton braked severely while following the car and Sebastian Vettel, running third, didn't anticipate the change of speed and collided with Webber’s rear taking them both out of the race.

2008 was another mediocre season with Webber finishing with 21 points, but with the dramatic rule changes arriving in 2009, Red Bull fancied their chances at producing a title winning car. Webber was joined by Vettel, and immediately the car was a hit as Vettel won the Chinese Grand Prix in the season’s third race. Webber followed his team mate home in second and secured his best ever finish.

Consistently, Webber scored high points behind the dominant Jenson Button in the Brawn car. Red Bull improved their car as the season progressed and in Germany Webber set his first pole position. An eventful race, which saw him recover from a drive through penalty, saw the 32 year-old record his first Formula One win. A string of podiums saw him sit second in the championship, but then a poor patch saw him eventually finish 4th. A second race win in Brazil followed at the end of the season. More of the same was to follow.

Red Bull entered 2010 as favourites for the title; however Sebastian Vettel was hotly tipped to lead their charge over Webber. The Aussie’s renowned grit and determination saw him out race Vettel for much of the season as he showed his true class. Five pole positions and four race wins in Spain, Monaco, Britain and Hungary, with the first two being a memorable back to back triumph, saw Webber lead the championship at the half way stage. However the wins dried up and he subsequently fell away to finish third, just 14 points behind champion Vettel.

Critics believe this was his finest year as Vettel strolled to the championship in 2011 as Webber failed to get anywhere near him. Just one win, in Brazil, in comparison to Vettel’s 11 told the whole story. In 2012 again the Australian looked to be in with a shout after a positive first half of the season, which saw wins in Monaco and Britain. But a familiar story of poor form and bad luck saw any realistic challenge disappear.

As time went on it became clear that Vettel had a unique understanding of the rules and that Webber couldn't quite adjust. His preference for the older rules which were in place when he first entered the sport was well-known. In 2013 he looked disillusioned. Vettel and Red Bull were the class of the field again. The margins between the team-mates were small but the German always had the upper-hand. Webber failed to win a race. Vettel won 13 and a fourth straight championship.

The decision to retire wasn't surprising. Webber clearly struggled in the last 18 months and the incident in Malaysia in 2013, when he was overtaken by Vettel in a battle for the win, when the team said he wouldn't, clearly had an effect. He bowed out with nine wins and 13 poles. Not bad for a guy who started at Minardi.

With help from Mark Webber, Jamie Whincup and Casey Stoner, its time to find out who will win in the battle between motorbike, supercar and Formula 1

Dec.21 - Max Verstappen is not yet as good as seven time world champion Lewis Hamilton. That is the view of Mark Webber, a former Red Bull driver who admitted to admiring Dutch..

On assignment for Channel 4 F1, David Coulthard and Mark Webber had some fun in the Red Bull Racing factory while the Team were away in Sochi for the Russian Grand Prix. Clearly..

Jul.8 - Mark Webber thinks it could be "better" if his former teammate Sebastian Vettel quits Ferrari before the end of the current season. The Ferrari-Vettel relationship took a..

Jun.23 - Mark Webber thinks Ferrari has made a good choice by signing up Carlos Sainz for 2021. The signing means the Maranello team is ousting Sebastian Vettel, who won all four..

Webber: 2020 title to be Hamilton VS Verstappen

Jun.22 - F1's 2020 world championship will be a two-man fight, according to former driver Mark Webber. "In reality, it will be between (Max) Verstappen and Lewis (Hamilton)," the..

Jun.15 - Opinions are split over whether Fernando Alonso should return to Formula 1 with Renault next year. The Spaniard's friend and former rival Mark Webber thinks Alonso is..

Ecclestone: No pressure for Vettel in 2020

Sebastian Vettel will put his throttle to the floor when he contests his last races with Ferrari later in 2020. That is the prediction of the quadruple world champion's friend and..

Valtteri Bottas may be lacking the "hunger" to beat Lewis Hamilton at Mercedes. That is the view of Mark Webber, who told Britain's Channel 4 that 2019 was "a tough season" for..

Mark Webber does not think the Ferrari or Red Bull-Honda drivers can beat Mercedes' Lewis Hamilton to the 2020 title. Most pundits, including the former 9-time grand prix winner..