An elder statesman who has captured the heart of the sport, Jenson Button still has a point to prove as he hopes to lead McLaren into a new era of success.

The 2009 world champion looked like he was being edged out of the sport, but a last minute reprieve means he will partner Fernando Alonso this season, as he hopes to have a glorious winter at the end of a topsy-turvy career.

When he first entered the sport back in 2000, much was expected of the then 20-year-old. He had just become the youngest ever driver in the sports history.

However contract disputes, off the track distractions and a series of mediocre cars didn’t allow the Somerset born Englishman to show his undoubted talent.

What many describe as his breakthrough year came in 2004, while at BAR.

Although that season is largely forgettable, as Michael Schumacher and Ferrari flattened everything in their path, Button provided a fresh sense of optimism by scoring nine podium finishes and coming third in the championship.

Despite being contracted for a return to the experienced team Williams, who he drove for in 2000, Button controversially remained with the Honda powered BAR.

This, rather than anything that happened on the track, dominated British newspaper headlines, which highlights both the magnitude of what was happening, and the poor standard of competition on the track in 2004.

The BAR team wasn't able to keep up with the development speed of the top teams. Unfortunately for Button, the team failed to progress and they slumped back into midfield obscurity under their new guise of Honda.

Jenson did show flashes of his quality and took a brilliant maiden victory in the wet conditions of Hungary in 2006 which underlined his star potential.

Button may not have the single lap speed of Lewis Hamilton or Kimi Raikkonen but he has one of the best brains in the business, and is comparable to the great Alain Prost.

Following a dismal 2008 season and the global financial crisis, Honda decided to pull out of F1 and after a couple of mediocre years, there was a real possibility that his Formula 1 career was over.

However, technical director Ross Brawn bought the team, renamed it Brawn GP and inherited the 2009 cars, which were already built. He bought it hoping that this his gamble would pay off. It did, spectacularly.

The car happened to be much quicker than anything else and Button dominated the opening races, taking six victories out of seven. The Englishman relished the opportunity to drive a championship contending car, and his winning became relentless.

However, Brawn’s lack of financial muscle meant that they couldn’t develop the car as fast as their rivals. Red Bull and McLaren started to win races, and Button’s championship hopes were beginning to look doubtful.

But a late surge of podiums in the final few races saw him win the title in Brazil, in the penultimate race of the season.

Brawn was bought out by Mercedes for the following season, and Button left to partner Lewis Hamilton at McLaren. Despite being a world champion, Button was not expected to compete with his more illustrious team-mate, but two wins from the opening four races showed he meant business.

Jenson Button in action during the Chinese F1 GP

In a five-way title fight, Button faded towards the end of the season as Sebastian Vettel claimed his maiden crown.

In 2011, Button had, arguably, his best ever season in F1. Winning the title may have been out of the question, as Vettel’s Red Bull dominated, but Button won four races, comfortably beat Hamilton over the course of the season, and held off Fernando Alonso to come second in the standings.

Button made a flying start to 2012, with another win in Australia, before poor reliability and poor team decisions hampered his usually excellent consistency. Further wins in Belgium and Brazil helped him to finish fifth in the standings, but just two points behind Hamilton.

Hamilton made the seemingly bold move to move to Mercedes, leaving Button with new team-mate Sergio Pérez. But Hamilton got the better end of the deal as Mercedes competed for wins and McLaren went backwards. 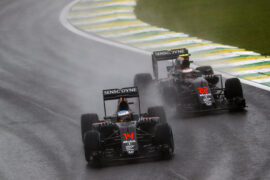 Button failed to score a podium and struggled to ninth in the standings, while things didn’t improve in 2014 as he limped to eighth.

With McLaren desperate to return to the top, it looked likely that Button would be allowed to leave the team as they lined up Fernando Alonso. Alonso did sign, but Button was retained at the last minute.

McLaren's new partnership with Honda turned out into a night mare. The team dropped from 5th to 9th place in the constructors championship. But the McLaren management kept the Honda power unit in 2016 and even said it was a realistic aim of fighting for victories. 2016 wasn't as bad as 2015, but Button wasn't clearly able to score any podiums.

In his last F1 season his best finish was 6th in Austria. He had to retire 6 times. He even had to retire his last Grand Prix in Abu Dhabi. The 15th place in the drivers championship table was the result of his last season.

Button's Formula 1 career was a good story. The distinguished Englishman had a career with it's ups and downs like other long term driver has. But not much drivers scored a drivers title. He attended 16 F1 seasons and drove at 7! different teams and remains one of the most popular drivers in modern F1.

Jenson Button driving the Benetton B201 Renault at Germany (2001)

In this classic clip we have three Honda's going head-to-head-to-head to see which is best. Steve Curtis will be racing in his 225HP Power Boat, Michael Rutter on his Super Bike..

Opinions are split as to whether Fernando Alonso will return to Formula 1 next year. His manager Flavio Briatore says the Spaniard is "ready" to return after a two-year..

As coronavirus and the associated and disproportionate hysteria grabs Formula 1 (and the world) by the you-know-whats, it's worth having a little think about who might be missing..

Naoki Yamamoto "should be in Formula 1". That is the view of 2009 world champion Jenson Button, referring to the Japanese driver who got his first taste of a F1 car at Suzuka last..

Jenson Button 2019 Beyond the Grid interview

This weeks guest is someone who lived through one of the sport’s biggest fairy tales when, in 2009, he won the world title with Brawn GP, less than 12 months after the team had..