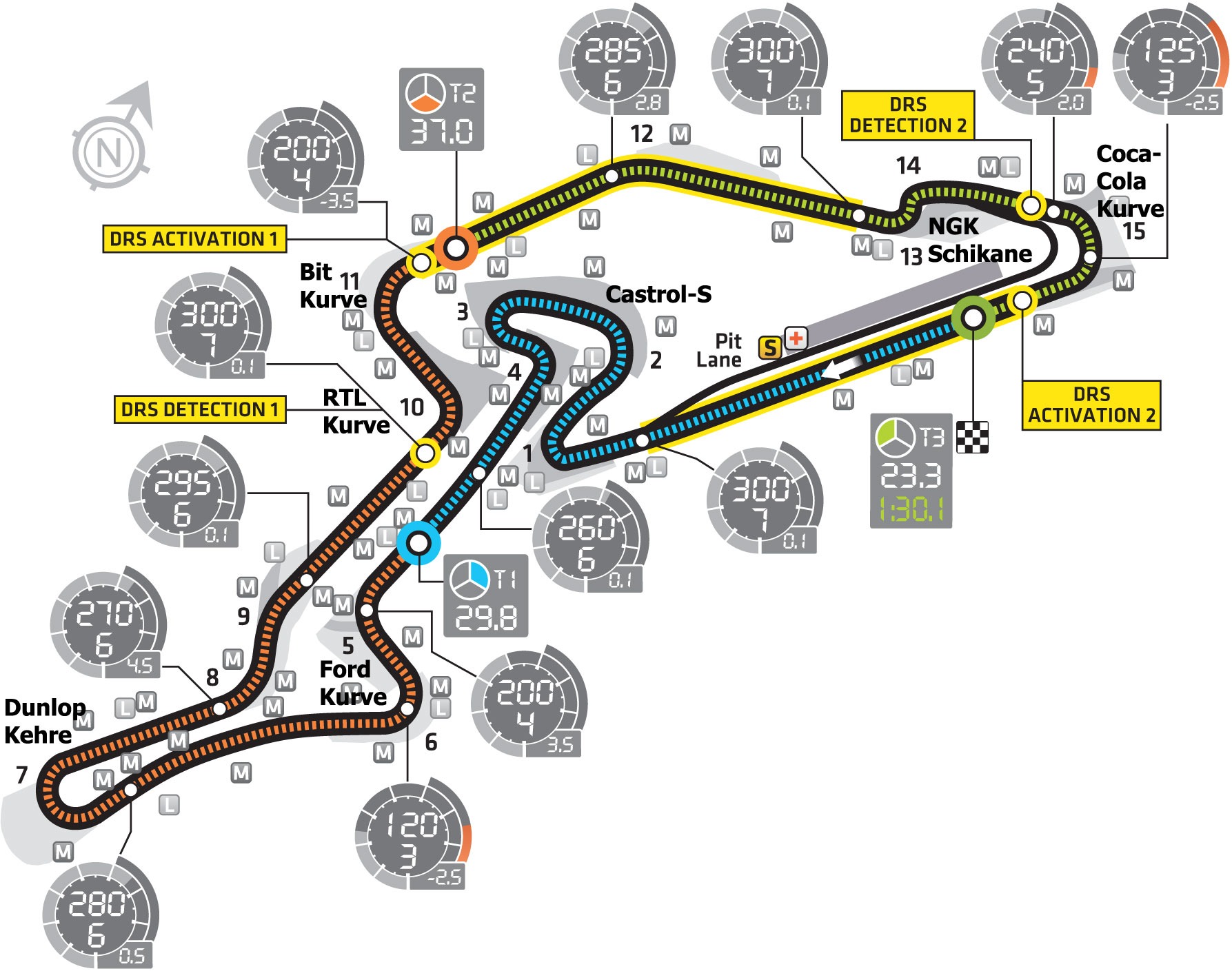 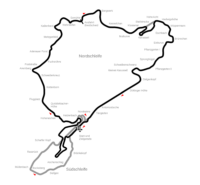 In the old days the Nürburgring had the Sud and Nordschleife. In the 1920's (1925-27) the Germans build this notorious and merciless 28.265 kilometre long track in the Eiffel mountains around the village of Adenau and next to Nürburg.The unforgiving track with it's tricky corners, treacherous crests, steep inclines and gradients and constantly changing road surfaces demand great skill from the driver and put vehicles to a hard test.

The circuit was build in the Eiffel a labour project to rise the wealth of the poor area. The total costs of the construction of the whole track was about 15 million Reichsmark and employed up to 3,000 workers for two years.

The Nordschleife. the 20.8 km long track was used as Formula 1 circuit for 22 seasons. It wasn't until 1961 that drivers could drive a lap under 9 minutes. Phil Hill was the first to beat the 9 minutes mark in 1961. He set the lap record to 8:57.800 min in the Ferrari 156. It took him 10 laps in a race that only took 15 laps in total. It was f1 legend Jackie Stewart who nicknamed the old track to "The Green Hell". A name that will never be forgotten.

The last race on the Nordschleife was held in 1976. This was also the year the Niki Lauda had his narrow escape when his Ferrari snap oversteered and crashed in the corner with no name before the "Bergwerk' corner.

In 1985 the race was held on a new build Nurburgring, which was build especially for Formula 1.

Castrol-S
After the long run from the start finish line to the first corner, the Castrol-S, drivers brake hard and shift into second gear for the hairpin. The hairpin sees the revs drop very low here: just 9,500rpm, the lowest revs seen on this circuit, before going straight into the Mercedes-Arena; a second to third gear complex taken with an average speed of around 100km/h. Through this section the engine needs to have good braking control on the entry to corners and good traction on the exit.

Turns 8 & 9
After the hairpin of turn 7, taken in second gear at just 10,500rpm, the driver accelerates hard to turn 8. With only a short straight before the corner he does not have time to reach maximum speed, but will be ‘flat out’, with the accelerator pedal at full travel, by the time he takes the corner in sixth at 250km/h. The loads travelling through the car will still be huge even with the relatively low speed; the driver will pull around 3.5g through this section. As a result the internals and fluids within the engine will also need to withstand this increased g-force.

Sector three is the shortest section in time on the track, taking just 24secs to complete. In fact only the chicane and the fast right hander back onto the pit straight break up the constant period of acceleration. The chicane is the slowest corner in sector three, and one of the hardest stops anywhere on the track. F1 Drivers approach at over 300km/h with DRS open, braking to second gear and just 90km/h for turn in. The driver will just blip the throttle between the kerbs and then accelerate back through the gears to the final corner. In the data this big stop is seen very clearly, with an abrupt descent from close to 18,000rpm to a little over 10,000rpm.

Toto's Trip Down Memory Lane at the Nordschleife

1954 August 1st - Juan Manuel Fangio wins the German Grand Prix on the Nordschleife-Nurburgring for the first time in his career and for Mercedes. Here you can find the 1954..

This legendary race was held on August 4, 1957. With Vanwall having proved themselves to be competitive with victory at British F1 GP, there was much excitement as the Grand Prix..

"Our latest F1 2019 feature on the Formula 1 German Grand Prix. Germany is one of the heartlands of Grand Prix racing, the nation hosting events pre-war, with the history of the..

In this great full colour fiilm, you can see the highlights of the 1967 German Grand Prix held on the notorious Nurburgring Nordschleife. These were the days that Formula 1 cars..

In this a full color video of the 1973 German Formula 1 Grand Prix that took place at the legendary Nordschleife with great sound. The race was won by Jackie Stewart and only took..