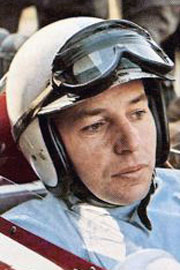 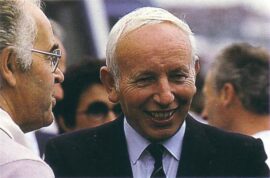 John Surtees is the only Formula 1 champion that also scored a championship in Motor racing on two wheels.

From dominating in the Grand Prix motorcycle racing to being introduced to cars after almost beating a young Jim Clark in a Formula 3 event, John Surtees motorsport career is one to remember for its unique achievements. Born on the 11th of February of 1934 in Surrey, England, he grew up around bikes and soon enough learn to work with them with perfect synergy, riding and fixing them.

Four 500cc World Championships and three in the 350cc division looked well enough to imagine Surtees heading off to retirement. However, his tough mindset and unique competitiveness saw him add a couple of wheels to the machines he was going fast with. 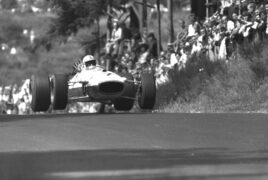 The “Figlio del Vento” was his nickname in Italy, where he cemented his motorcycling legacy riding for MV Agusta. A natural racer, he entered a race at Goodwood and finished second in a Cooper behind the legendary Jim Clark, who was a young driver at the time. Colin Chapman signed him to drive for Lotus in the 1960 F1 season and his four-wheel journey began.

Surtees made his Formula 1 debut in the 1960 Monaco Grand Prix and had to retire due to a transmission failure on his Lotus 18. Just seven days before his F1 debut, he was winning the first races of the 350cc and 500cc classes in the motorcycle World Championship at France.

He missed the next four races as he was still busy winning motorcycle Grands Prix and on the way to winning the 350cc and 500cc championships, which would be his last two. Then, he returned to Formula 1 racing with a great second place at Silverstone in the 1960 British Grand Prix after starting 11th. 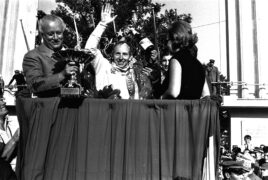 At his third F1 race, the 1960 Portuguese Grand Prix, Surtees qualified on Pole Position but was forced to retire from the race with radiator trouble. In the last race of the year and Surtees’ fourth in F1, he qualified sixth but retire after just three laps. For 1961, he was a solid name amongst F1 teams and he chose to leave Lotus and drive a Cooper T53 for the Yeoman Credit Racing Team. However, that year he only finished in the points twice with two fifth places in Belgium and Germany.

For 1962, he drove a Lola Mk4 with a V8 engine for the Bowmaker-Yeoman team. Although results improved (two podiums, a Pole Position and five of the nine races finished in the points), he wouldn't drive for them the following campaign. In the race where he achieved his first podium of that season and his second overall, the 1962 British Grand Prix, he started second and finished second behind the Lotus of Clark. The result was special for Surtees, as he was dealing with gearbox issues from the early stages of the race. 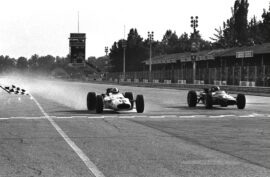 Surtees decided to leave Yeoman and took the chance to return to the country which saw him conquer the motorcycling world with dominating fashion. As he joined Ferrari, the “Son of the Wind” was looking to replicate the success he had already enjoyed with an Italian outfit in bikes.

The highlight of his first year with Ferrari came in Nürburgring, where he won the 1963 German Grand Prix with a commanding gap over Clark. Surtees ended 1963 in fourth place in the World Drivers’ Championship with 22 points, his biggest tally at that point.

In 1964, he finished on the podium sixth times and won at Germany again with an outstanding drive. For the WDC, only the six best results counted and Surtees met the criteria perfectly, achieving six podiums. He won at Monza from Pole and lapped every driver outside the top 2. In the penultimate race of the year, he finished second at Watkins Glen as Graham Hill won.

His second place at the USA pushed Surtees up to second in the WDC, behind Hill. In the title-decider in Mexico, Surtees looked like a doubtful challenger at the beginning of the race, but a crash between Hill and Surtees’ teammate Lorenzo Bandini put him in contention. Clark was leading the race and on pace to win the championship, but an oil leak ended his hopes. Bandini let Surtees pass on the last lap, thus giving him second place and the historical championship. 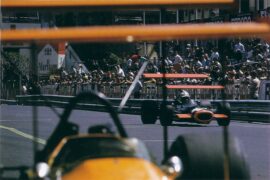 John Surtees driving the BRM during the 1969 Monaco F1 GP

After becoming the first (and so far only) person to win world championships in motorcycles and cars, Surtees and Ferrari had a down year in 1965. He only achieved three podiums and a fourth-place at Monaco, which gave him fifth in the WDC with just 17 points. Late in 1965, Surtees had a near-fatal accident at Mosport, Canada, when driving his Lola car for the Can-Am Series. He missed the last two rounds of the F1 calendar at the USA and Mexico due to his injuries.

Surtees recovered and returned for the 1966 season with a good level, winning the second race of the year, the 1966 Belgian Grand Prix in his Ferrari 312/66. However, his success with Ferrari at Spa-Francorchamps was his last outing with the team. Surtees, a tough person with a nack for discussion during his racing days, had issues with team manager Eugenio Dragoni. Dragoni elected to leave Surtees out of Ferrari’s lineup for the 1966 24 Hours of Le Mans and Surtees decided it was the last problem they would ever have.

Surtees completed the 1966 F1 season driving for Cooper, where he achieved a victory in Mexico and other two podiums to finish second in the championship behind a dominant Jack Brabham. He moved to Honda for 1967 and earned a podium in his first race for them. That year, he also won the 1967 Italian Grand Prix, which would be his last victory in Formula 1. 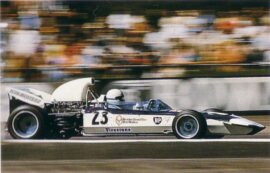 Between 1968 and 1969, he managed to score just three podiums with Honda. Then, he decided to enter his own team, but the success was not there. He could only score six points combined in 1970 and 1971 and retired in 1972 after starting only in the 1972 Italian Grand Prix.

He dedicated his life to his team until 1978, when he left Formula 1 altogether. He had three kids. Henry Surtees, his son, competed in single-seaters but sadly died in a Formula Two accident in 2009, which made John found The Henry Surtees Foundation to help improve the safety of the racing world.

Surtees, the great champion in the biggest categories of bikes and cars, died on the 10th of March of 2017 at the age of 83.

“It is basically a love affair, isn’t it? You come together with machinery. Sometimes is, of course, a little bit of a hate affair when they don’t work. But other times, things become special in your life.”

CONTENT: Documentary looking at the history of Formula 1 pit stops to coincide with the third anniversary of its sub-two second stop at the 2013 US Grand Prix. The Milton..

A season finale at Mexico City with John Surtees who takes the 1964 F1 World Championiship ?. This was also the last time that Ferrari cars raced in any colour other than Rosso..

F1 circuits have never been more demanding than the original Spa road course in Belgium's Ardennes forest. Ultra-fast and ultra-treacherous, particularly in the semi-wet, the old..

Mobil 1 The Grid remembers John Surtees – the only man in motorsport to have won world titles on both 2 & 4 wheels. The British legend won the 500cc Motorcycle Grand Prix..

Mar.10 - F1 veterans have revealed they disagree with reigning world champion Lewis Hamilton's stance about the 'halo' cockpit cage slated for 2017. Some of the Mercedes driver's..