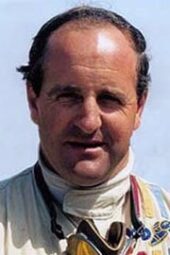 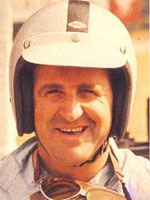 Denny Hulme was the first and only F1 champion from New Zealand to date.

Born in Motueka, New Zealand, on the 18th of June of 1936, Denis Clive Hulme was not your typical Formula 1 driver with a flashy style, but he certainly showed his supreme ability behind the wheel and earned a well-deserved title in 1967.

Like the Great Jim Clark, Hulme grew up on a farm too and learned to drive with a truck at an early age. His involvement with cars started after he did various activities on his father’s farm. At age 17, he quit school and worked as a mechanic and drove around New Zealand transporting cargo. Of course, he loved racing and was eager to enter the racing world and emulate some of the best drivers of those times.

He saw Stirling Moss and other F1 drivers competing in New Zealand’s Tasman Series, which enhanced his nack for car racing.

The racing life began for Hulme behind the wheel of an MGTF and an MGA which was bought by his father Clive —who was a World War II hero—. His first big racing moment came when he earned the New Zealand's Driver To Europe scholarship to compete in Europe during the 1960 season together with George Lawton.

In his first season in Europe, Hulme finished third whilst driving an Envoy and a Cooper in the Campionato A.N.P.E.C./Auto Italiana d’Europa, a championship won by Colin Davis, who had previously started a couple of Formula 1 races in 1959. Hulme contested two non-championship Formula 1 events in his first year around Europe, were him and Lawton were being helped by fellow New Zealander Bruce McLaren, who was already a race winner in the pinnacle of motorsport.

Lawton tragically died in their first year in Europe, but Hulme kept going to try and find the chance to compete in Formula 1. Working as a mechanic for Jack Brabham, who already was a two-time Formula 1 champion, Hulme got to drive Brabham’s cars too. 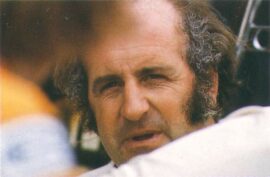 After racing Brabham cars in junior Formulae and in a couple of non-championship F1 events between 1963 and 1964, Hulme made his official F1 debut on the 30th of May of 1965 during the Monaco Grand Prix, which was the second race of the season.

He competed in six races in 1965 onboard Brabham-Climax cars, scoring points only twice. In the first two races of 1966, his car was equipped with Climax L4 engines and retired both times. Then, the Repco engines proved to be successful for the Brabham team as Hulme got his first podium in the 1966 French Grand Prix.

Hulme scored three other podiums as Jack Brabham achieved his third World Drivers’ Championship. The New Zealander finished fourth in the standings of 1966.

In a 1967 season dominated by Jim Clark statistically, Hulme and his teammate Brabham found a way to consistently score points and fight for the title. Hulme took the first win of his career in the 1967 Monaco Grand Prix, where he lapped all his rivals —in that race, Ferrari’s Lorenzo Bandini lost his life—.

He added another victory to his solid 1967 season with a great drive at the Nürburgring to take the 1967 German Grand Prix.

Despite Clark’s incredible velocity and possibly being the best driver of 1967, Hulme and Brabham entered the final race at Mexico as the only drivers with the chance to take the title home.

Hulme was the championship leader heading into the final race of the season and needed a top-four finish to clinch his title, while Brabham needed the victory and his teammate finishing fifth or worst.

For Sunday’s race, Clark took Pole Position while Brabham and Hulme lined up fifth and sixth respectively. In the race, Clark dominated clearly, while Brabham climbed up to second, although a minute and 25 seconds behind, which was not enough to take the WDC from Hulme, who finished third and found Formula 1 glory in his third season.

Hulme was the first of just two champions to win the title without achieving one Pole Position during the season (Niki Lauda repeated it in 1984). 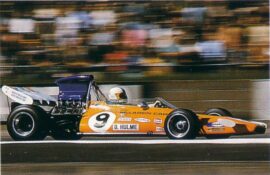 He left Brabham to reunite with his friend Bruce McLaren, who had already created his own team. Hulme became the first McLaren driver different to Bruce himself. After a couple of rough seasons to start the team’s history, 1968 was solid. McLaren gave his own team its first win at the 1968 Belgian Grand Prix, then, Hulme added two more in the final stage of the season, at Italy and Canada.

For the final race of 1968 at Mexico, Hulme had a chance to win the title again as he fought Lotus’ Graham Hill and Matra’s Jackie Stewart. He qualified fourth for the race, but the title went to Hill after suspension trouble hit Hulme’s McLaren M7A and Stewart had mechanical issues too.

Although his first year alongside his friend was promising, F1 success was hard to find in the following seasons. However, in the Can-Am Series, they were truly successful, with Hulme and McLaren winning two titles each between 1967 and 1970.

Bruce McLaren died in a crash at Goodwood in the 2nd of June of 1970 at the age of 32. Denny suffered for his friend’s tragedy and started to pay attention to the dangers of racing. He ultimately retired from Formula 1 in 1974, after competing in his seventh season with the team of his beloved friend, which he gave six of its first nine wins in the pinnacle of motorsport. 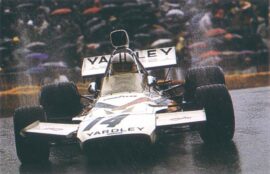 Hulme’s best season for McLaren in terms of points and podiums was 1972, when he finished with 39 points, a win and six other podiums. However, he finished just third in the WDC and far behind the champion —and his future teammate in 1974— Emerson Fittipaldi.

The 1967 World Champion continued racing in various types of auto car racing long after his retirement from the top circus.

Other race series and death

Also, before and during his F1 career, he found time to compete in four editions of the Indy 500 —without success—, three 24 Hours of Le Mans with one class victory in 1961 with a Fiat-Abarth 850 S. He competed in two editions of the 24 Hours of Daytona too, but could not finish the race in those two occasions. After his retirement, he competed 10 times in Australia’s Bathurst 1.000 km race.

During the 1992 Australia’s Bathurst 1.000 km event, when he was the defending champion of his class after winning the 1991 race, ‘The Bear’ Hulme died at the wheel of his BMW due to a heart attack.

‘Probably I was lazy. I should have probably tried a lot harder. The fact that I only got one Pole Position probably proves that I can’t qualify very well, but I do enjoy racing. I enjoy racing better than the practice’.