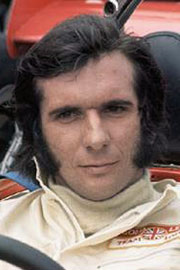 Emerson Fittipaldi won two Formula 1 championship with two different teams. His first was in 1972 when he was driving for Team Lotus. He won his second championship in 1974 when he was McLaren driver.

Fittipaldi was also the first F1 champion from Brazil.

Born on the 12th of December of 1946 at São Paulo, Brazil, Emerson Fittipaldi had all the ingredients to be involved with racing in his entire life. His father Wilson was a motorsport journalist, which is why it was not a surprise for the Fittipaldi family to have Emerson and his oldest brother Wilson entering the motorsport world with passion.

Emerson created a steering wheel for his mom’s car, which generated an amazing business between him and his brother, building car parts and accessories. Then, they started building karts and their driving life began. Of course, Emerson found his way quickly and earned the Brazilian kart title. 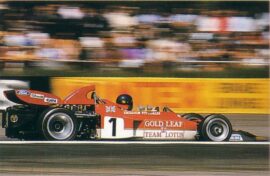 Formula Vee —cars normally powered by Volkswagen Bettle’s engines— became a part of the family when they started building them. Emerson entered the racing series and excelled, winning the championship in 1967.

Fittipaldi left his home in Brazil and travelled to Europe to try his luck as a racing driver who had shown good capabilities in his formative years in Brazil. Sacrifices were made and he had to drop out of the university and his dream of being a mechanical engineer to pursue his racing career.

With a Formula Ford Emerson bought upon his arrival at England, he found success and earned a spot into the Formula Three. Then, he showed competitiveness in Formula Three and Colin Chapman, Lotus F1 Team’s boss, gave him a Lotus seat for the 1970 Formula Two season.

As his progress in the lower Formulas continued, Fittipaldi earned a spot as Lotus third driver behind Jochen Rindt and John Miles.

Fittipaldi made his Formula One debut in the 1970 British Grand Prix at Brands Hatch. He qualified 21st and finished eighth in a race won by his teammate Rindt. In his second Grand Prix, at Hockenheim, he qualified 13th and moved up to fourth place on race day.

After Fittipaldi’s third F1 race, at Austria, Rindt —the championship leader at the time— died in a sad crash at Italy. Miles retired immediately and Lotus did not participate in the Italian and Canadian Grands Prix.

The devastated Lotus Team returned to the track at Watkins Glen for the 1970 United States Grand Prix with Reine Wisell as Fittipaldi’s teammate. Driving the Lotus 72C, the Brazilian rookie qualified third for the race. After a tricky start due to a light rain prior to the start, Fittipaldi fell down the order but he fought back and took the lead after Jackie Stewart and Pedro Rodríguez had mechanical issues on their car.

Fittipaldi took the lead at the end of the 100th lap and won the race, which sealed Rindt’s posthumous World Championship and Lotus’ Constructors’ Championship, both emotional to the entire paddock, especially for Chapman and his team.

The 1971 season saw Fittipaldi establish himself into Formula 1, although he could not take a single victory in the year. Three podiums, at France, Great Britain and Austria, and finished sixth in the WDC with 16 points. 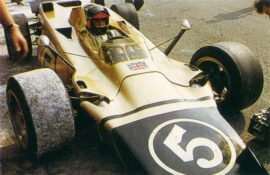 Emerson Fittipaldi driving the Lotus 56B in Italy (1971)

As Lotus’ leader for the 1972 season, Fittipaldi took the Lotus 72D and made the best out of its speed. After qualifying fifth for the inaugural race of the year at Argentina, he retired due to suspension issues. After that setback, he had a streak of six consecutive podiums which included victories at Spain, Belgium and Great Britain. In the 1970 Monaco Grand Prix, he took the first Pole Position of his career and finished third.

Then, he qualified third for the German Grand Prix but retired due to gearbox woes. After eight races. Fittipaldi had a comfortable WDC lead over Stewart. With consecutive victories at Austria and Italy, the Brazilian became the youngest World Champion at the time. Also, he helped Lotus clinch the Constructors’ Championship, the team’s fifth manufacturers title.

He became the first Brazilian to win the World Championship too.

A streak of six consecutive podiums to start 1973, behind the wheel of the 72D and 72E, had Fittipaldi comfortably ahead in the championship lead. In fact, in the first six races of 1973, he had seven more points than what he had at the same point in 1972. However, in the remaining nine races on the calendar, he only scored two podiums and two other point-scoring finishes. Fittipaldi had to settle with second in the 1973 WDC behind Stewart.

As he left for McLaren for 1974, Fittipaldi was ready to fight for the title again, although McLaren had not won a championship at that point and had won eight Grands Prix.

The year started well for McLaren, with Fittipaldi’s teammate Denny Hulme winning the inaugural race of the season at Argentina. The Brazilian bounced back after his 10th place at Argentina with a solid drive at his home race, where he won from Pole Position. 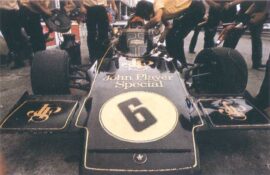 Two other wins, at Belgium and Canada, plus four other podium finishes gave Fittipaldi the chance to win the championship in the final race of the year, the United States Grand Prix. He entered the last race tied at 52 points with Ferrari’s Clay Regazzoni, while Jody Scheckter was sitting three points behind them in his Tyrrell.

In the last race, Fittipaldi needed to finish ahead of Regazzoni, as long as it was in fourth place. If he finished fifth or sixth, then Scheckter had to finish second or worst and Regazzoni to sit behind the Brazilian for him to deliver McLaren’s first title.

If Fittipaldi did not score points, he needed Regazzoni to do the same and Scheckter not to win the race.

Ultimately, Fittipaldi finished fourth in a tragic race that took the life of Helmuth Koinigg. With Regazzoni out of the points and with Scheckter with no chances, Fittipaldi gave McLaren its first Formula 1 World Drivers’ Championship. Emerson also helped McLaren defeat Ferrari in the Constructors’ Championship.

In 1975, Fittipaldi won the first race of the season at Argentina and took another victory at Great Britain. Four other podiums helped him finish a distant second in the WDC behind Niki Lauda.

Fittipaldi suddenly left McLaren to join the family team, the Copersucar-Fittipaldi and the Fittipaldi Automotive squad, in 1976. The move, predictably, did not produce stunning results for the Brazilian champion and his Formula 1 career became full of ordinary results. In 1978, he scored the first podium for the team at Brazil. Then, he added another podium in the United States Grand Prix West. 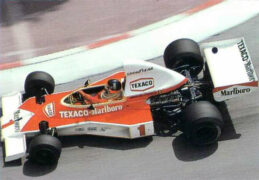 Fittipaldi retired at the end of 1980 and started to look for ways to make the team competitive, but the team did not make it past 1982.

The two-time F1 champion continued his career in the United States with high success. He won the 1989 Indianapolis 500 and also won the CART/Indycar Championship in the same season. Then, he continued racing in the US and enhanced his legend with another Indy 500 win in 1993.

After 14 seasons, he retired from the American category in 1996 after a heavy crash left him with a broken neck. While recovering, a plane crash gave him back injuries which simply make him retire from any type of racing.

He drove in the World Endurance Championship in 2014 at age 68 and finished sixth at São Paulo.

Fittipaldi is still a somewhat prominent figure in the F1 paddock. The Fittipaldi name continues to produce racing drivers, with his grandchildren Pietro and Enzo making their way in the racing world.

He is still related to motorsport and has even manufactured a Sportscar.

"When I'm sitting in the cockpit of a Grand Prix car or an Indycar, is like if I switch off a plug from the wall of the world. I'm by myself, doing what I know how to do best in life, that's drive fast a racing car. I'm in control of the situation and I'm enjoying, it's a challenge for me and it's just a different world. When I put my visor down and first gear out of the pits, that's it. It's just a fantastic feeling"

Emerson Fittipaldi driving the Lotus 56B in Italy (1971)

Nov.15 - Pietro Fittipaldi says he is close to extending his stay as a Haas test driver. The 23-year-old grandson of F1 legend Emerson Fittipaldi combines his work with the..

Ferrari still wants Sebastian Vettel to win races. That is the view of former double world champion Emerson Fittipaldi, even though last time out at Sochi, Ferrari ordered Vettel..

Jo Ramirez 2019 Beyond the Grid interview

He may not be a household name, but Jo Ramirez is one of those people who has seen it all and worked with them all. He broke into F1 in the 1960s, working with emerging superstar..

F1 legend Emerson Fittipaldi is expecting Fernando Alonso to return to F1 next year. Currently, Spaniard Alonso is not in Melbourne this weekend but instead in Florida, where he..

Haas to use Dallara simulator from 2019

Haas is stepping up its simulator programme for 2019. Until now, the small American team has used the Ferrari simulator at Maranello. But according to boss Gunther Steiner, Haas..

Emerson Fittipaldi 2018 Beyond the Grid interview

In this episode of Beyond the Grid, Tom Clarkson talks with the legendary 2 times drivers WC from Brazil: Emerson Fittipaldi Fittipaldi drove F1 from 1970 until 1980. He drove for..

Fittipaldi to attend all races for Haas in 2019

Nov.11 - Pietro Fittipaldi, the grandson of former world champion Emerson Fittipaldi, will be the reserve driver for Haas in 2019. The American team already had its eye on the..

Nov.1 - F1 legend Emerson Fittipaldi thinks Fernando Alonso could have a title-winning car on his hands next year. The once-great British team is switching from Honda to Renault..

Oct.17 - Niki Lauda has backed Max Verstappen's driving during the recent Japanese grand prix. Initially, Mercedes lodged a protest against the Dutchman's defensive move in his..