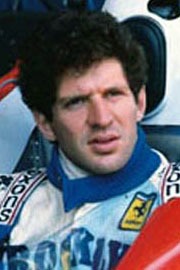 Jody Scheckter is the one and only South African Formula one champion.

Born on the 29th of January of 1950 at East London, South Africa, Scheckter’s name at first was a synonym of danger in the racing world, but he managed to flip the script and made himself a Formula 1 World Champion for Ferrari.

His motorsport journey began due to his family ties with cars. His father had a Renault dealership in which he worked and had his first taste behind wheels. Out of control during his first couple of racing events, Scheckter showed speed but also kept an uncontrolled image inside the tracks. After trying bikes, cars came in and became the only option for the South African speedster.

Though he was fast, his driving skills were still a little erratic. At 20 years of age, Scheckter earned the trip to Europe after winning the South African Formula Ford Series, which gave the chance to travel to England for the winner and have a taste of the European categories.

His speed gave him the chance to make his Formula 1 debut in the last race of 1972, with McLaren. He qualified eighth for the race, the United States Grand Prix, and finished ninth behind the wheel of the Ford-powered M19A.

In 1973, he won the 1973 SCCA L&M Championship, an American Sports Car championship. McLaren gave him more shots at Formula 1 events, but his participations proved to be tumultuous. 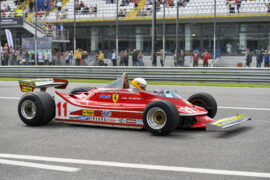 He qualified third for his home race, the 1973 South African Grand Prix, in just his second F1 start. However, engine troubles left him in only ninth place. Then, he returned to the grid for the 1973 French Grand Prix.

He started from second place and took the lead of the race ahead of reigning World Champion Emerson Fittipaldi. As Fittipaldi tried to overtake on lap 41, the South African shut the door closed and they collided, which ended Fittipaldi’s Grand Prix and prompted an outrageous reaction from the Brazilian. The reigning champion insulted Scheckter and even said he did not belong in the F1 paddock.

Then, in the next race, the British Grand Prix at Silverstone, Scheckter’s name was in everyone’s mouth again. In the first lap, the South African spun at Woodcote Corner while in fourth place. His mistake prompted a disaster between other cars. Ultimately, 11 cars retired from the race due to the collisions and Andrea de Adamich, a driver for Brabham, suffered a leg injury.

With Scheckter blamed for the disaster and considered dangerous for others, some drivers and other members of the paddock wanted him banned from the sport. McLaren, however, decided to just put him on the sidelines for a while.

After missing four races, Scheckter returned for the last two rounds at Canada and the USA. At Canada, he collided with Francois Cevert, who was supposed to be his Tyrrell teammate in 1974.

In the US, during the weekend of Cevert’s tragic death, the South African qualified 10th but could not finish the race due to suspension woes.

His move to Tyrrell for 1974 proved to be effective for Scheckter as he was able to reach the podium for the first time in the 1974 Belgian Grand Prix. After consecutive podiums, at Belgium and Monaco, Scheckter was able to taste the sweet flavour of winning as he took an exciting first victory at the 1974 Swedish Grand Prix with a three-tenths gap over his teammate Patrick Depailler.

For his second career British Grand Prix, Scheckter took a dominant victory over the driver who thought he did not belong, Fittipaldi. Third place in the 1974 Italian Grand Prix at Monza had Sheckter in contention for the title heading into the final round.

For the last race, he needed to win with Clay Regazzoni and Fittipaldi finishing fourth and fifth or worst. Ultimately, Regazzoni and Scheckter had mechanical issues and the Brazilian took the title.

The 1975 season saw a struggling Tyrrell-Scheckter combo. Although Scheckter won the 1975 South African Grand Prix, his home race, that was only one of four point-scoring finishes for him during the year. Scheckter finished seventh in the championship with 20 points, but another title challenge was waiting for him in 1976.

Scheckter had a solid 1976 with a victory in the 1976 Swedish Grand Prix, five podiums and 11 top-five finishes in 16 races. However, even with such a good season, he only managed to finish a distant third in the WDC behind James Hunt and Niki Lauda.

For 1977, Scheckter moved to the Wolf team and surprised everyone with victory in the inaugural race of the season at Argentina. Another win, this time at Monaco, meant he finished in the podium in five of the first six races of the year and was the championship leader.

Four straight retirements —two due to mechanical issues and two crashes— after his Monaco win, hindered his championship chances. He finished on the podium three more times and won at Canada, but Lauda’s second title in three years was secured.

Nine podiums and three wins were good enough for second in the standings. A down 1978 with Wolf, scoring just four podiums and 24 points, preceded a move to Ferrari for 1979. After his first winless year since 1973, Scheckter took the Ferrari 312T4 and made the best of it.

The Flat 12 engine was efficient, the Grund Effect on the car was on point and the driver had the experience to compete for the main goal, the championship. After two tough South American rounds at Argentina and Brazil, Ferrari soon became the team to beat. Consecutive 1-2 finishes at South Africa and the US Grand Prix West —both led by Gilles Villeneuve— meant Ferrari had a solid year in front of them.

As Villeneuve had scored points only three times out of the first seven GPs, the advantage was on Scheckter’s side. In the remaining eight races, only the best four results mattered.

In the 1979 Italian Grand Prix, Scheckter led a 1-2 for Ferrari which sealed both the Drivers’ title for him and the Constructors’ Championship for the team. Villeneuve and Scheckter had a cordial season and the race at Italy just finished a perfect season for Ferrari.

In 1980, Ferrari had a dismal year without any podium finishes. As Scheckter finished 19th in the standings with just a couple of points, he retired from the sport. He has revealed that after seeing Cevert’s death in 1973, his participation in F1 was all about saving his life.

Having achieved the championship, he had nothing else to prove and was ready to enter other sorts of competitions: the business world. He had tremendous success in business in his post-racing life.

After entering the business side of life with a security company and selling it, farming became his life. He supported the racing careers of his sons Tomas and Toby.

The Scheckter family had racing written all over it, as Jody’s oldest brother Ian also competed in Formula 1 racing in the 1970s.

Scheckter’s title in 1979 was the last for a Ferrari driver until Michael Schumacher’s first championship with the team in 2000.

“I didn’t care —about his peers turning against him after the crash in the 1973 British Grand Prix—. I was just trying to win races and go as fast as I can so, they could say what they like. It didn’t hurt my feelings, as I remember.”

Oct.8 - As Lewis Hamilton looks to match and beat Michael Schumacher's all time records, the jury is still out regarding the British driver's greatness. F1 legend Sir Jackie..

They’re the most storied team in Formula 1 history, the one that’s been around the longest, the one with the most wins and championships, the one that generates the most..

1979 World Champion, Jody Scheckter, was the toast of the Italian crowd at Monza on Saturday when he lapped his gorgeous 312T4 shortly before F1 qualifying. Back at his Milan..

Jody Scheckter 2019 Beyond the Grid interview

Jody Scheckter’s life has been anything but conventional. Having arrived in Britain from South Africa in 1970, Jody broke into Grand Prix racing in 1972 with McLaren where he..

Scheckter: Verstappen 'stronger than I was'

Aug.22 - 1979 world champion Jody Scheckter says he sees similarities between himself and F1 sensation Max Verstappen. "Yes, he reminds me of myself in the beginning, although he..

F1 drivers back Hamilton amid controversy

Nov.30 - F1 drivers past and present have leapt to the defence of Lewis Hamilton, as the controversy about his 'backing up' tactics in Abu Dhabi continues. Mercedes is..

The Circuit Gilles Villeneuve has become a favourite with both fans and drivers since it emerged on to F1’s calendar in 1978. It’s long straights, twisty layout and heavy..

Sebastian Vettel says he is "sad" the 2013 season, characterised by his history-making dominance, is now over. But the Red Bull driver does not have much company, made plain by..

Aug.21 (GMM) There is no guarantee Fernando Alonso will secure his third drivers' crown in 2012. That is the view of Brazil's Bruno Senna, who drives for the famous British..