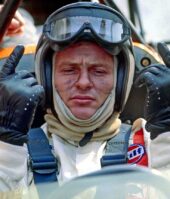 The founder of McLaren is the legendary Bruce McLaren. He grew up in a small town called Remuera in New Zealand. His parents owned a service station and a workshop and his father use to race motorcycles and cars.

As a teenager he spend a lot of time in the workshop of his parents and developed his passion for cars and Motorsport.

At the age of 14 Bruce started to compete in hillclimbing with an Austin 7 Ultster. He entered his first real race at the age of 16 and showed he had good race skills. Bruce also was able to improve and modify the cars he raced himself. His ingenuity was outstanding and together with his race talents he made it to 2nd place in the 1957 New Zealand championship series.

He founded McLaren Automotive in 1963.