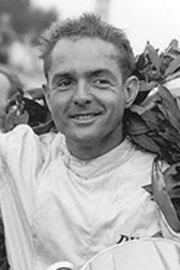 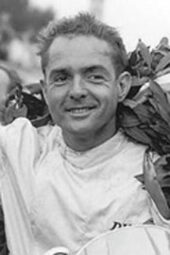 The first and only American-born champion in Formula 1 history, Philip Toll Hill always thought that he had chosen the wrong path for his life. Still, his racing showed his talent was really high and his achievements say a lot about his abilities inside a car.

He was born in Miami on the 20th of April of 1927. Early in his life, he struggled in sports. Then, he entered the music world and started to play the piano. However, piano playing became secondary after his love for cars evolved with fierce intensity.

Hill studied administration at the University of Southern California but spent only two years and dropped out to work as a mechanic. His love for cars continued and in 1947 he was modifying his own MG-TC to start his racing career. The 50s were truly big for Hill, as he made his name relevant in American motorsport due to his success driving Ferrari cars. However, he had trouble accepting the risks of racing, which prompted health issues. He stopped racing for almost a year.

Hill’s career in Europe started with the 1953 24 Hours of Le Mans alongside Fred Wacker Jr, though they failed to complete the race. He competed for Ferrari in the 24 Hours of Le Mans from 1955 on, but his Formula 1 debut with the team happened at the end of the 1958 season. He won the 1958 24 Hour of Le Mans with Belgian driver Olivier Gendebien on the 21st and 22nd of June. Days after, he made his F1 debut on the 6th of July with a Maserati 250F in the 1958 French Grand Prix.

After the deaths of Luigi Musso and Peter Collins, Hill played a big part in helping Mike Hawthorn secure the Drivers’ Championship for Ferrari. Hill scored the first two podiums of his Formula 1 career at Monza and in the last race of the year, the 1958 Moroccan Grand Prix. In the last race of 1958, he was running in second place and left his teammate Hawthorn pass and secure the second place, which sealed the title in Hawthorn’s favour.

Hill’s first full season in Formula 1 was in 1959 and he scored three other podiums, including second place at Monza, and finished fourth in the championship. The 1960 World Championship season delivered the first Grand Prix victory for Hill, when he won the 1960 Italian Grand Prix at Monza, achieving his third straight podium in Ferrari’s home circuit. He had a podium finish at Monaco early in 1960 and he finished fifth in the World Drivers’ Championship.

Hill’s win at Monza in 1960 was the last success of a front-engined car in Formula 1 history. His victory at Italy in 1960 was Ferrari’s only win of the year. The win was prompted by the boycott of the British teams due to the introduction of the Monza banking to the circuit and the risks it represented.

In 1961, Ferrari had the dominant 156 and their drivers, particularly Wolfgang von Trips and Hill, made the best of the opportunities. After the first five races, Ferrari had one 1-2, one 1-2-3 and another 1-2-3-4 finish, which was simply stunning. Hill started in Pole Position in five straight races, from the 1961 Dutch Grand Prix to the German GP at Nürburgring, but only won one of those races (the 1961 Belgian Grand Prix).

After the sixth race of the calendar, Hill trailed von Trips in the WDC by four points. In the seventh race of the campaign, the 1961 Italian Grand Prix at Monza, the two Ferrari drivers were set to battle for the title in the penultimate race. von Trips started on Pole, however, on lap 2 he crashed with Jim Clark and his car flew over to the crowd and 15 persons died, including von Trips himself. The American driver won the race and took the 1961 Drivers’ title. The win gave Ferrari the Constructors’ Championship too, but the scenes were completely saddened by the tragedy.

Hill completed the 1962 season for Ferrari, although his motivation was not there anymore. Before retiring definitely in 1966 (he first retired in 1964), Hill only added three more podiums to his tally in the pinnacle of motorsport. Also, he continued his success in the 24 Hours of Le Mans, reaching three wins in the historied race after wins in 1961 and 1962.

Hill’s career was full of different struggles, from his fear of losing his life, to the horrible weekend at Monza in 1961, where he achieved his greatest racing feat, but the situation was completely clouded by the death of his German teammate and people from the Italian crowd. The Monza bankings weren’t used ever again in Formula One due to the catastrophe.

After he retired from motorsport in 1967, he got married and had three children. He had a classic cars restoration business and had media participations as TV commentator and also wrote articles for a car-related magazine.

"Racing brings out the worst in me. Without it, I don't know what kind of person I might have become. But I'm not sure I like the person I am now. Racing makes me selfish, irritable, defensive. If I could get out of this sport with any ego left I would."