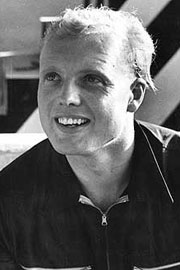 John Michael Hawthorn was born on the 10th of April of 1929 in Mexborough, England. His childhood was surrounded by motorcycles and racing cars, as his father was the owner of a garage at Farnham were racing bikes and cars were fixed for competition.

His love for racing began at nine years of age, although he loved other aspects of life such as spending time with his friends drinking beer and around girls. His father, always involved in racing, gave Mike motorcycles and cars to compete at a young age, thus starting the competitive fire in him.

Known as the Farnham Flyer, Hawthorn started his great racing career in 1950 with a simple yet amazing Riley sportscar which he drove to victory many times. At Goodwood in 1952, Mike entered a Formula Two competition which he won from Pole Position in a Cooper-Bristol car. The opponents? no less than the great Juan Manuel Fangio and Ferrari’s first-ever Grand Prix-winner Jose Froilan Gonzalez.

At that point, there wasn’t a doubt about his racing skills and speed, which pushed him into Formula 1 to compete in five races of the 1952 World Championship season. With a Cooper T20 owned by his father Leslie D. Hawthorn, Mike finished on the podium in his third Grand Prix race, the 1952 British Grand Prix behind the Ferraris of Alberto Ascari and Piero Taruffi.

For the following season, in 1953, Hawthorn was a Ferrari driver alongside Alberto Ascari, Nino Farina, and Luigi Villoresi. His first victory in the World Championship came in the emotional 1953 French Grand Prix. Hawthorn started from seventh place and beat Fangio after a race-long battle which the British driver won by a second. The race was tipped as The Race of the Century for the competitiveness.

He finished 1953 with three podiums and a victory in eight races. His point-tally of 19 positioned Hawthorn in fourth in the standings, behind Ascari, Fangio and Farina, the only Formula 1 champions in history at that time.

For the 1954 campaign, he remained with Ferrari and won another race, the 1954 Spanish Grand Prix. That year was not easy for him, on and off the track. His father died in a car accident and Mike himself was injured in a previous crash in a non-championship race. Between 1955 and 1956, Hawthorn started eight races —three with Ferrari, three with the less competitive Vanwall, one with BRM and one with a Maserati 250F— and only achieved one podium.

Much public scrutiny came his way in 1955 after he won the Le Mans 24 Hours for Jaguar. The controversy began after a late dive into the pits from Hawthorn unleashed an accident which killed over 80 spectators and Mercedes’ driver Pierre Levegh. Mercedes withdrew from the race, but Jaguar did not and Hawthorn won the race. The French press was hard on him, as a picture of Hawthorn celebrating in the podium was a controversial look for the British driver. Ultimately, the blame of the disaster fell on the insecurity conditions of the track.

In the 1957 F1 season, Hawthorn returned to Ferrari to drive alongside Peter Collins and Luigi Musso and finished fourth in the championship with 13 points and two podiums.

Collins, another British driver, became Hawthorn’s friend right away, while the pair had disagreements with Musso regarding money. In their hard-fought battle to achieve more money than the others, Musso, Collins and Hawthorn pushed the limits of the sport and it proved to be catastrophic. 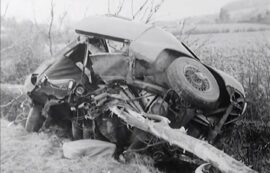 In the 1958 French Grand Prix, Hawthorn won for Ferrari the third and final Grand Prix of his F1 career. The win helped him in his title fight against Stirling Moss. During that race in France, Hawthorn fierce rival Musso lost his life. Two races later, his great friend Collins, died at the Nürburgring.

After achieving only one win compared to Moss’ four throughout 1958, Hawthorn became Britain’s first-ever World Champion thanks to finishing second on five occasions. The key moment of the year occurred in Portugal, the ninth race on the calendar. Having finished second after a great fight with race-winner Moss, Hawthorn was facing disqualification.

Allegedly, he drove in the opposite direction to restart the Ferrari he had spun moments earlier. Moss, who saw the incident, told the officials that Hawthorn did not make anything dangerous. The Ferrari driver's second place was confirmed due to the evidence provided by the gentleman Moss. The seven points Hawthorn collected in that race on the 24th of August of 1958, ultimately gave him the edge in the championship over the great sportsman Moss.

In the last race of the season, the 1958 Moroccan Grand Prix, Moss needed to win and add the extra point for the fastest lap with Hawthorn in third place or lower. Moss won and scored the fastest lap, but Hawthorn finished second ahead of his teammate Phil Hill, who gave him second place to help his title chances.

After his championship triumph by one point over Moss, Hawthorn retired, disillusioned by Collins’ death.

After his retirement, Hawthorn still enjoyed driving cars at high speeds, which proved disastrous for him. He died at 29 years of age after suffering a big crash while driving a Jaguar. His death occurred on the 22nd of January of 1959, just a trimester after securing his World Championship glory.