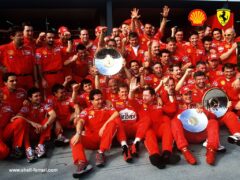 Ferrari celebrates a 1-2 finish at the Australian F1 GP

So, Ferrari can rest at last, its countless millions have yielded the drivers' title for the first time since 1979 when Jody Scheckter won.

And who more fitting to bring them the glory they have sought so passionately than Michael Schumacher?

The first Ferrari to carry a driver to the drivers' title since the 312T4 did the trick for Jody Scheckter in 1979, the F1-2000 was a Ross Brawn-Rory Byrne development from the F310B. With the all-new 049 V10 engine, a narrowed-down chassis and the same high nose,

it was a winner in Michael Schumacher's hands, setting his challenge rolling with three straight wins. He was to score six more, with Rubens Barrichello using his to score his first ever win in the German Grand Prix. Other typical Ferrari features of the time included "periscope" exhausts, one of the many improvements over its predecessor, the F399. 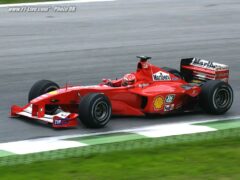 Schumacher was brought in to Ferrari in 1996 on the sport's largest retainer with one aim: to give the team its 10th drivers' title. However, it was no easy matter. Apart from Barrichello swapping rides with Eddie Irvine, with the Ulsterman leaving Ferrari for the Stewart team that was rebadged as Jaguar, the top two teams had remarkable stability in personnel.

Williams had signed 20-year-old Jenson Button straight from Formula Three and changed its Supertec engines for ones from the returning BMW. Another team that had ditched Supertec engines was BAR, back for a second year with Honda engines. Arrows took up one of the Supertec deals and brought in Jos Verstappen. Jordan signed Jarno Trulli from Prost to replace Damon Hill, with Prost signing Jean Alesi and Nick Heidfeld to replace Trulli and Olivier Panis.

As for the previous two years, the battle for honours was between Ferrari and McLaren, and honours looked set for McLaren when the season kicked off at Melbourne, with Hakkinen and Coulthard on the front row. But both McLarens broke and Schumacher led Barrichello home for a Ferrari one-two. Notably, third place went to Ralf Schumacher, the BMW in his Williams stronger than people had been led to believe. Perhaps the largest cheer was from the BAR pit, as they put their point-free debut season behind them with Jacques Villeneuve fourth and Ricardo Zonta sixth. 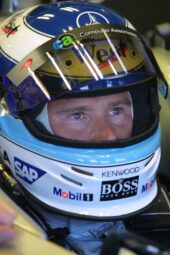 Ferrari's dream start continued when Hakkinen retired from the lead at Interlagos, with Coulthard disqualified from second, handing the place to Benetton's Giancarlo Fisichella ahead of Jordan's Heinz-Harald Frentzen and Trulli, with Button scoring in only his second race. Better still, Schumacher then beat the McLarens fair and square at Imola. So, three races in, and Schumacher had 30 points to Hakkinen's six and Ferrari 39 to McLaren's 10.

Hakkinen had three poles from three before he arrived for the British Grand Prix at a waterlogged Silverstone, but his chance of keeping a 100 per cent record was scuppered when Barrichello mastered drying conditions best to pip Frentzen to pole. Barrichello led to mid-distance, but Coulthard was right on his tail and took over with a great move around the outside at Stowe. The Brazilian then retired with hydraulic failure and Coulthard went on to beat Hakkinen and Schumacher.

Reigning champion Hakkinen wouldn't have reckoned on waiting until the fifth round for his first win, but he got his show on the road with victory in Spain. Coulthard was fortunate to be there, having survived a plane crash that killed his pilot and co-pilot, and showed great bravery in racing with cracked ribs. After the second round of pit stops, Hakkinen took the lead, facilitated by a slow stop for Schumacher. Coulthard then moved into second as Schumacher slowed with a puncture.

The pendulum swung Ferrari's way at the Nurburgring when conditions were perfect for Schumacher to show his wet-weather skills. Hakkinen had rocketed from third on the grid to lead into the first corner. However, five laps in, rain started to fall, and Schumacher took over, staying ahead for his fourth win ahead of the McLaren duo.

Schumacher looked set to make it five wins at Monaco but a leaking exhaust made his suspension collapse. Coulthard was left clear to win. Schumacher's escape from pole in Canada was boosted when Coulthard was called in for a stop-go penalty as his car had been worked on past the 15 second board on the grid. Rain hit mid-race and Schumacher was told to slow because of a possible brake problem. Barrichello closed in, but team orders dictated that he finished behind his team leader. 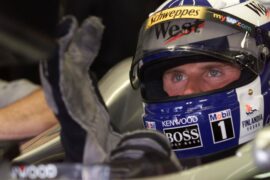 Coulthard gained his revenge at Magny-Cours when he outraced Schumacher for the honours, with Hakkinen claiming second when Schumacher's engine failed. Hakkinen bounced back at the A1-Ring by leading from start to finish ahead of Coulthard.

Schumacher had further first lap disappointment at Hockenheim, this time swerving to the outside after failing to pass Coulthard, only to put himself into the path of Fisichella. Then, with rain setting in, but only at the stadium end of the track, Barrichello elected to stay out and won as Hakkinen pitted for wets. Hakkinen assumed control at the Hungaroring, by making a blinding getaway to lead from start to finish, while Coulthard harried Schumacher to the line.

The greatest overtaking move of 2000 was performed at Spa-Francorchamps when Hakkinen slipstreamed Schumacher up to Les Combes, then squeezed through a tiny gap inside Zonta as Schumacher went outside the Brazilian. It was inch-perfect and his reward was victory.

The Italian Grand Prix was marred by the death of a marshal following a huge accident into the second chicane on the opening lap, leaving Schumacher to win from Hakkinen, with Ralf Schumacher claiming his second consecutive third.

Formula One and the United States were reacquainted after a nine-year break when the circus moved to the Indianapolis Motor Speedway. Schumacher won easily after the chasing Hakkinen's engine failed. 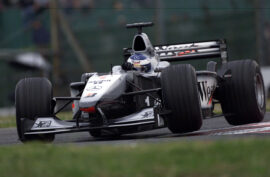 Arriving at Suzuka with an eight-point disadvantage, Hakkinen got the jump at the start, but slick tactics, traffic and a brief shower as Hakkinen emerged from his second stop put Schumacher in front where he stayed to the finish. Schumacher then made it four wins in succession when he pipped Coulthard to the line at Sepang. Michael had moved ahead in the pitstop sequence, when leader Coulthard was forced to pit early after running wide and debris caused his engine to overheat. Hakkinen, on the other hand, moved before the start and his stop-go dropped him to 18th before he advanced to fourth behind Barrichello.

So, Ferrari lifted the Constructors' Cup and Williams proved best of the rest. Jordan fell from third to sixth behind Benetton and BAR who finished equal on points, with Arrows not quite receiving the reward that its marked improvement deserved. Jaguar scored just four points compared to the 36 they scored as Stewart in 1999, but Prost and Minardi failed even to score a point, with the French team looking in particular disarray.