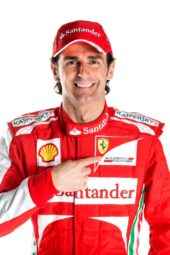 Jan.11 - Fernando Alonso can add a third title to his tally on his return to Formula 1. That is the view of Pedro de la Rosa, a fellow Spaniard who worked with Alonso at both..

Jun.29 - Sebastian Vettel and Fernando Alonso are both in the running to drive for the new Aston Martin works team from 2021. That is the claim of La Gazzetta dello Sport, even..

Formula 1 has a "very big obligation" to get back up and racing, according to former driver Pedro de la Rosa. The sport is planning its first back-to-back 'ghost races' for July,..

Kimi Raikkonen "will not adapt" to a car that doesn't suit his driving style. That is the claim of Pedro de la Rosa, who as test driver worked alongside the 2007 world champion..

As a racer, Pedro de la Rosa competed in more than 100 Grands Prix, and drove many, many more miles as an F1 test driver for the likes of McLaren and Ferrari. And on this..

The 2020 pecking order appears to be Mercedes ahead of Red Bull and Ferrari - and Racing Point's 'pink Mercedes' not too far behind. That is the claim of former long-time F1 race..

McLaren can close the gap to the top three teams in 2020, according to former driver Pedro de la Rosa. De la Rosa, now 48, was a long time McLaren test driver during the team's..

Former F1 driver Pedro de la Rosa does not think Fernando Alonso will return to Formula 1 in 2020. Spaniard Alonso is suddenly back on the radar, as he will meet with McLaren..

Pedro de la Rosa has admitted he is not excited about F1's new rules for 2021. The regulations have not been formally announced, but it is already known that the budget cap figure..

Williams is the only team that is really struggling as F1 heads to Australia for the season opener. That is the view of Pedro de la Rosa, who made his analysis of the 2019 pecking..