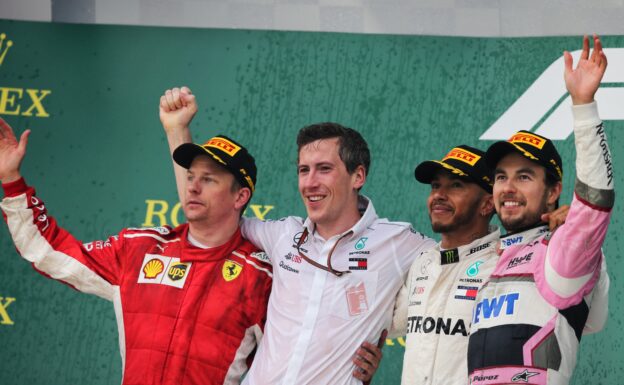 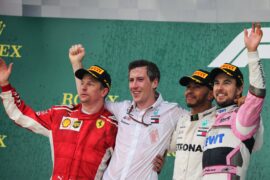 Mercedes driver Lewis Hamilton won the 2018 Azerbaijan Formula 1 Grand Prix for the first time in his career. It was his 63rd formula 1 victory, his first win of the 2018 season and the 78th F1 victory for Mercedes.

At the start all cars got away clean, but In turn 3 of the first lap there were a few incidents which caused the safety car to deploy. Ocon and Sirotkin had to retire, Raikkonen pitted for a new nose and Alonso for a new nose and 2 punctures. Hartley Grosjean, Perez, Magnussen en Ericsson also made did a pitstop.

The safety car returned to the pit at the end of lap 5 and the race restarted when Verstappen passed Ricciardo and had a good fight on his hands with Carlos Sainz in the Renault who was driving on a softer compound and also had passed Ricciardo.

In the 11th lap Hulkenberg hit the wall in turn 7 and retired with a broken left rear suspension. In Lap 16 Carlos Sainz pitted to get rid of the ultra's and return to the track on the soft yellow tyres.

At the beginning of lap 22 Lewis Hamilton had a full lock to get into turn 1 and left the track. He pitted ride after this incident to get rid of the heavy vibrations the flat spots generate. 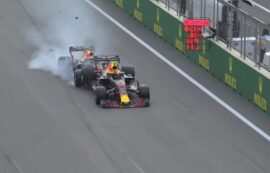 Race leader Sebastian Vettel didn't react to the pitstop of Hamilton and was able to drive good lap times until lap 30, when he got fresh soft tyres to drive to the finish.

In lap 36 Ricciardo had a good tow from his team mate Verstappen on the long straight to pass him with 344 km/h. He pitted for ultra's in lap 38 to attack the guys in front. A lap later Verstappen also got the purple ultra's and came back on the track in front of team mate Ricciardo.

The lap after Ricciardo wanted to pass his team mate again on the long straight with DRS. He did his best, but got blocked by Verstappen and then drove into the back of Verstappen's Red Bull RB14. Both drivers had to retire from the race! The safety car deployed again to clean up the track while Valtteri Bottas was able to pit quickly when the safety car deployed and kept the lead in front of Vettel.

Romain Grosjean had a very bad afternoon when he was waving his car over the track and lost control to crash into the wall behind the safety car when he tried to warm-up his tyres. In lap 4? the safety car came in and Valtteri Bottas got passed by Sebastian Vettel at the end of the long straight to take the lead, but out braked himself and lost 2 places.

Next lap (50) race leader Bottas his right rear tyre blew up and retired his Mercedes from the race, while Sergio Pérez passed Vettel for P3.

Below you can see the how the race went virtually. Watch Sergio Pérez climb to rd place. 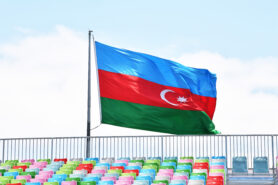 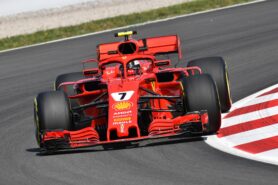