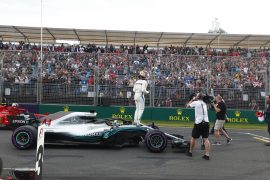 The 2018 Formula 1 season is because of the amount of 21 grand prix, the longest season ever in F1 history.

The schedules below show the 2018 F1 standings according all F1 race classifications of each grand prix event.

F1 has a drivers and constructors championship. Both can be found on this page.

The drivers standings overview shows the amount of wins, poles and podiums.

In the sidebar on the right you can navigate to other Formula 1 seasons. You can go all the way back to 1950 F1 results. The year that Formula 1 started.

Everyone expected another Mercedes vs Ferrari fight for 2018, and to a point, that is what we got until Lewis Hamilton’s dominance showed up in the second half of an exciting and thrilling season.

To start, some new technical regulations were introduced to enhance drivers’ safety, which brought upon us the Halo device. The system consisted of a crown created to further increase cockpit protection and to deflect debris or tyres from the driver’s head.

Though the aesthetics of the halo were not especially the biggest, we saw in certain lower Formula crashes that it worked. In fact, in a heavy crash which involved two-time champion Fernando Alonso and Sauber rookie Charles Leclerc, the halo ended up saving the Monegasque talent after preventing a front-wing endplate of Alonso’s McLaren from hitting the visor of his helmet.

The halo was not developed by each team, as the FIA dictated which were the approved suppliers from which the team would purchase the models.

Despite an amazing Pole Position from Hamilton at Australia in his Mercedes W09, it was Sebastian Vettel who landed the first punch of the year after taking advantage of a Virtual Safety Car provoked by the Haas cars to take the lead and win for the second straight year at Melbourne.

A 1-3 in the first race for Ferrari, with Kimi Raikkonen third, was followed by what seemed to be an easy 1-2 at Bahrain, with Vettel leading. However, it all changed with a horrible pitstop for the Finnish champion, in which a Ferrari mechanic —Francesco Cigarini— had his leg broken by a rear tyre.

Vettel managed to win at Bahrain ahead of Valtteri Bottas and Hamilton, who started behind the order with a grid penalty. In the third race, at China, Vettel was again leading, before Mercedes pulled off an undercut with Bottas. A late Safety Car gave the Red Bull drivers a chance to pit and Daniel Ricciardo emerged as the winner after a series of great overtaking. Vettel finished a lowly eighth after being almost taken out by a desperate attempt to overtake by Red Bull’s Max Verstappen.

For the first time since 2013, Mercedes did not win any of the first three races of the year. At Azerbaijan, Vettel was again on Pole, but a late Safety Car took his lead off and favored Bottas. Vettel attempted to overtake Bottas after the restart and ran wide, allowing Hamilton and Raikkonen through. Bottas then suffered a puncture due to debris and Hamilton went on to take his and Mercedes’ first triumph of the year, but Ferrari still had the better package. Sergio Pérez was third for Force India after taking advantage of Vettel’s struggling tyres in the end.

Hamilton then found his stride and led a Mercedes 1-2 in Spain, with Vettel fourth. Monaco was all about Red Bull. Verstappen crashed out of FP3 and missed qualifying, which was a big blow for him at a track where the RB14 was the dominant car. Ricciardo displayed the car’s capabilities on Saturday with Pole and on Sunday, beating his rivals and an engine issue on his car to take his first victory at Monaco, ahead of Vettel and Hamilton.

Then, Ferrari returned to form in Canada and Vettel added to his two victories with a dominant performance in Montreal, in front of Bottas and Verstappen. After taking only fifth at Montreal, Hamilton struck back at France, in a race in which Vettel crashed into Bottas at the start of the race.

The second race of Formula 1’s first-ever triple header was in Austria, home of Red Bull. Ferrari, Mercedes and Red Bull had taken two wins apiece in the first six rounds, and that was followed for one win for each, as Verstappen delivered another win for the Austrian team in the year and their first at home.

In the 2018 Austrian Grand Prix, the two Mercedes cars retired with mechanical issues after starting 1-2 on the grid. It was the first double-DNF for the Mercs since the 2016 Spanish Grand Prix and the first retirement for Hamilton since the 2016 race at Malaysia, snapping his run of 33 consecutive races in the points, a record at the time.

Hamilton’s Pole at Silverstone was one for the ages, but a tangle with Raikkonen at the start of the race meant he could only recover to P2. Mercedes even made a strategic mistake with a mid-race Safety Car that could have allowed Hamilton to even fight for the win if he pitted, but the team preferred to preserve track position with both cars. In the end, it was Vettel who took his second win at Silverstone and extended his championship lead to eight points ahead of the Englishman.

Hamilton (and love) conquers the win at Hockenheim from P14

It was now Vettel who would be racing at home, with the 2018 German Grand Prix taking place at Hockenheim. Hydraulics problem on Saturday was a blow for Hamilton, and Vettel qualifying on Pole with a brilliant lap only added to the momentum of the German and Ferrari and extended Mercedes’ run of struggles.

On race day, a small shower towards the end of the GP, a reverse strategy and an ill-advised pit stop for Verstappen helped Hamilton escalate up to P4. Vettel, who was leading comfortably, crashed at the Sachs curve and retired. Hamilton stayed out controversially during the Safety Car and gained a lead he would not let go, even when Bottas attempted to overtake with fresher tyres before being logically instructed to hold station. After his great recovery, Hamilton told his team on the radio that “Love conquers all”.

Hamilton recovered the championship lead and went to Hungary looking to limit damages, as it was a track where Ferrari had the best package in 2017 and the 2018 car, the SF71H, was well-suited for tracks with the characteristics of the Hungaroring.

Ferrari dominated Friday and looked favorites, but rain on Saturday meant Hamilton took Pole while Vettel was fourth. Hamilton pulled away in the race, but Vettel had a chance if he could make his reverse strategy work. However, a bad pitstop had the four-time champion battling with Bottas for P2 for most of the race. Hamilton won and extended his lead, in front of Vettel, who had to settle with P2.

Vettel then won with a dominant performance at Spa-Francorchamps ahead of Hamilton and Verstappen. At Italy, Raikkonen achieved his first Pole Position since the 2017 Monaco Grand Prix and even performed the fastest lap ever in terms of average speed —263.587 km/h—.

Hamilton started third and beat both Ferraris on one of his greatest displays of ability. Raikkonen finished second after a good fight and Bottas third. Vettel finished fourth after he spun while battling with Hamilton in the first lap. Both cars touched and Vettel came out worst.

A 30-point lead was great for Hamilton to face a challenging Singapore Grand Prix in which Mercedes was tipped to struggle against Ferrari and even Red Bull. However, one of the greatest Pole laps ever gave Hamilton P1 and a dominant display on Sunday was enough to overcome any deficit he had on the car’s aspect.

Another victory at Russia, this time through team orders, gave Hamilton a commanding 50-point gap over Vettel. The British racer's dominance at Suzuka combined with Vettel’s tangle with Verstappen meant Hamilton could be crowned a five-time champion at Austin.

After Ferrari announced he would be replaced by Leclerc in 2019, Raikkonen performed even better than he had during the year. The Finnish driver won at Austin after a record 113 races without a victory (he had last won the 2013 Australian Grand Prix with Lotus F1).

Hamilton’s third place in the USA was not enough to seal the title, but fourth in Mexico did the trick for him. Hamilton became the first driver to seal his title win at the same track since Alonso did it at Brazil in 2005 and 2006. Also, and most importantly, the Englishman equalled Juan Manuel Fangio’s historical tally of five World Drivers’ Championships won.

The British legend became only the third driver to win at least five World Championships, alongside Fangio and Michael Schumacher (who won seven titles).

The last two races were won by Hamilton to tie his career-high of wins in a single year with 11. At Brazil, Hamilton won after Verstappen clashed with Esteban Ocon’s Force India, who was trying to unlap himself. The win at Brazil sealed Mercedes’ fifth straight World Constructors’ Championship, which was their hardest yet, with Ferrari having arguably the best package in most races.

At Abu Dhabi, the Englishman did dominate from Pole to seal a year full of glory.

An extraordinary season saw an entertaining fight between the pair of four-time champions, with the victor joining a select group of legendary Formula 1 drivers and further establishing himself as one of the greatest in the history of the Pinnacle of Motorsport.