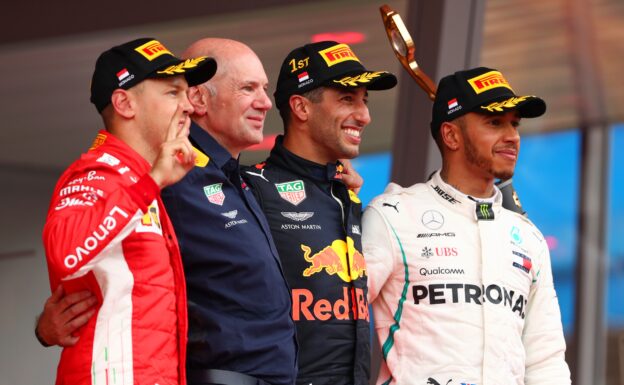 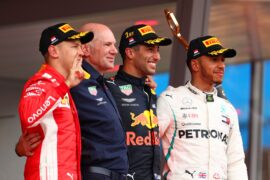 Top three finisher Daniel Ricciardo of Red Bull Racing, Sebastian Vettel of Ferrari and Lewis Hamilton of Mercedes GP pose for a photo with Adrian Newey, the Chief Technical Officer of Red Bull Racing on the podium during the Monaco Formula One Grand Prix at Circuit de Monaco on May 27, 2018 in Monte-Carlo, Monaco.

Daniel Ricciardo won the 2018 Monaco GP today. It was his 7th victory and the 57th for his team Red Bull Racing.

All cars got away clean at the start. P2 starter Sebastian Vettel was quicker in his Ferrari than Daniel Ricciardo's Red Bull RB14, but couldn't pass him.

Lewis Hamilton was the first of the top team drivers that pitted to get rid of the Hyper soft tyres in lap 7 and used the purple Ultra soft tyres. Later on P2 driving Vettel and P1 driver Ricciardo also switched to the Ultra soft tyres.

In lap 28 Ricciardo told his team he was losing power and Vettel got right on his tale. Brave Ricciardo was able to keep Ferrari driver Vettel behind him until the finish in lap 78. Ricciardo probably had a problem with the battery or energy recovery system in his RB14.

On lap 52 Fernando Alonso had to retire with an engine problem on his McLaren. In lap 58 Max Verstappen did an unbelievable move around the outside of Carlos Sainz in the Renault coming out of the tunnel and got 9th place. 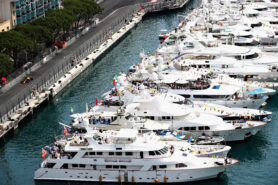 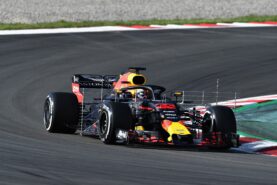