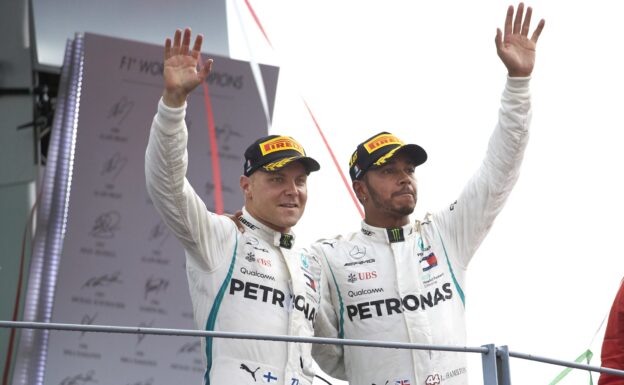 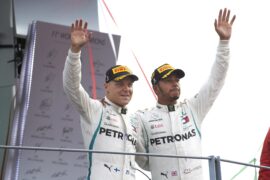 Mercedes driver Lewis Hamilton won the 2018 Italian Formula 1 Grand Prix for the 5th time in his F1 career. It was his 68th formula 1 victory, his 6th win of the 2018 season and the 81th F1 victory for Mercedes.

All cars got away clean from the grid. In the first lap Lewis Hamilton and Sebastian Vettel touched in turn 4, Vettel spun and smoked up his Supersoft  tyres. He rejoined as last and had a busy afternoon, because his front wing was broken and he had to go to the pit. The Ferrari mechanics fitted Soft tyres under the SF71H and Vettel was lucky to return on the track under safety car period.

Max Verstappen had a great start and out braked the Mercedes of Valtteri Bottas in the braking zone of the first chicane for P4. Because of Vettel's spin he moved to P3.

Lewis Hamilton passed the Ferrari of Kimi Raikkonen right after the safety car period ended. He overtook Raikkonen on the start/finish straight, but Raikkonen passed Hamilton right away at the 2nd chicane.

Sebastian Vettel sliced through the the field and drove already on P7 when Raikkonen pitted for new Soft tyres in lap 21. He re-entered the track on P4.

Lewis Hamilton set the fastest lap time as leader to virtually pass Raikkonen before he did his pitstop to get new Soft Pirelli tyres.

The British driver pitted at the end of lap 23 for new tyres, while some rain was falling down in turn 6 and 7. Kimi Raikkonen set the fastest lap time in lap 24 to keep in front of Hamilton who still had to pit. 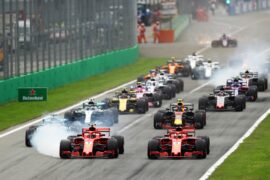 Kimi Raikkonen, Sebastian Vettel, Lewis Hamilton, Max Verstappen and other drivers during the Formula One Grand Prix of Italy at Autodromo di Monza on September 2, 2018 in Monza, Italy.

In lap 24 Ricciardo retired with an power unit failure. Looks like his new C-spec Renault engine wasn't reliable again. He was already driving on P9.

In lap 27 Max Verstappen did his pitstop to go to Soft tyres. He returned on the tarmac on P6 and probably lost his P3 to Vettel, who already was driving on P4.

In lap 28 Bottas got the radio message to keep Kimi Raikkonen behind him. In lap 28 Hamilton went to the pit to the pit for new Soft tyres and returned as 3rd, because Bottas didn't made his pitstop yet.

In lap 30 the German Ferrari driver pitted for another set of Supersoft tyres, because his left-rear had a major blister on it. On lap 36 Bottas finally did his pitstop. and returned to the track 3 seconds behind Verstappen.

Lewis Hamilton overtook the Ferrari of Kimi Raikkonen in lap 45 for the lead. Max Verstappen got a 5 sec. penalty for hitting Bottas in the first chicane. A hard penalty when you consider it's the second time he looses a podium in his F1 career.

After the race Renault protested the Haas car for an illigal floor. An investigation by the Italian GP stewards concluded that the Haas floor did not comply with the regulations, which had been subject to a technical clarification sent to teams before the summer break. 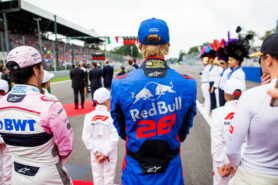 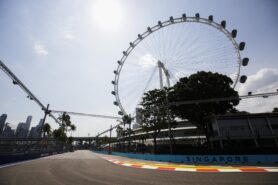