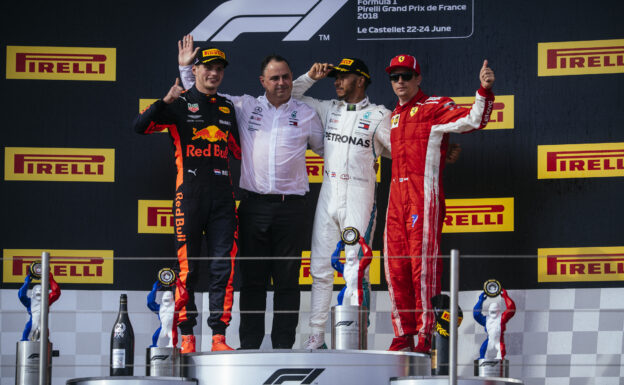 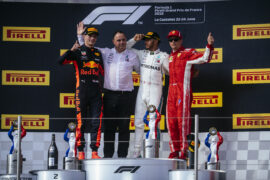 Lewis Hamilton won the French Grand Prix from start to finish. He won his 65th F1 race win. It was the 79th race win for Mercedes and his 3rd win of the 2018 F1 season.

In turn 3 both home grand prix drivers Pierre Gasly and Esteban Ocon collided with their Toro Rosso and Force India car. The safety car came out because their was a lot carbon fiber debris on the track in turn 1 to 4.

After 6 laps the safety car period ended and the race was on again. Bottas and Vettel entered the track as last after their pitstop and had a busy afternoon. Both drivers passed a lot of cars the first part of the race. 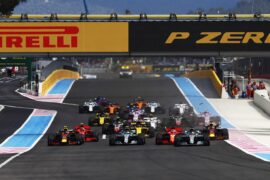 Vettel was already on P5 when Max Verstappen pitted in lap 26 to switch from Ultrasoft to Soft tyres. He was the first of the top 5 who made his pitstop to drive to the finish. Verstappen's teammate at Red Bull, Daniel Ricciardo came in a lap later to get his set of Soft tyres.

A few moments later it was Sergio Pérez who retired from the race with engine problems with the new Mercedes 2.1 version of the power unit.

With 10 laps to go it was Raikkonen who was pushing in his Ferrari on his Supersoft tyres to steel away the podium of Ricciardo and Red Bull. Raikkonen had better traction out of turn 6 and passed Ricciardo with DRS on the Mistral straight to the podium.

In lap 51 Williams driver Lance Stroll had a dramatic moment when his left front tyre blew up in the fastest corner of the circuit. Stroll retired his car and caused a Virtual safety car period, then Fernando Alonso also had to retire his McLaren with a broken left rear wheel.

In the last lap the VSC ended and Hamilton won the race, with Verstappen winning his 3rd podium in 4 races and Raikkonen as 3rd. 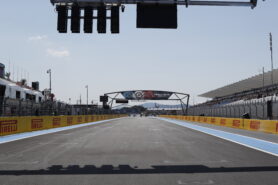 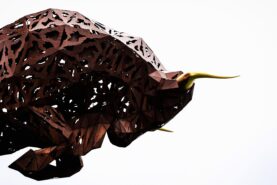