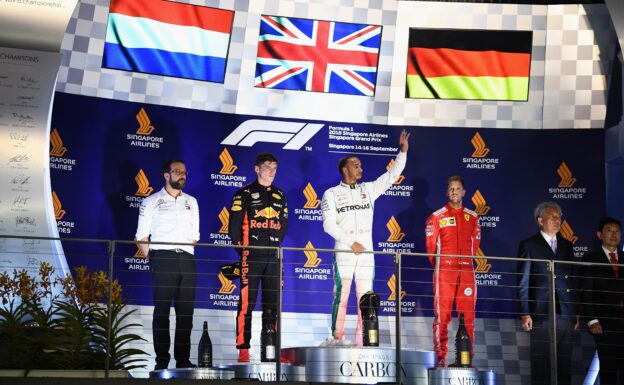 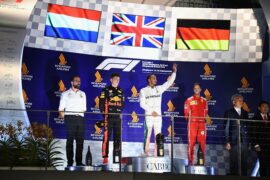 Top three finishers Lewis Hamilton, Max Verstappen and Sebastian Vettel celebrate on the podium during the Formula One Grand Prix of Singapore at Marina Bay Street Circuit on September 16, 2018 in Singapore.

Mercedes driver Lewis Hamilton won the 2018 Singapore Formula 1 Grand Prix for the second time in a row and the 4th time in his F1 career. It was his 69th formula 1 race win, his 7th win of the 2018 season and the 83rd F1 victory for Mercedes.

The start of the 2018 Singapore was without any incidents until the 2nd corner. At the start Sebastian Vettel, who started 3rd was on the clean side of the track. The Ferrari had a better start than Max Verstappen on P2, but could pass the Red Bull yet. On the long straight after turn 5 Vettel passed Verstappen on horsepower for P2.

In turn 3 after the start Sergio Pérez and Estebaon Ocon collided. Ocon lost control of his Force India and slammed into the barrier, broke his left front suspension and had to retire.

The safety car came out and was on the track for 4 laps, so the marshals could clean-up the track. After the safety car came in nothing strange happened until lap 15 when Vettel boxed for Ultrasoft tyres. Hamilton who was driving on P1 answered one lap later and went in to get yellow Soft tyres and gave the lead to Verstappen. Vettel got stuck behind Sergio Pérez on P6 and lost a few seconds there.

In lap 17 race leader Verstappen pitted for new Soft tyres and took over P4 from Vettel when he came out the pits. Kimi Raikkonen did his pitstop in lap 23 and returned on the track on Soft tyres. 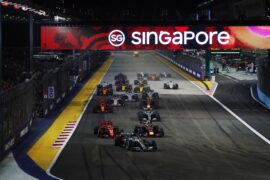 Red Bull driver Daniel Ricciardo drove an amazing 27 laps on the Hypersoft tyres and switched to Ultrasofts to return to the Singapore circuit on P6.

Sergio Pérez was behind Sergey Sirotkin for a long time. In lap 34 he was driving along side the Williams driver to pass him for P13. Perez was probably very frustrated and turned into the Williams and caused a collision which gave him a puncture. Sirotkin was able to continue, but had damaged floor that compromised his lap times. Pererz got a drive through penalty for his driving error.

Sirotkin who was fighting with Romain Grosjean for P14 held up race leader Hamilton in lap 38. Hamilton even had to defend his place against Verstappen, who had closed the gap and almost overtook him. Grosjean later got a 5 second penalty for ignoring blue flags.

At the end of the race, with 10 laps to go Ricciardo was putting pressure on Raikkonen, who closed his gap to Bottas and got under 1 sec to use his DRS. The pressure caused a lot of stress to Bottas who was complaining on the radio about not enough blue flags. 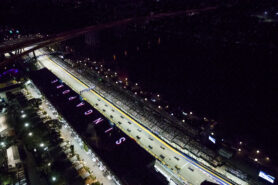 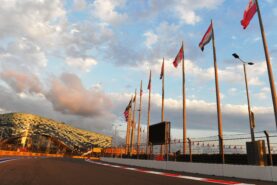