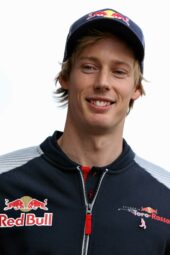 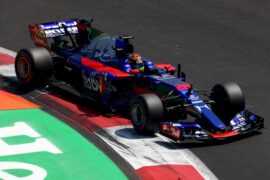 In 2017 Red Bull wasn't happy anymore with the Renault V6 power unit that broke down very often lately. McLaren had enough of their Honda power unit nightmare, that took them down like a torpedo. The rule said for 2018 that an engine is only allowed to 3 teams, Red Bull had to think of a plan to switch engines with McLaren.

So they did Toro Rosso would get Honda engines in 2018 and McLaren would get Renault engines and to do Renault a favour, Carlos Sainz jr. was lent to the Renault factory team to replace under-performing Jolyon Palmer.

Brendon Hartley who was a former member of the Junior Red Bull team was asked to fill-up the empty seat to look if he could cope with the pressure and performance demand of Formula 1. He did well and could stay for 2018 and became team mates with Pierre Gasly. 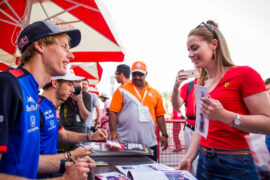 His 2018 was a very tough one. He retired 7 times out of 21 races and has a to face a lot of engine penalties. Honda was developing their power unit rapidly to use it in the Red Bull of 2019. Hartley's power unti got replaced 8! times and he almost had to start last because of that. I also had a lot of bad luck and a very good teammate in Pierre Gasly. The New Zealand driver was out-qualified by 14/7.

Brandon did score 4 points and ended up as 19th in the dirvers championship. It wasn't enough for Helmut Marko, who promoted Gasly to Red Bull, while Hartley was replaced by rookie Alexander Albon for 2019 at Toro Rosso.

Brendon Hartley is now the reserve driver for not one but two Formula 1 teams. Ousted by Toro Rosso at the end of last year, the New Zealander has been signed up to replace..

Four drivers will work in the Scuderia Ferrari Mission Winnow simulator during the 2019 season, thus contributing, alongside the race drivers, to the development of the car. They..

Brendon Hartley says it was clear as far back as last year's Monaco grand prix that Red Bull would oust him. The New Zealander was a surprise draft into the junior team Toro..

Brendon Hartley's father has slammed "rumours" the ousted Toro Rosso racer will become a simulator driver for Ferrari. After a year on the grid, Le Mans winner Hartley has lost..

Sebastian Vettel is sure Ferrari will sign up some good new drivers for its simulator. The Maranello team has lost its 2018 development drivers Antonio Giovinazzi to Sauber and..

Sergey Sirotkin could keep his motor racing career alive in the German touring car series DTM. SMP Racing, his Russian sponsor, said the Williams refugee has been invited by Audi..

His F1 adventure may be over for now, but Brendon Hartley says his motor racing career is still very much alive. Having been given a second chance by Red Bull and Toro Rosso, the..

Short video about Toro Rosso Our Kiwi driver takes you around the Yas Marina Circuit, ahead of the last round of the 2018 Formula 1

﻿ Here you see the terrifying crash of Brendon Hartley in the FP3 in Barcelona. Hartley was going real fast in his Toro Rosso when he hit the grass with his left tires and..

A new question mark hangs above the second Toro Rosso cockpit for 2019. Daniil Kvyat has been signed up already, but it is believed Brendon Hartley has been told he is definitely..