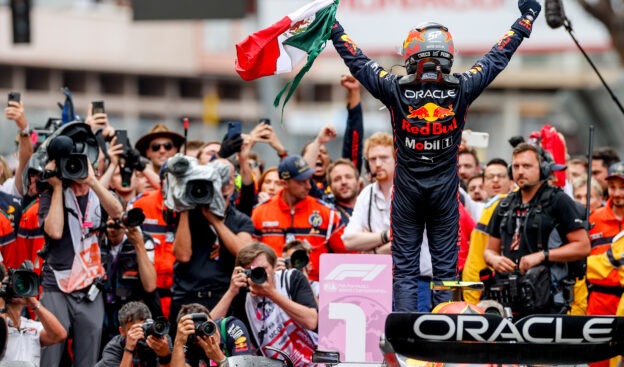 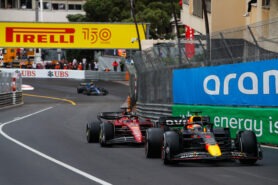 Sergio Pérez scored his 3rd F1 race win today. The Mexican driver won the Monaco F1 GP for the first time. It also was his first race win of the 2022 season. The Red Bull driver started from P3 and beat both Ferraris in front with an undercut pitstop. It was the 80th race win for Red Bull Racing.

Round 7 for of the 2022 Formula 1 season was delayed by one hour and nine minutes, due to standing water and heavy rain around the Monaco street circuit.

The race directors also decided to start the race from behind the safety car and all cars were fitted with full wet rain tyres. Both Canadian drivers Lance Stroll and Nicholas Latifi already had hit the barrier driving behind the safety car. The Aston Martin and Williams drivers drove back to the pits to switch to intermediate tryes and almost collided. Both returned to the track as last.

At the front of the race both Ferrari drivers Charles Leclerc and Carlos Sainz led the Grand Prix. It also had stopped raining and drivers told their team on the radio the track was drying out quickly. Pierre Gasly already pitted after the first lap to get rid of the full wets and switch to intermediate rain tyres to try and get to the front as he now was last. 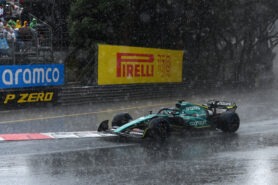 Gasly was a lot quicker on the intermediate tyres and was already on P12 after 15 laps. In lap 17 Perez who was still on P3 tried to undercut Sainz in front of him. The Mexican pitted to get a set of new intermediate tyres. His pitstop only took 2.3s and he got back to the track on P4. One lap the undercut had worked even better than expected as the race leader also pitted for intermediate tyres, but returned to the track already behind both Red Bulls.

Mercedes driver Lewis Hamilton and Alpine driver Esteban Ocon were fighting for P8 as the British driver already had switched to the intermediate tyres and was all over the back of the Alpine, having much more grip than the French driver. The pair even collided in turn 1 and Ocon received a 5 sec. penalty later on in the race for it.

In lap 21 a lot happened. Daniel Ricciardo who was the first driver who dared to switch to the full slick tyres. The McLaren driver was driving on P16 and didn't had much to loose. In that lap Verstappen was catching Leclerc by 3.5 sec. running on P4 and also set the fastest lap of the race up till then. At the end of the lap Sainz switched directly from full wets to the hard slick tyres. Leclerc had the same idea and followed his teammate into the pits to also get a set of slicks. The Monegasque driver now lost a lot of time and shouted to his team over the radio.

One lap later both Red Bulls also pitted for dry tyres. Pérez and Verstappen had got a much better pace on the intermediate tyres and both drivers moved one place. Pérez had even returned as race leader now and was driving just in front of Sainz's. Ferrari. Leclerc who was the race leader for 18 laps now was driving on P4! 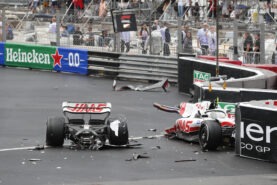 Mick Schumacher didn't finish the race and had a nasty crash again this season. This time he crashed at the  very quick swimming pool section. He later told he was running 10 cm to wide and must have hit a wet patch that spun around the Haas. The car even split in two pieces as hit the barrier. Schumacher could step out unharmed. The race first was slowed down with a virtual safety car and later on with a red flag to recover the Haas and do the much needed pro-tech barrier repairs.

The race was restarted behind the safety car. Both Red Bulls had switched from the hard to the medium tyres, while both Ferraris were still on the 10 laps old hard tyres. At restart the track also had dried out more and Pérez now was able to pull a two second gap on Sainz who still was on P2.

Because the rules say that a GP these days is not allowed to be longer than two hours, the lap counted down changed in a time countdown with 32 minutes to go. Hamilton now was fighting for P7 and right behind the other Alpine of Fernando Alonso. The Spanish driver was managing his tyres and was between three to five seconds slower than the top 6.

With 15 minutes to go Alfa Romeo rookie Zhou Guanyu almost lost control at the end of the tunnel when he tried to pass the AlphaTauri of Yuki Tsunoda. The Chinese driver showed his driving talent and did a double save keeping the Alfa out of the barrier. 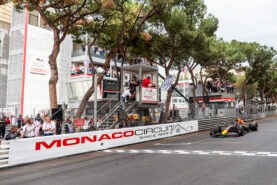 Sergio Perez takes the chequered flag at Circuit de Monaco on May 29, 2022 in Monte-Carlo, Monaco. (Photo by Peter Fox/Getty Images)

7 minutes before the end Pérez's tyres started to grain and he was driving a lot slower pace. The top 4 drivers all closed the gap and drove only 0.5 sec behind each other for the remaining laps of the race. When the time had ran out, the race leaders had to drive one more lap. During this lap there was also some sunlight coming through the clouds again at the principality. 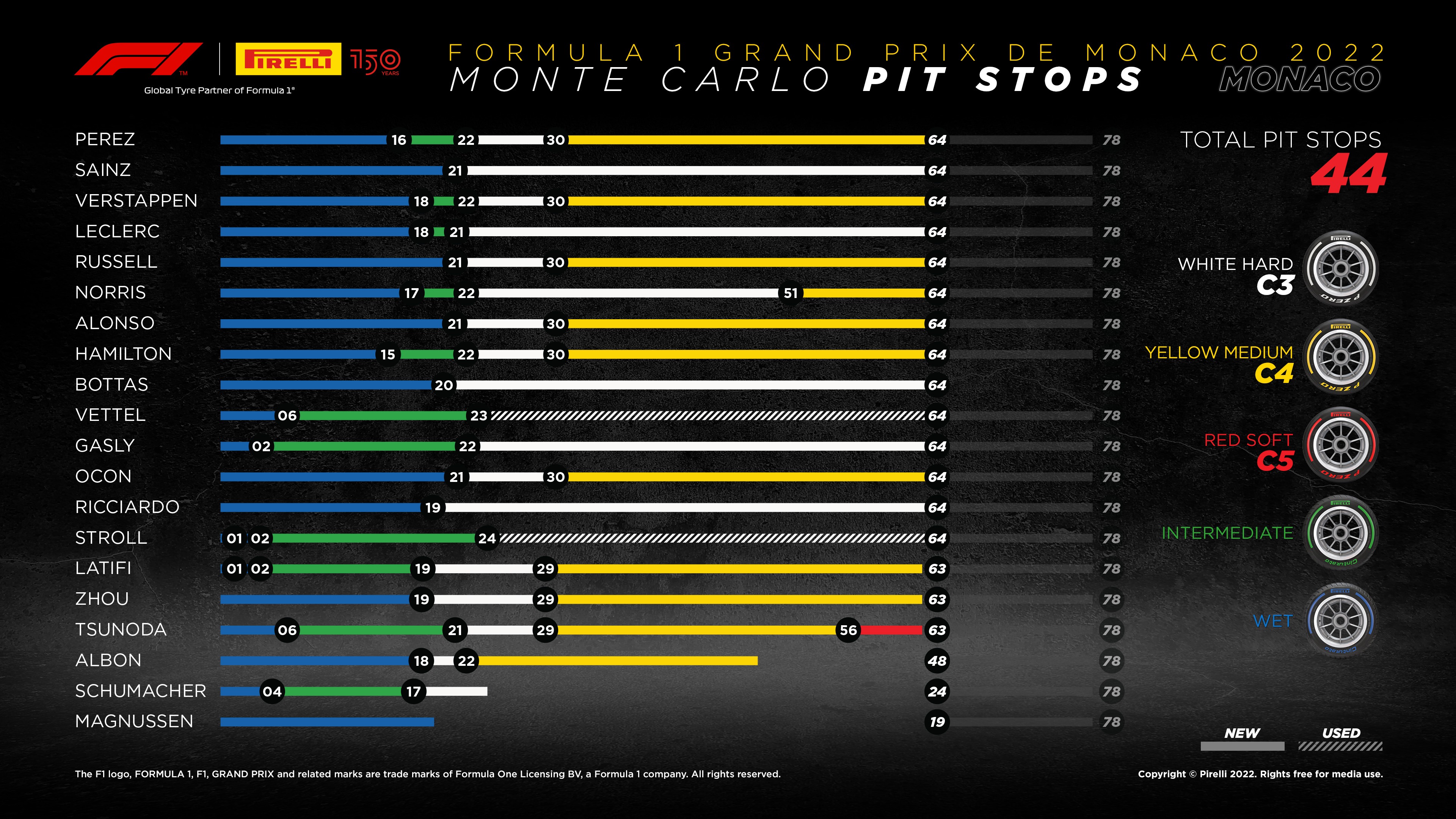 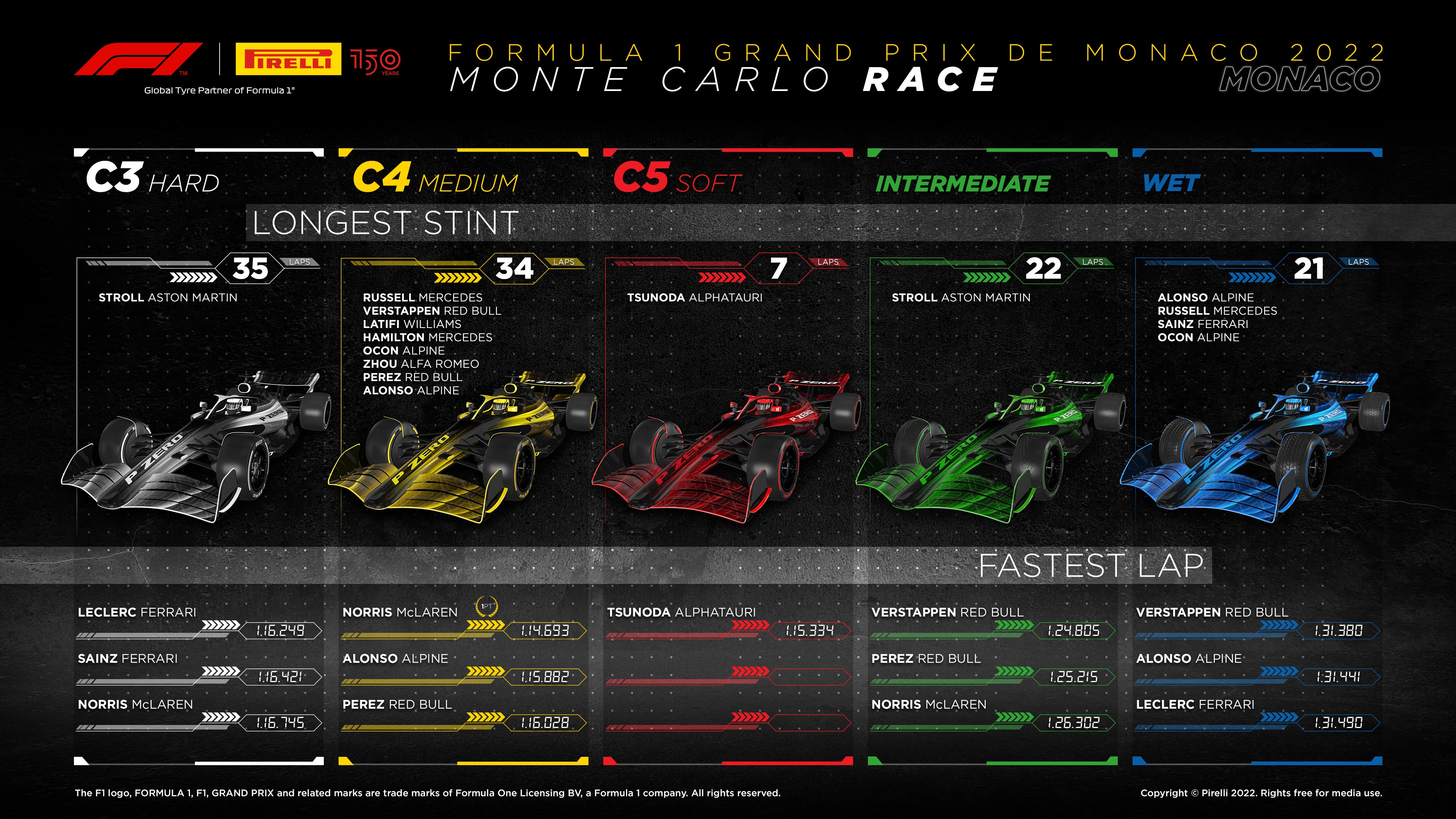 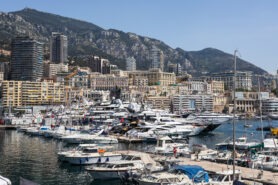 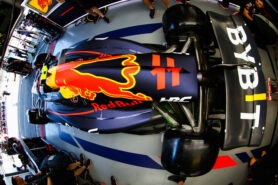