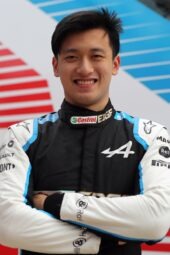 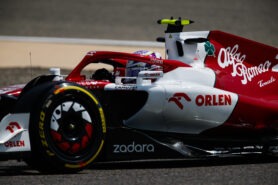 Shanghai-born Zhou began karting at the age of eight and, aged 12, having exhausted the national competition, left China for Sheffield, UK, to compete for Strawberry Racing, where he won both the Super 1 National Rotax Max Junior Championship and Rotax Max Euro Challenge.

Mid-2014, aged 15, Zhou joined the Ferrari Driver Academy after being spotted by the Scuderia Ferrari Formula 1 Team. In 2015, Zhou relocated to Italy to race for Prema Powerteam, contesting the Italian Formula 4 Championship and finishing his first season as Vice-Champion and Best Rookie.

A move to Team Motopark in 2016 to compete in the FIA Formula European Formula 3 Championship marked the start of a three-year stint in the series, which saw him make his return to Prema in 2017, where he stayed for a further season.

At the end of 2018, Zhou left the Ferrari Driver Academy and was awarded the role of Development Driver for the Renault Formula One Team as part of their Renault Sport Academy driver program, now the Alpine Academy. 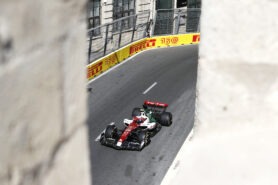 2019 saw Zhou make his FIA Formula 2 Championship debut and a welcome return to the UK with a British team, UNI-Virtuosi Racing, where he finished seventh in his first season, taking the Anthoine Hubert Award for the Highest-Finishing Rookie.

Having shown his dedication, commitment, and talent, in 2020 he was promoted to official Test Driver for Alpine F1 Team. No stranger to breaking the mold, Zhou’s role as a Test Driver makes him the first driver from China to occupy a Formula 1 role within a manufacturer team.

After leading the FIA Formula 2 Championship for UNI-Virtuosi Racing, 22-year-old Zhou made his Formula 1 race weekend debut at the 2021 Austrian Formula 1 Grand Prix on Friday 2nd July for Alpine, taking to the wheel of Fernando Alonso’s A521 for the first Free Practice session.

On 16 November 2021, Alfa Romeo announced Zhou would be making his Formula 1 debut in 2022 as Valtteri Bottas' teammate and Antonio Giovinazzi's replacement.

Debut F1 season with points in the first race

In his first F1 race, Zhou started 15th and finished the race in 10th place, scoring a point in his debut race with Alfa Romeo.

Then, Zhou finished 11th in consecutive races, in Saudi Arabia and Australia with adequate performances. 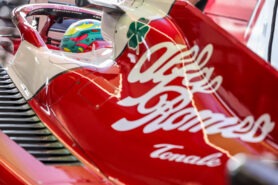 In the 2022 Azerbaijan Grand Prix, Zho qualified six-tenths ahead of his experienced teammate (and great driver on Saturdays) Valtteri Bottas.

Then, he repeated the feat in the 2022 Canadian Grand Prix (he went through Q3 and Bottas didn't, and the difference between the two in Q2 was six-tenths). He went on to finish the race in eighth place, the best result of his F1 career so far.

On 3 July 2022, Zhou suffered a heavy crash at the start of the 2022 British Grand Prix in which his Alfa Romeo car flipped over, and the roll bar failed. The crash looked terrifying, but fortunately, Zhou was fine and was able to race seven days later at the 2022 Austrian GP.

In the rest of the season, Zhou scored one point with 10th place in the 2022 Italian Grand Prix. Although he scored six points, as opposed to his teammate's 49, Zhou did well enough to be announced as a driver for 2023, as the team published on 27 September 2022.

Zho also outqualified Bottas throughout the year and looked quite good in the second half of the campaign. 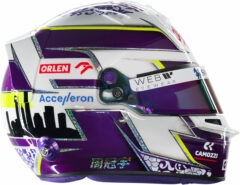 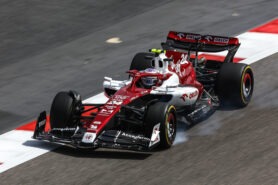 Here you can find the first wallpaper pictures of the Alfa Romeo C43, this F1 car was launched on Sunday 7th of February 2023. This car will be raced in the 2023 F1 season by the..

Zhou unsure F1 can race on in Shanghai next year

Nov.19 - Chinese driver Guanyu Zhou is worried his country's Formula 1 race will be scratched for the fourth consecutive year in 2023. Shanghai is actually back on next year's..

Alfa Romeo F1 Team ORLEN will continue its journey with Zhou Guanyu as the team extends its relationship with the Chinese driver for the 2023 season. During the course of a..

Sep.22 - Guanyu Zhou is still not worried that he will be left without a race seat in Formula 1 next year. The Chinese rookie says Alfa Romeo is "very happy" with him - but the..

Sep.4 - Chinese rookie Guanyu Zhou is not too worried about potentially losing his race seat at Alfa Romeo for 2023. On paper, the 23-year-old does not have a guaranteed deal for..

Aug.12 - The identity of Valtteri Bottas' teammate at Alfa Romeo in 2023 appears to be down to a two-horse race. Frederic Vasseur is personally championing the Sauber team's own..

A 3D recreation of Zhou Guanyu's lap 1 crash at the start of the 2022 Formula 1 British Grand Prix. After careful analysis of the footage and overlaying it on the 3D scene, we can..

Jul.6 - Alfa Romeo's team physio Josef Leberer is confident Guanyu Zhou will be fit and on the grid this weekend in Austria. The 62-year-old, a long-serving Sauber team member who..

Carlos Sainz celebrates after a thrilling race at Silverstone which saw him take home his first win after beating Sergio Perez and Lewis Hamilton to the top of the podium. The..