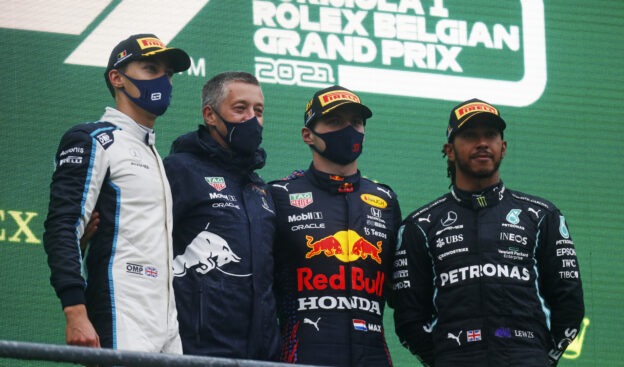 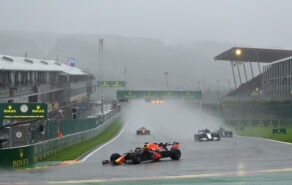 Max Verstappen won his first Belgian F1 GP today it was his 6th race win of the season. The Red Bull Racing driver started from P1 and drove the shortest GP ever of 2 laps behind the safety car. It was the 71st race win for Red Bull Racing.

The start of the formation lap was delayed by 25 minutes due to a heavy rain shower that crossed the track. Red Bull driver Sergio Perez was not on the grid after he crashed on his out lap to the grid at Les Combes. Kimi Raikkonen also didn't start from the grid. The Finn had to start from the pitlane after the Alfa Romeo team decided to fix second gear of his gearbox at Parc Fermé.

After 2 laps behind the safety car the race got suspended by a red flag and all cars had to drive into the pitlane to wait for better track conditions and than start the race.

It took almost three hours before the cars left the pitlane for a second time and even Sergio Perez could restart from the pitlane. The weather was still quite bad and the track was still very wet. The 3 hours time frame that normally is the limit for a GP was even left alone.

The race was started behind the safety car and would took no longer than one hour, but the race got red flagged again after 2 laps behind the safety car. All cars again had to drive into the pitlane to wait for better track conditions, but after a few minutes the news got out that the race would not get restarted today.

Fastest lap: Nikita Mazepin with the Haas in lap 2 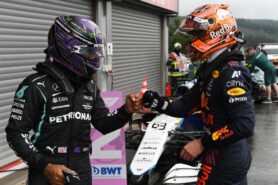 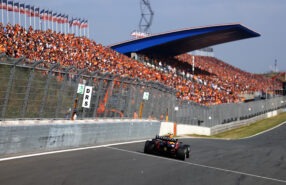