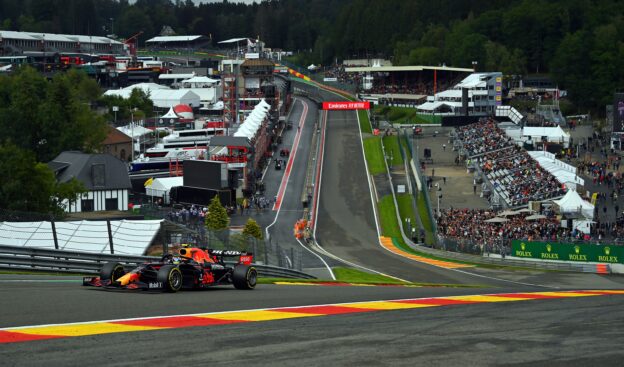 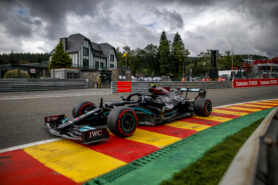 The start of the second practice for the 2021 Belgian GP was quite similar to FP1 in terms of track conditions. The first lap the drivers again used the intermediate tyres after there had been some rain showers before the session.

After a few laps the track had dried out and Lando Norris went in to get a set of hard tyres and was the only driver on the track for a few minutes and clocked 1:47.138 min as quickest lap.

After 15 minutes Nicholas Latifi was topping the leaderboard with the Williams on medium tyres being 0.440s quicker than Esteban Ocon who was on P2 with the Alpine. This all was before any Mercedes or Red Bull clocked a drove a lap.

When both Mercedes and Red Bull drivers had done some laps, Valtteri Bottas was quickest with a 1:44.513 min. second was Lewis Hamilton on 0.031s and Max Verstappen was third 0.614s behind Bottas. Best of the rest was AlphaTauri driver Pierre Gasly 1,5s down on Bottas' time.

Halfway the session the top 3 was still the same, but the gap between them was only still 0.084s all three drivers used the medium tyres.

Fernando Alonso now was 4th quickest on the softs in the Alpine on only 0.440s. Alonso was driving around with a helmet cam, which showed fantastic live footage around the famous track. Later on Verstappen fitted the soft tyres on the Red Bull and snatched P1 by only 0.041s to Bottas after clocking a 1:44.472.

With 16 minutes to go Charles Leclerc caused the session to stop by a red flag when he lost control of the Ferrari SF21 coming out of Les Combes and hit the barrier which wrecked the front-left of the car and the car had to be recovered. The session was restarted with 10 minutes to go.

At the end of the session Verstappen crashed the RB16 coming out of turn 7 when he lost the rear and caused a second red flag situation. The left-rear got severely damaged and couldn't go on. 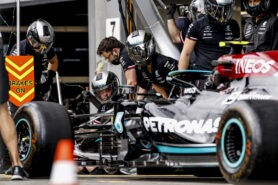 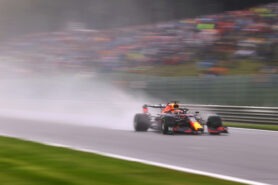