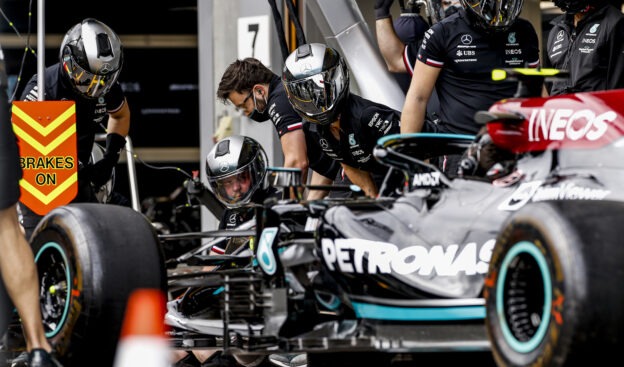 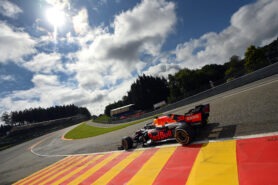 The tarmac was still a bit damp after a rain shower in the morning at the beginning of first practice for the Belgian GP. Carlos Sainz was the first who to get a taste of the circuit with a set of intermediate tyres and other followed his example.

After 9 minutes a lot of drivers switched to slicks, because the track was to dry for intermediate tyres.

Until 15 minutes into the session nobody had set a lap time. McLaren driver Lando Norris was the first who put a lap time on the leaderboard. His first lap time was a 1:50.191 min.

Yuki Tsunoda was the first to cause a yellow flag when he spun the AlphaTauri AT02 at La Source hairpin. The Japanese driver was able to go on, but was blocking the exit of the pitlane for a moment.

Fresh race winner Esteban Ocon was flying in the Alpine on medium tyres. 25 minutes into the session the French driver was the quickest with a 1:47.250 min. Pierre Gasly was second fastest on the hard tyres and only was 0.163s slower. This was until Max Verstappen got out on the track on hard tyres with the Red Bull. The Dutch driver's first quick lap of 1:46.879 min was right away 0.3s qiucker than Ocon's.

Lewis Hamilton's lap time was still 1.3 sec. slower with the Mercedes and was complaining about being 'massively' slow on the straights. One lap later Verstappen even improved by 0,4s and now was 0.744s quicker than his teammate Sergio Perez who now was second fastest.

Hamilton now was even 1.8 sec. slower than his title rival Verstappen. The next lap Verstappen improved another 0,5s and clocked 1:45.905 which was 1.2s quicker than Perez and now was 2.3s quicker than Hamilton who was only on P14.

Williams driver Nicholas Latifi was one of the first who tried out the softest tyres. The Canadian driver clocked the second fastest lap time, but he still was 1.196 slower than Verstappen.

With 15 minutes to go Mercedes driver Valtteri Bottas went out to check out the soft tyres. He clocked a 1:45.199 min. Because a big cloud of rain was approaching the track in the Ardennes Verstappen and Hamilton also put in some laps on the soft tyres. Hamilton was slower 0,1s in sector 1 than Bottas, was quickest in sector 2 and got hold up by Latifi in the end of lap and was still on P16. Verstappen was quicker in S2 than Hamilton, but could not match the time of Bottas who was 0.3s quicker than Verstappen in sector 1.

With 5 minutes to go it started to rain in turn 1 which compromised the lap times of the drivers a lot. Verstappen did improve and managed to get into 0.164s of Bottas on P2. Hamilton had dropped now to P18 and still was 3s behind his teammate's lap time. Hamilton did go out on the red tyres again, but didn't improve and made practice start. 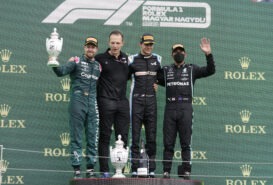 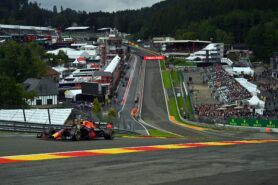