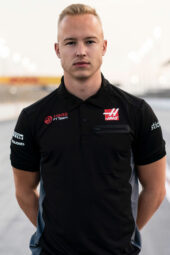 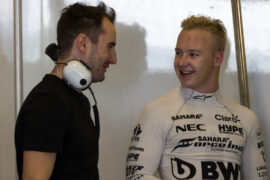 Nikita Mazepin is Haas Formula 1 Team’s driver for the 2021 season, making the step up from Formula 2 after an outstanding 2020 campaign for Hitech Grand Prix where he has already claimed two victories.

Having turned a wheel for the first time aged 7, Nikita Mazepin has risen through the ranks with flying colours. Since making his single-seater debut in 2014, the young Russian has consistently showcased his talent and versatility across various categories.

2018 was Nikita’s breakthrough year as he ended the GP3 Series season as vice-champion. He stepped up to Formula 2 with Hitech Grand Prix in 2019 and then tested for reigning Formula 1 world champions Mercedes, topping the timesheets at the Barcelona mid-season test.

In 2020, Nikita truly came to fore as he narrowly missed out on the Formula 2 title. While the grandest prize may have alluded him, the 21-year-old caught the attention of the Formula 1 paddock with his aggressive overtakes and stunning race pace, which led to wins at Silverstone and Mugello.

For 2021, Nikita becomes the fourth Russian driver to race in Formula 1. On a multi-year deal with the American team Haas, he will make his debut this 2021 season.

In his debut season in Formula 1, Mazepin struggled, along with his point-less Haas team. He was also outperformed by Mick Schumacher, his teammate, with a clear gap in qualifying and in the races. Schumacher outqualified him 19-3 and also finished ahead in 16 of the 22 races.

Sep.21 - Nikita Mazepin says he would not return to Formula 1 with the Haas team. The American team's boss Gunther Steiner admitted at Monza recently that he had received..

Sep.19 - Nikita Mazepin insists he will not return to Formula 1 if it means denouncing Russia. A renewed controversy surrounding the Ukraine conflict has emerged in Russia, with..

Kvyat says he can race despite Russian sanctions

Jul.31 - Daniil Kvyat says he can return to international racing categories even despite the purge of Russian drivers and athletes from the world stage. Nikita Mazepin and his..

Jul.21 - Russia's top motor racing official has slammed the "dishonourable" FIA for kicking the country out of Formula 1. Not only was F1's contract for its annual race at Sochi..

Jul.15 - Nikita Mazepin says he has filed suit against Haas for unpaid wages in a Swiss court. We reported about the axed Russian driver's decision to pursue legal action last..

Jun.30 - Mick Schumacher is yet to secure his seat at Haas for the 2023 season, boss Gunther Steiner admits. Steiner found himself the subject of criticism for his handling of..

Mazepin not interested in switching his focus to Indycar

Jun.24 - Nikita Mazepin insists he is "not interested" in switching his focus from Formula 1 to Indycar. Although sacked by Haas over the Ukraine conflict and resulting western..

Jun.22 - Nikita Mazepin says he thinks the former promoter of the Russian GP has now received a refund from Formula 1. The Russian driver, who was axed by Haas early this year..

Jun.21 - Nikita Mazepin has confirmed that he is proceeding with legal action against Haas. The Russian driver, and his father's company Uralkali that was the American Formula 1..

Mazepin would return to F1 'immediately' if he could

Jun.11 - Nikita Mazepin says he will return to Formula 1 at "the first opportunity". The 23-year-old Russian and his sponsor Uralali were ousted from Haas this year as part of the..