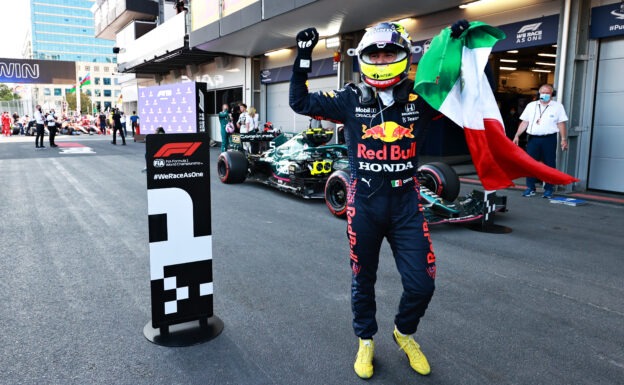 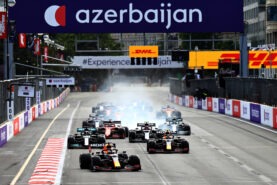 Sergio Perez won his 2nd F1 race at the 2021 Azerbaijan F1 GP today. He started from P6 and won on the Baku City circuit for the first time. It also was his first Red Bull win and his first win of the 2021 season and also his 4th podium in Azerbaijan. The Red Bull Racing team scored their 67th race win and their 5th victory in Baku.

The weather was a lot cooler on racedays than previous 2 days. All cars got away clean at the start. Red Bull driver Sergio Perez had a good first lap and won 2 places to cross the start the second lap as 4th. Lance Stroll was the only one who started on the hard tyres and the Canadian even won 4 positions in the first lap against his rivals who started on the much quicker soft tyres.

At the end of the second lap Mercedes driver Lewis Hamilton on P2 overtook Charles Leclerc in the Ferrari for the lead. In lap 4 Alpine driver Esteban Ocon was the first to retire with an engine problem.

After Hamilton had passed Leclerc, now Max Verstappen was trying to overtake Leclerc for P2. The Red Bull driver used DRS a couple of times but had to wait until lap 6 before he got enough speed to overtake the Ferrari on the main straight. One lap later Verstappen's Red Bull teammate Sergio Perez did the same and got P3 from Leclerc who now was demoted from race leader to P4 in just 8 laps.

Lando Norris made the first regular pitstop in lap 8 to switch to the white hard tyres. Leclerc also pitted quite early and switched to the hard tyres after just 9 laps. One lap later Leclerc's Ferrari teammate Sainz did the same.

Hamilton stopped for new hard tyres at the end of lap 11. His pitstop took 4.6s because the team had to wait for traffic. Verstappen now was leading the race. At the same time Sainz caused the first yellow flag in sector 2, because he out-braked himself at the slowest point at turn 8 on cold tyres.

At the end of the next lap (12) Verstappen pitted for the hard tyres and the Red Bull Racing team pushed out a great stop that took only 1.9s. The Dutchman returned to the track as 3rd leading Hamilton with quite a big margin. Perez pitted one lap later. His pitstop wasn't that quick, but also came back on the track 1.5s in front of Hamilton.

Hamilton now was 4th, because Sebastian Vettel did not do his pitstop yet in the Aston Martin and was even leading the race. It was a long ago we saw his name on top of the leaderboard during a grand prix. His teammate Lance Stroll who started on the hard compound now even was 5th. Vettel pitted at the end of lap 18 and came out of the pits on P7, two seconds in front of Yuki Tsunoda's AlphaTauri. Stroll now even moved up to P4. 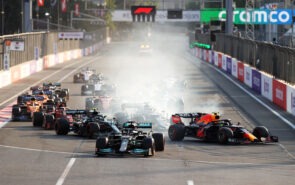 Restart at the 2021 Azerbaijan GP where Hamilton out-brakes himself

Although Hamilton was only 1.5s behind Perez he wasn't able to get into the 1 second DRS zone and overtake the Red Bull on the long main straight for P2. The Mexican driver was able to drive away in sector 2 and keep the seven times world champion out of the 1 second range he needed to use DRS. In lap 24 Hamilton told his team that he was losing ground.

Almost at the end of lap 29 the left-rear tyres on the Aston Martin of Stroll blew up at a speed around 280 km/h. There was nothing the Canadian driver could do to prevent the car smashing into the concrete wall. The car was wrecked and Stroll was able to walk away unharmed. A safety car period was needed to clean up the debris.

After 5 laps behind the safety car the race was restarted at the end of lap 35. Vettel had terrific restart and won 3 places to end up as 3th before lap 47...

In lap 47 race leader Verstappen also got a puncture on the main straight and also crashed into the barrier on maximum speed with only 4 laps to go. The safety car deployed for the second time to recover the Red Bull and the debris on the track which resulted in a red flag. All cars had to return to the pits.

At the restart Hamilton had the best start but out-braked himself and had to return to the track as dead last. A lot of pushing and shoving was going on in the last 2 laps and Perez won the race. Vettel won his first podium for Aston Martin. It was his first 2nd place since Mexico 2019. Gasly had to fight hard with Leclerc and Norris for P3. It was his 3rd F1 career podium. 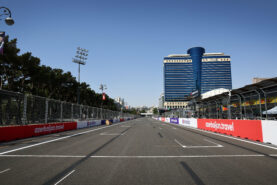 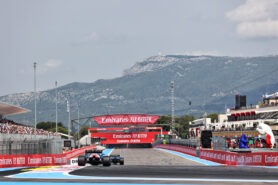