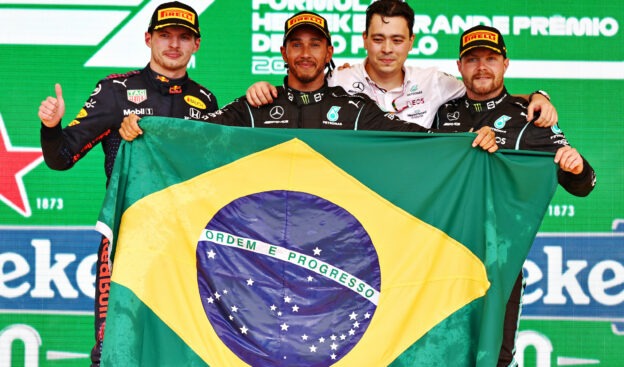 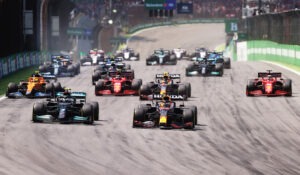 Lewis Hamilton scored his 101st race win today. The British driver won the Brazilian F1 GP for the 2nd time. It was his 6th race win of the 2021 season. The Mercedes driver started from P10 and moved up to P1 in lap 59. It was the 122nd race win for Mercedes.

The start of the race was clean. Max Verstappen passed Mercedes driver Valtteri Bottas the same way he passed him yesterday during the sprint race. His Red Bull teammate Sergio Perez could pass Sergio Perez at turn 4 when the Finnish driver out braked himself. All cars in the top 10 started on the medium tyre.

Lewis Hamilton who started from P10 also had a very strong few first laps and at the beginning of lap 5 Lewis Hamilton was already on P4 when Valtteri Bottas who was driving on P3, was told by his team to swap positions with his Mercedes teammate Hamilton.

A safety car period was used from lap 6 to 9 to clean up the track from debris left by a collision between AlphaTauri driver Yuki Tsunoda and Lance Stroll for P12. The restart with both Red Bulls, Mercedes' and Ferraris behind eachother was delayed until the last moment by Verstappen who could set the pace.

Ferrari driver Charles Leclerc was getting real close behind Bottas to try and pass the Finnish driver, but could not make it stick. The following lap Haas driver Mick Schumacher and  Alfa Romeo driver Kimi Raikkonen collided in turn 1. The German driver broke his front wing when he hit the rear left tyre of the Finnish driver. A virtual safety car was used to again clean up the track. The VSC ended in lap 14.

The next lap Hamilton came very close and even overtook the Mexican driver at turn 1. The next straight towards turn 4 Perez got a DRS from Hamilton and took back P2 from the British driver. At the end of that lap Hamilton again passed Perez for P2 and flew by with almost 27 km/h higher top speed and made it stick.

Race leader Verstappen now was 3.8 sec. in front of his title rival Hamilton.in lap 20. The first regular pitstop was done by Aston Martin driver Lance Stroll to switch from medium to hard tyres. The stop was quite slow and took 4.3s. The Canadian driver returned to the track on P19. Hamilton and Verstappen both drove about the same pace and even already lapped Schumacher in lap 25. 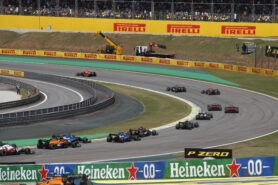 In lap 26 AlphaTauri driver was the second driver to do a pitstop. His stop took 2.9s. Hamilton tried to do an undercut on Verstappen at the end of that lap. His stop took 2.4s. Verstappen. The Dutchman came back on P3 but lost time to Hamilton who still was behind McLaren driver Daniel Ricciardo.on P5. The British driver did get a DRS to close the gap towards and drove fastest lap after fastest lap to close the gap on Verstappen to only 1.4s.

In lap 30 a short virtual safety car was used to clean the track again from debris because Stroll lost his left bargeboard. The Mercedes team was awake and ride away pulled in Bottas for his stop. Because of the VSC Bottas had a very "cheap" pitstop and overtook Perez for P3.

In lap 32 Verstappen now set the fastest lap time. Verstappen was able to be 0.3s faster than his rival in the tight second sector to pull out the gap, he needed to stay clear of the Mercedes that's much faster on the straights.

In lap 44 Hamilton also pitted to not lose too much time on Verstappen also got a new set of hards.Hamilton now was 1.8s behind Verstappen, Bottas was 5.1s behind Hamilton and Perez 3.1s behind Bottas. 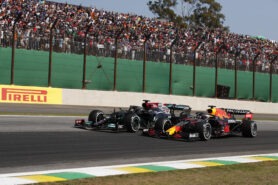 Max Verstappen and Lewis Hamilton going side by side into turn 4 at Interlagos, Brazilian F1 GP (2021)

In lap 47 Hamilton got really close to the Red Bull of Verstappen and only was 0.4s behind. The next lap Hamilton gave it all he got and got along side the Dutchman on the straight towards turn 4. Verstappen who was on the inside braked very late and both drivers went wide in turn 4. The incident was noted by the stewards.

IN lap 58 Hamilton again was looking to get passed the Red Bull at turn 4, but couldn't make the pass. One lap later Hamilton could get closer at turn 1 and got a DRS on the straight toward turn 4 to take the lead.

With 10 laps to go Hamilton was 2.2 sec. in front of Verstappen and Bottas also was getting closer to Verstappen, but was looking at a gap of 9s.

Perez went in at the end of lap 69 to get a new set of softs to steelaway the extra point Hamilton got for driving the fastest lap up till then. 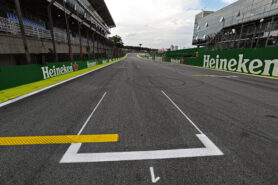 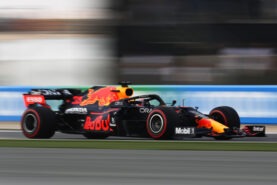