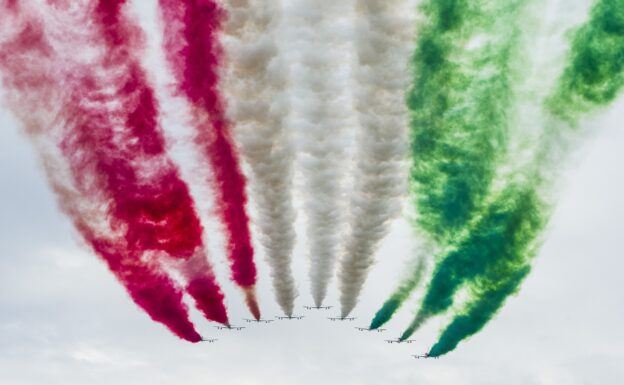 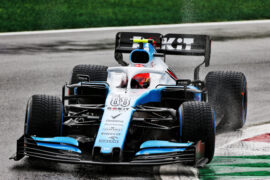 The temple of speed was very wet during the first practice for the 2019 Italian F1 Grand Prix. The drivers went out on the full wets (blue) tyres to try and set up their car on the very slippery circuit.

Half an hour into the session Alfa Romeo driver Kimi Raikkonen spun off with intermediate (green) tyres at Parabolica and caused a red flag period.

Especcialy the Ascari chicane looked to be very slippery. At first Carlos Sainz spun his McLaren coming out of the corner and was able to keep his car out of the barrier. A few minutes later Sergio Perez did the same spin with the Racing Point RP19, but was not so furtunate and crashed backwards into the barrier that turned around his car to also wreck his front wing and suspension. Perez wasn't able to go on and caused a lot of damage.

With 45 minutes to go the cars drove out again as it was still wet. A few mintues later Pierre Gasly caused a red flag after he had spun in turn 1 and was able to go on without any damage.

Overall we saw the drivers had a hard time getting the tyres warm enough to have enough grip under braking. Almost every driver had to use the escape road in turn 1.

With 20 minutes to go the track dried and the lap times went down. At that moment Charles Leclerc was quickest in the Ferrari SF90. He topped the timesheet with a 1:31.290 min.

With 10 minutes to go the Alfa Romeo of Raikkonen was almost ready again to go out after his shunt in Parabolica. Both Ferrari drivers Leclerc and Sebastian Vettel drove out on medium slick tyres. They had 8 minutes left on the clock to check out those tyres on the still damp circuit. The quickest lap time until then was a 1:30.596 by Valtteri Bottas in the Mercedes on intermediate tyres.

Almost all drivers went out on slick tyres and caused the lap times to drop very quickely as the asphalt was getting dry. At the end of this FP1 session Leclerc came out as quickest.

The quickest lap time of last years FP1 was set by Sergio Pérez with 1:34.000 also on a full wet Monza track.

Here you can see the highlight footage:

⚠️ Warning: Monza is difficult in the wet! ⚠️

Warm up for FP2 with the best bits from FP1 🍿#F1 #ItalianGP 🇮🇹 pic.twitter.com/5oEbNhiTEx 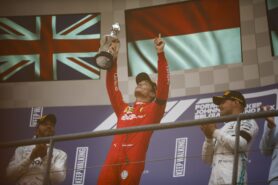 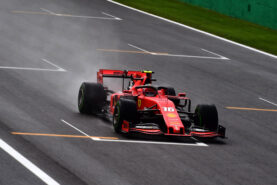