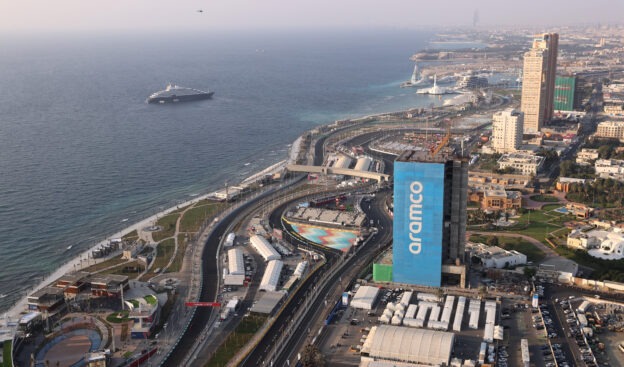 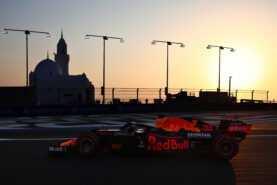 Both Ferrari drivers Carlos Sainz  and Charles Leclerc were the first driver to enter the newest F1 track. It also was the first time Formula 1 cars drove out to start the first practice for the first ever Saudi Arabia Formula 1 grand prix.

F1 title protagonist Max Verstappen was the third driver who entered the track. His first quick lap time 1:33.614 min. Pierre Gasly was second in the AlphaTauri after his first 1:33.765 min. Verstappen improved on his second run and pushed out a 1:31.736, being almost 2 seconds quicker!

Until 10 minutes into the session Hamilton had not set a lap time in the Mercedes. His first lap time was a 1:33.241 min and 7th on the leaderboard. At the same time Verstappen improved again and set the quickest time to 1:30.920 min being 0.8s faster than the other Mercedes driver Valtteri Bottas who was second fastest.

15 minutes into the session Lando Norris showed the McLaren is force to recon with again. Just as they showed on the other high speed track in Monza. The British driver was only 0.5s slower than Verstappen and grabbed P2 from Bottas. 2 minutes later Hamilton went third fastest with a 1:31.478, when Verstappen put in an even faster lap to set the fastest lap to 1:30.354 min being 0.551 sec. quicker again on the hard tyres.

Halfway the session Hamilton was improving a lot and went second quickest, but had to use the soft tyres to get there and still was 0.7s slower than his title rival Verstappen who had recorded a 1:30.014 min on a set of hard tyres. Bottas was 3rd, Norris 4th, Leclerc 5th, Gasly 6th, Vettel 7th, Ocon 8th, Russell 9th and Ricciardo 10th. Nikita Mazepin was last and 5.7 seconds slower than Verstappen. His teammate Perez also was having trouble to get up to speed and was 2.3s slower on P17.

With 20 minutes to go Verstappen also put on a set of soft tyres underneath the RB16B to check out how quick a lap around the Jeddah street circuit was on those tyres. At the same time Bottas went quickest on softs being 0.005s faster than the the Dutchman.

Fifteen minutes before the end Hamilton was the first who went below the 1:30's and went quickest on a set of softs with a 1:29.786 min. Verstappen who went out on a set of softs earlier went back to the pits for some adjustments and went out again with 13 minutes still on the clock. The Red Bull driver wasn't faster on his first run, because he went wide on turn 22. On his final lap Verstappen went fastest in sector 1, but couldn't make it stick in the second and third sector and became second. 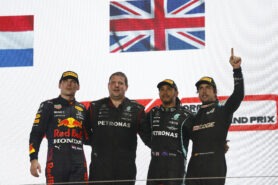 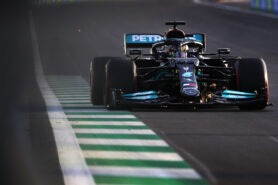