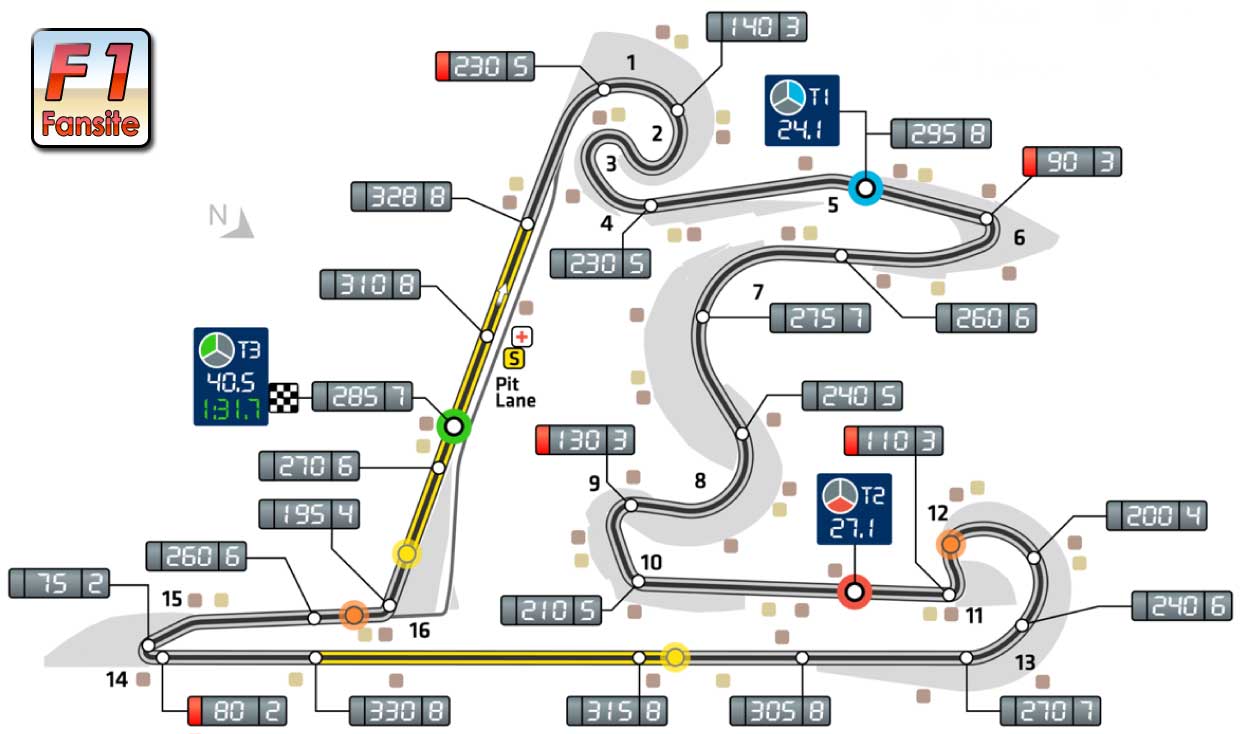 Turns 1 - 4
The slowest complex on the track is the radial turn from T1 through to T4 where the track tightens on itself and the driver progressively loses speed. Engine braking support and drive ability needs to be consistent here to give a stable rear end and avoid excessive wheel-spin, which costs both lap time and increases tyre wear. To reduce locking and improve the wear rate, engineers will map the engine to reduce engine braking when the driver lifts his foot off the pedal. This squares up the rear of the car, stops it from locking and reduces the tyre wear as a result. This phenomenon of reducing engine braking when the driver is off the throttle is called 'overrun'.

Turns 12 and 13
Turns 12 and 13, which form the radial corner that leads onto the long straight, are the mirror image of the first complex. Again, creating car stability will decrease lap time, particularly when the tyres are worn or wearing down. Another means of creating stability is to change the pedal maps, ie. the percentage of torque delivered in relation to the percentage of pedal application. While the throttle application needs to correspond roughly to the torque delivered, small variations can make a real difference in the stability of the car. In this complex a soft pedal map – where the engine delivers relatively less torque at a low pedal position – is likely to be used so the driver initially has more modulation to avoid wheelspin, which wears the tyres unnecessarily.

Back Straight
The straight between turns 13 and 14 is a touch over 1,300km and the engines will sit at full throttle for between 17 and 18 seconds – longer than it takes for a small airplane to take off! Given this period of time, which equates to about 20% of the lap time, it is essential to calibrate the engine and gear ratios to maximise acceleration without compromising maximum speed. Short ratios favour acceleration, which means getting up to speed in a shorter distance over the first part of the straight, while a longer top gear ratio permits higher maximum speed, which is important on the second part of the straight.

Get tickets cheaper at F1-Fansite.com. Available 2020 tickets & early booking discounts are:
✅ Check out & order your F1 Tickets in our online shop »