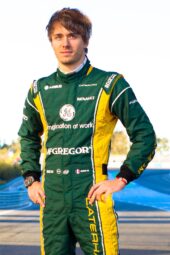 Many believe it is rare to find a sponsored driver who actually has the talent and skills to warrant a race seat in F1. But in Charles Pic the sport may actually have one. It is difficult to assess a driver’s performance when his car is the slowest on the grid, but last season the 23 year-old pushed his vastly more experienced and well respected team mate Timo Glock very close in the Marussia.

Now he has made the sideways move to Marussia’s big rivals Caterham on a ‘multi-year contract’. Unfortunately it may be that the Frenchman is circulating at the back of the grid again, fighting with Marussia in one of the two slowest cars. However he can take inspiration from both Fernando Alonso and Mark Webber who started their careers at the back in Minardi’s.

Pic joined Marussia for the start of the 2012 season, after a strong GP2 campaign, with experts expecting he would go the same way as his predecessors Luca di Grassi and Jerome d’Ambrosio, and find himself on the scrap heap for the next season. However a positive season and a superb finale in Brazil, which saw finish 12th, sparked Caterham to sign him a long term deal immediately. Pic’s sponsorship with a French company, that has close ties to Renault, show that he may be around for some time but, like Sergio Pérez, he has the talent go far.