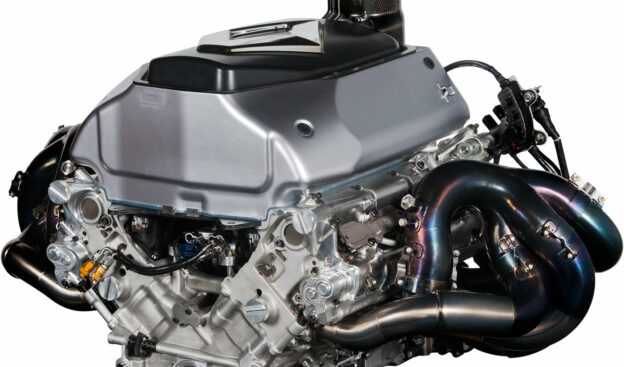 This year, the final year of the RS27, we explain each of the key systems of the V8 engine in detail. This week we give you the fuel system, a key car system at the boundary between the chassis and the engine teams – the chassis team designing and operating the fuel cell and lift pumps and collector, and the engine team taking responsibility for the main fuel pump, filters and injectors.

What is the function of an engine’s fuel system ?

The task of the engine’s fuel system is to recover the fuel from the fuel tank and deliver it to the engine where it is sprayed into the trumpets to mix with air on the way into the cylinder, where the fuel-air mix is ignited to generate torque. The fuel must be delivered to the injectors at the correct pressure so the quantity injected can be accurately metered, so the fuel system is designed to recover fuel from the tank and increase and regulate this pressure by means of a sophisticated mechanical pump.

The fuel system starts with the fuel cell (tank), which is located within the monocoque behind the driver, but in front of the engine. It is a large leak proof flexible bladder made of military grade ballistics material to contain all the fuel necessary for the car during a race (approximately 160 kg or 230 L). The hoses feeding fuel to the engine are equipped with dry-break frangible couplings so if the engine and chassis become separated in an accident, fuel cannot leak from the broken hose, which would create an obvious fire risk as per the fiery accidents of the 1970s.

The fuel inside the bladder is subject to lateral and longitudinal g-forces due to cornering, acceleration and braking. The fuel therefore sloshes around the tank, moving from side to side and back and forth. As a result it can be tricky to recover the fuel as it moves around in the tank, particularly at low level – imagine drinking with a straw from water bumping around on a tray compared with drinking the same water with a straw in a bottle!

The tank therefore contains a number of low-pressure electrically powered “lift pumps”, typically 3 or 4 of them, positioned to suck up fuel from the tank corners. Filters at the entry to these pumps protect them from damage that may be caused by impurities that may have entered the fuel cell. The lift pumps deliver to a smaller vessel within the fuel cell known as a “collector”, which typically has a capacity of 2.5 kg or 3 L.

The collector is pressurized by the lift pumps, and it contains enough fuel to feed the main pump continuously even if supply from lift pumps becomes intermittent at low fuel levels, particularly bearing in mind that an engine running at full revs will need up to 3.5 L/min of fuel. It looks like an upside down soda bottle – that is, tall and slim, to ensure the fuel supply is constant.

The next stage is for the collector to deliver fuel to a mechanically driven fuel pump that in turn delivers fuel to the injectors. In fact, the role of the main pump could be compared to a domestic jet washer operated by a push button – it takes tap water at low pressure and delivers it at much higher pressure to the spray lance when required, but when the button is not pushed nothing is delivered.

The pump is entirely mechanical and must be protected by a fine filter at the entry. This pump delivers fuel flow fundamentally proportional to engine RPM. The fuel consumed by the engine is also approximately proportional to RPM at full throttle, but at closed throttle, the engine uses no fuel. To match the fuel supplied to the fuel required, the main pump has a variable displacement mechanism actuated by a sophisticated pressure regulating device.

After passing through the pump and a final filter in the fuel rail, the fuel is delivered to the injectors at high pressure (95 bar). Technical regulations forbid a pressure higher than 100 bar.

The injectors are – in technical parlance – precision electro-mechanical solenoid valves controlled by the SECU (Standard Electronic Control Unit). The SECU hardware and control software is common to all F1 engines, but the calibrations are free within range permitted by FIA. Fuel is delivered when the solenoid is energized, delivering it at high pressure into the intake air at precisely the right instant in the engine cycle to achieve optimum cylinder filling and mixture preparation, ultimately promoting efficient combustion and therefore engine performance.

How has the fuel system changed over the V8 era?

Other than routine changes due to year on year car development, the overall layout of the system has changed little other than the change to the size of the fuel cell to accommodate the refuelling ban since in 2010. Previously, the fuel cell could be smaller; containing the fuel needed between pit stops (say 70kg) but now it must be large enough to hold up the fuel for the whole race.

The larger cell highlights the problems of recovering the last fuel in the tank:

There have been developments to overcome these challenges, including changes in car design to reduce heat transfer to the fuel, additional constraints on fuel formulation, and fuel cell and lift pump design improvements.

What would we now be seeing if there had not been an engine freeze?

Actually in this case, development has been more limited by technical regulation than by the engine freeze. Injection pressure is limited to a maximum of 100 bar, (or 100 times normal air pressure at sea level) and a single injector per cylinder must be positioned in the inlet tract.

These regulations have outlawed the use of ultra-high pressure injection systems, and also the use of direct injection into the combustion chamber.

With greater technical freedom, it is probable that more complex injection systems would have been developed, perhaps multiple injectors per cylinder, with delivery pressures towards 500bar (the pressure of being 5km under the sea or equivalent to the weight of an elephant balanced on a postage stamp, or the equivalent of one person trying to support 50 jumbo jets!)

The performance payback for this work would have been improved power, drivability and fuel consumption.

Any interesting stats and facts?

At 18,000rpm – before the limiter kicks in – the fuel injector is fired once every 6.6ms for a duration of 2.7ms at full throttle. The fuel delivered by each injection event is 0.049cc, approximately the same volume of venom in a snakebite. However the fuel used by the engine at full throttle in the same conditions is between 3.5L/min and 4L/min depending on ambient conditions, about half as much as a normal power shower dispenses during your daily shower! 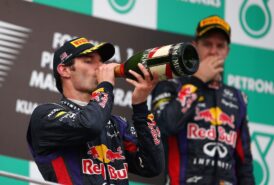 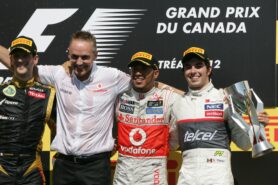