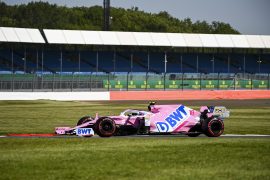 Daniel Ricciardo was the first to put a lap time on the leaderboard this second free practice for the British Grand Prix. His first lap in the Renault RS20 was a 1:30.518 min.

Sebastian Vettel did manage to go out this FP2, but returned to the pits after 8 laps, because something came loose in the cockpit

We saw a lot of frustrated drivers again this session. A lot of drivers complained about being held up by other drivers.

Half way the session was red flagged after Alex Albon lost control of the RB15 in Stowe. He rear step out in the middle of the corner with a speed around 250 km/h, The Thai driver did try to correct the oversteering Red Bull, but wasn't fast enough. He ended up hitting the barrier and destroyed the complete left side of the car, including the rear and front wing. Up till this moment Lance Stroll already had driven the quickest lap time in the 'pink Mercedes' with a 1:27.274.

At the end of the session rookie Nicholas Latifi also spun off at Stove in a similar way as Albon did. The Canadian driver did a better job in keeping his Williams in one piece and could drive back to the pits.

The fastest FP2 lap of last year was a 1:26.732 min, clocked with the Mercedes W10 on soft tyres and Valtteri Bottas behind the wheel.

See the crash of Alex Albon in below footage:

An up-and-down afternoon for @alex_albon

He ended P2 in second practice ⏱

But first came this big collision with the barriers at Stowe 💥#BritishGP 🇬🇧 #F1 pic.twitter.com/hV9c0d6I0V 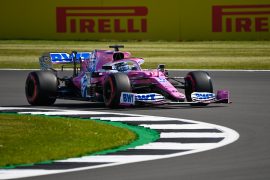 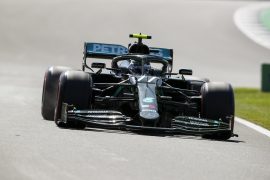