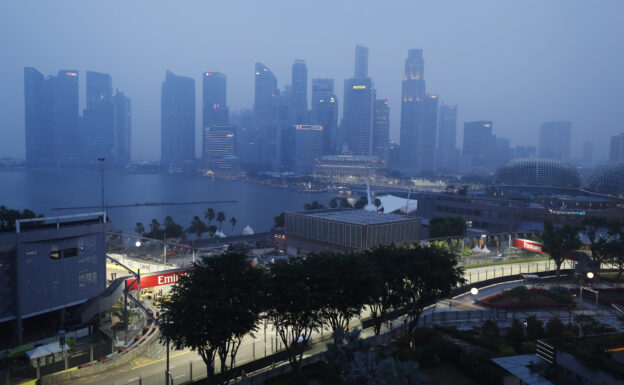 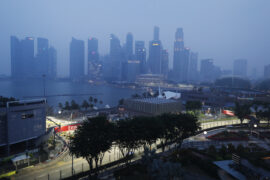 A scenic view of the Singapore skyline on an overcast day during the Singapore GP at Singapore Street Circuit on September 18, 2019 (Photo by Steven Tee / LAT Images)

First practice for the 2019 Singapore Formula 1 Grand Prix got underway on time and still in daylight. As the lights at the end of the pit lane flick to green we saw Pierre Gasly going out as first in the Toro Rosso.

1:44.723 min was the time set by Charles Leclerc in the Ferrari. He was the fastest after 10 minutes into FP1.

Alfa Romeo was using the green flowfish paint to check the aerodynamics of the C38.

Ten minutes after Leclerc's lap it was Red Bull driver Max Verstappen who was quickest with a 1:41.938. A lot is expected by Verstappen in Singapore. Marina Bay Street Circuit has the most corners of the calendar. Cars with a lot of downforce have a big advantage.

Mercedes driver Lewis Hamilton also mingled his W10 into the top of the timesheet. Halfway the session the British driver topped the timesheet with a 1:41.469.

Racing Point had brought a lot of upgrades to Singapore. Lance Stroll seemed to benefit a lot from it and even was 3rd for a few minutes early in the session.

With 32 minutes still on the clock Leclerc was rolling into the pit. The Ferrari SF90 failed to change gears and had to be pushed back to the garage by mechanics.

A few minutes later Valtteri Bottas had a harsh moment in the Mercedes. He was struggling to get the hard tyres in the right temperature window and crashed into the barrier coming out of turn 19. The session was red flagged for a couple of minutes to recover the damaged W10 and clear up the track. When the green flag was waved the drivers had 15 minutes to go in this FP1 session.

Daniel Ricciardo was quickest in last years FP1 around the Marina Bay with a 1:39.711 min. 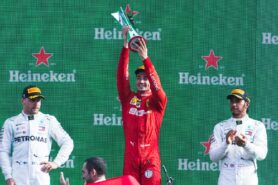 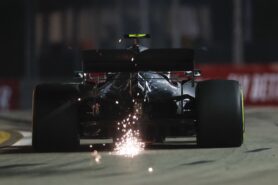