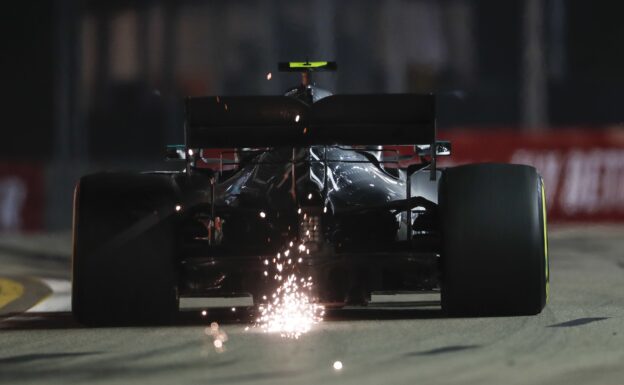 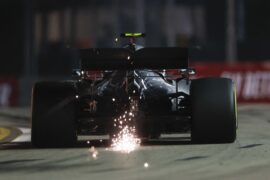 The second free practice for the 2019 Singapore Grand Prix started off as the sun had set. The track was under the glare of the flood lights. The drivers and teams were in no rush to go out. It took 2 minutes before the first car came out of the pits.

It was Kimi Raikkonen who was first running the medium compound tyre and Antonio Giovinazzi on the hard tyre. Both ran plenty of flowvis paint runs in FP1.

After 15 minutes it was Lewis Hamilton who was on top of the timesheet, despite running the medium tyre. He had set a 1:40.685 min, four tenths slower than Max Verstappen was in FP1.

Alexander Albon crashed at turn 10, 20 minutes into the session and hit the barrier with the frontwing of the RB15, that was left behind when he drove back to the pits for a new undamaged version.

Sergio Perez in the Racing Point and Kevin Magnussen in the Haas had an exciting moment when Perez squeezed Magnussen into the barrier before he started his lap. The incident was investigated by the stewards and Perez had to go to the stewards after the session to explain his behavior.

After Two-third of the session we saw a fight at the top between Hamilton, Verstappen and Vettel all on soft tyres. The British Mercedes driver was on top with a 1:38.773 min followed by Verstappen on 0.184s and Sebastian Vettel as 3rd with a gap to the leader of 0.818s in the Ferrari.

In the last half an hour of this FP2 drivers did their race simulation runs to collect enough data for Sunday's race prediction. At the end of the day the Mercedes with Hamilton looks to be the quickest overall, not only on 1 lap, but also in race trim.

Alexander Albon, Valtteri Bottas and Charles Leclerc seem to not get the best out of their cars yet.

Best of the rest is Carlos Sainz in the McLaren. He was only 1 tent slower than Leclerc. George Russel in the Williams also shows what he's made and has closed the huge gap towards the midfield and was only 0,213 sec slower than 2007 World Champion Kimi Raikkonen in the Alfa Romeo.

Last years quickest FP2 lap time was set on 1:38.699 driven by Raikkonen in the Ferrari. 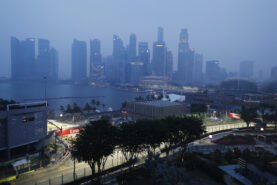 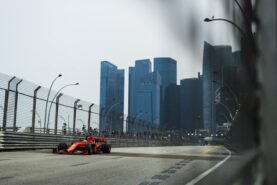