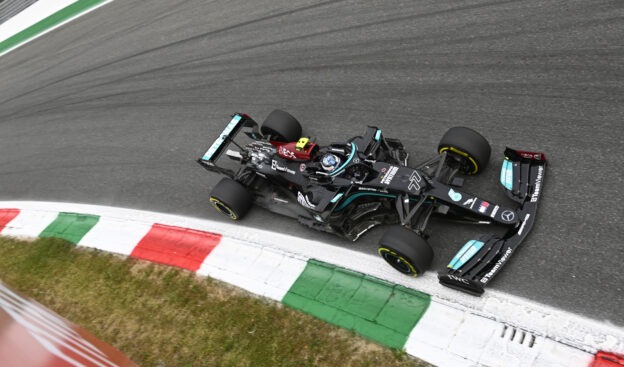 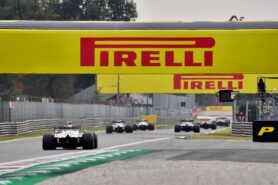 Valtteri Bottas will start from P1 for tomorrow's second sprint qualifying session to be driven at Monza.

Q1
The qualifying for the sprint race tomorrow in Italy didn't start off right away. The teams waited a few minutes before they got out on the track in this first qualifying session. Charles Leclerc was the first who went out in the Ferrari. The Italian GP is of course the teams home race.

It's the first time that the qualifying session has been run this lat in the day. With 10 minutes to go Mercedes driver Lewis Hamilton was on top of the timesheet with a 1:20.543 min. The drivers did have a lot of traffic on their quick laps. They all tried to charge up their hybrid system as much as possible by driving slow and get a clean lap.

With 5 minutes to go the drivers who had to improve to get out of the drop zone were: George Russell (Williams), Charles Leclerc (Ferrari), Mick Schumacher (Haas), Nikita Mazepin (Haas) and Robert Kubica (Alfa Romeo).

Max Verstappen saved out a set of Soft tyres with the Red Bull car during this session and managed to get op to P3. Home GP driver Antonio Giovinazzi seems to be working hard to stay at Alfa Romeo by being 8th fastest this session.

In the end only Leclerc improved enough to get into Q2. Nicholas Latifi was pushed out by his performance. At first Russell also seemed to have been pushed out, but because AlphaTauri driver Yuki Tsunoda ran wide in turn 11, his lap got deleted and ended up as 17th, which gave Russell P15 to get through Q2.

Q2
The second session the traffic was a bit better because we now have 15 instead of 20 cars. Russell was the driver who was using the helmet cam this time. After the first run Lewis Hamilton was on P1 and the first to go under the 1:20's, with a 1:19.936. His teammate Bottas was second on 0.1s and Norris was third.

Five minutes before the end the drivers who had to improve to get into Q3 were: Esteban Ocon (Alpine), Sebastian Vettel (Aston Martin), Carlos Sainz (Ferrari), George Russell (Williams) and Fernando Alonso (Alpine).

Verstappen was only 6th, 0,7s slower than Hamilton, until the last lap. Sainz was the only one who improved to get into Q3.

Q3
Both Mercedes drivers went out as first to set the pace in the final part of qualifying. After the first stint Hamilton was fastest with a 1:19.949 min. Verstappen was on P2 with the smallest of margins of only 0.017s. On P3 was Norris on only 0.065s. Ricciardo was 4th on 0.3s and Bottas on P5 on 0.4s. Sergio Perez was only on P9 with quite a big gap towards his teammate of 0.9s. Giovinazzi didn't set a time on the first part stint in the Alfa Romeo.

The last stint of this qualifying session was kicked off by both Red Bulls with Perez leading Verstappen to try and give Verstappen a tow to get pole position. The Dutch driver didn't improve his time. Bottas did and turned out to be fastest. 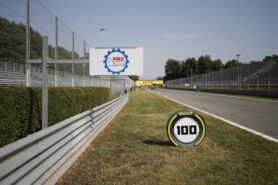 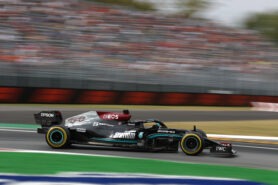