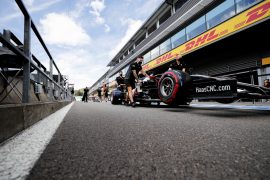 Haas Mechanics push the Haas VF-20 in the pit lane

Carlos Sainz was the first to check out one of the favourite tracks for most drivers in the McLaren this first practice session for the 2020 Belgian GP. Alex Albon was the second driver to exit the pits to test out several front wings with aeroracks fitted on the RB16.

After half an hour into this first practice session Max Verstappen topped the timesheet with a time of 1:45.470 min clocked with the Red Bull RB16 fitted with the Hard compound tyres.

The Ferrari powered Haas VF-20 driven by Romain Grosjean and Kevin Magnussen and the Alfa Romeo C39 of Antonio Giovinazzi all had a power unit problem and had to be fixed. None of them were able to clock a lap time.

With half an hour to go both Mercedes drivers and Max Verstappen tried out the Soft tyres, to see how quick they were on those tyres. Hamilton and Verstappen both had a bit of wheel spin coming out of turn 1. Bottas drove the cleanest lap and took P1 for this session. 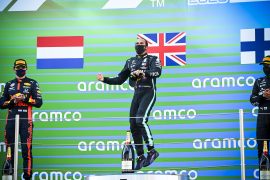 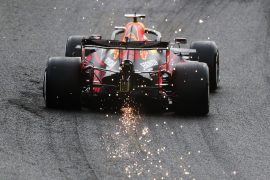