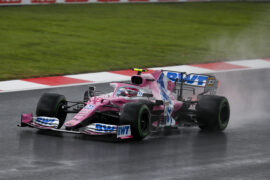 Lance Stroll scored his very first F1 pole position of his career, during the 2020 Turkish Grand Prix qualifying session today. The Racing Point driver will start from P1 for the first time in his career in Turkey. It was also the first pole for the Racing Point team.

Q1
The quali started out dry, but the track was still very wet and slippery. This year the track was extra slippery because 10 days ago it was resurfaced with new tarmac.
A few drivers tried to clock quick lap times on the intermediate tyres, but came back for full wets.

Seven minutes before the end of the session it was red flagged, because the track became undrivable. At that point Charles Leclerc, Romain Grosjean, Pierre Gasly, George Russell and Nicholas Latifi were to slow to get into Q2.

The session was restarted after 50 minutes. At this point Renault driver Esteban Ocon was on P1. All drivers went out to try and improve their ranking. With 3:30 min the session again was stopped when Romain Grosjean beached the Haas when he outbraked himself in turn 1.

When Q1 restarted for the second time Max Verstappen took over P1 from Ocon and was even almost 2s faster than his teammate Alex Albon. Unfortunately Williams driver Latfi lost control of his car and could not return to the track.

Q2
This session was dominated by Verstappen who improved his lap times very quickly by 2s a lap. With 5 minutes to go Sebastian Vettel, Leclerc, Lando Norris, Gasly and Carlos Sainz had to improve to get into Q3.

In the final laps of Q2 all drivers pushed to get in to try and get into the top 10 and battle for pole. Nobody who was in the elimination zone could improve enough and the Ferrari team didn't make it to Q3.

Q3
In the final session the track was getting dryer and only Sergio Perez and Ocon went out on quicker intermediate tyres. After Perez set the quickest lap towards 1:52.037 min more drivers switched to intermediates to try and score pole position.

In the very last lap it was Canadian driver Lance Stroll who scored pole for the first time. The last pole scored by a Canadian driver was scored by Jacques Villeneuve back in 1997 for the European Grand Prix at Jerez. 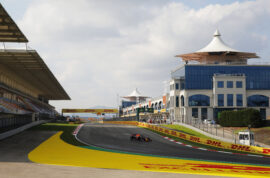 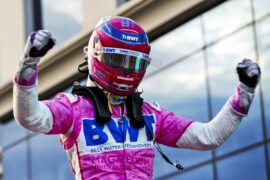