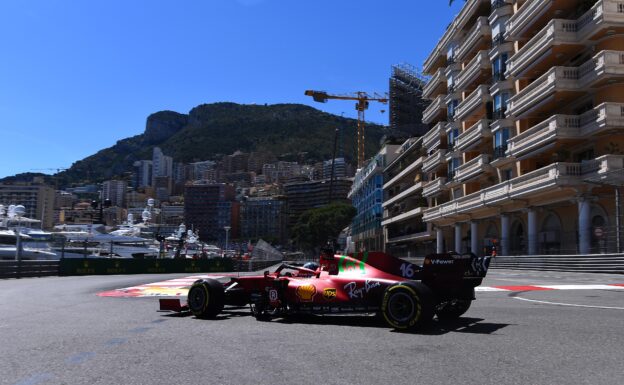 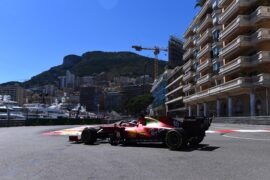 Charles Leclerc scored his 4th F1 pole position of his career, during the 2021 Monaco Grand Prix qualifying session today. The Ferrari driver will start from P1 for the first time in Monte Carlo. It was the 229th pole for the Ferrari F1 team.

The qualifying session for the 2021 Monaco Formula 1 Grand Prix started of on time. The weather is a bit colder than normal. This years rookie Mick Schumacher was not able to take part during qualifying after crashing the Haas at the end of final practice this morning.

Q1
Monaco is the circuit were the driver has the most influence on the lap times. They have to be 100% focused. One error can cause a crash or puncture which means the end of the session.

The track was getting quicker after each lap and we saw a lot of drivers topping the leaderboard. With 5 minutes to go the following drivers had to improve to get into Q2: Nikita Mazepin (Haas), Nicholas Latifi (Williams), Esteban Ocon (Alpine) and Fernando Alonso (Alpine).

At the end only Ocon made it thru to Q2. Alonso will be very disappointed to start from P17. Brazil 2018 was the last time Alonso wasn't able to get into Q2. The leaderboard is very tight with the top 14 in just over 1 second.

Q2
Pierre Gasly was leading the cars that got out right away to set a time for Q2. No teams dared to fit the medium tyres to try and get a strategic advantage for the first part of the race.

During the first stint Carlos Sainz was quickest at first in the Ferrari with a 1:10.806. The Spanish driver had quite a comfortable gap towards Lando Norris on P2 in the McLaren of 0.2s. That was before Verstappen had finished his run. The man who got the race lap record on his name pulled out a great lap to go to P1 with a 1:10.650 min.

The drivers who had to improve in the second stint to get out of the drop zone for Q3 were: George Russell (Williams), Kimi Raikkonen (Alfa Romeo), Esteban Ocon (Alpine), Lance Stroll (Aston Martin) and Antonio Giovinazzi (Alfa Romeo).

After the finish of Q2 only Giovinazzi improved enough to get into Q3. He pushed out Daniel Ricciardo with McLaren, who sounded very disappointed on the radio to see he was again slower than his teammate Norris. It was the first time this season we see an Alfa Romeo making it into Q3.

Q3
The most important shootout for pole position looked to go between Verstappen and Leclerc this season. Pole king Hamilton wasn't seen in the top 3 whole session.

After the first stint the man to beat was was home racer Charles Leclerc. He was pushed out a 1:10.346 from the Ferrari. Verstappen was looking at a gap of 0.230s to get pole for the race tomorrow. Bottas was behind them on P3 very close to Verstappen on +0.255s towards Leclerc.

Bottas and Verstappen were pushing to get pole for the race and both had purple sectors when Leclerc crashed into the wall of turn 15 just like Latifi did during practice this morning. It's the first pole position for Ferrari since the 2019 Mexican GP. 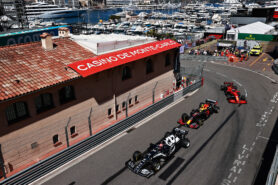 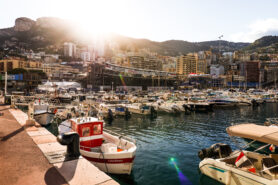