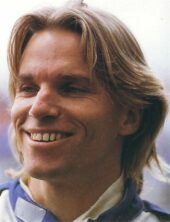 Stefan Johansson 2020 Beyond the Grid Podcast

This week we welcome blonde-haired 80s Super Swede Stefan Johansson onto the show. Stefan was a 12-time podium finisher, and he would have been a race winner too were it not for..

Dec.8 - Nico Rosberg has hit back at claims he might return to formula one after a few years of retirement. Citing the stress of his battle with Lewis Hamilton, and the desire to..