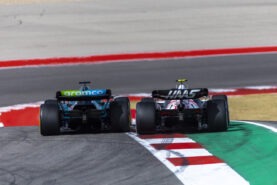 If a driver has a total of 12 penalty points on his F1 super licence, the driver will be suspended for the following GP. following which 12 points will be removed from the licence.

Below you can find the F1 Super Licence penalty overview of current F1 drivers. Lewis Hamilton and Carlos Sainz are the only two drivers without penalty points on their F1 licence.

Last update was done on November 20, 2022 after the Grand Prix in Abu Dhabi.