The tension at Mercedes has finally overflowed after Nico Rosberg held off Lewis Hamilton to win the Monaco grand prix and retake the championship lead. After a suspicious move in qualifying, where Rosberg’s error ruined Hamilton’s lap, the relationship between the pair is said to be frosty at best. In the post-race celebrations they refused to even look at each other, a clear signal to the F1 world that the team-mates are now bitter rivals. With the championship almost certain to be won by a Mercedes driver, this season could become a classic.

During the race Hamilton huffed and puffed but couldn’t quite get within striking distance throughout the 78 laps around Monte-Carlo. Rosberg controlled the race superbly, keeping the Brit at arm’s length before surging away in the final stretch. Hamilton was, in the end, fortunate to finish second after he came under a late attack from Daniel Ricciardo. He complained of problems with his vision, while the Red Bull behind managed to preserve his tyres better than the cars ahead. It was a second consecutive podium finish for Ricciardo.

The sport will now be immersed in gossip surrounding that incident in qualifying yesterday. Whether Rosberg deliberately made an error only he will know, but it is clear Hamilton feels aggrieved. His spikey demeanour in the press paints an unimpressed man who will be desperate for revenge at the more exciting Canadian circuit in two weeks. The sport has been waiting for this battle to become intense as the Mercedes dominance has so far threatened a mundane season.

One driver who will be eager to get involved in the fight is Sebastian Vettel. The German retired with car problems again but he will be encouraged by Ricciardo’s performance late on. However, another team-mate battle is brewing as the ultra-competitive four time champion will not appreciate the young Australian having the upper hand. For now, they remain friends but, like Hamilton and Rosberg, it is only a matter of time before it explodes.

The inter-team battles made for a fascinating sub-plot to a cracking grands prix. The highlight was that lowly Marussia secured their first ever points as Jules Bianchi finished 8th. He took full advantage of crashes and poor reliability elsewhere. He will be demoted to 9th after a five second penalty but the value of a points finish means they won’t be too concerned.

At the start, Rosberg drove away while Kimi Raikkonen leaped from 6th to 3rd. A safety car appeared immediately, after Sergio Pérez ended up in the wall after colliding with Jenson Button. Vettel retired shortly after. The race was drifting before Adrian Sutil had a heavy accident at the chicane. This was right in the pit-stop window and through everyone into chaos as a second safety car came out. Hamilton was angry with his team for not bringing him in the lap before as he anticipated the safety car after seeing Sutil’s crash. Meanwhile, Raikkonen’s race was ruined after a puncture dropped him to the back of the field.

The 29-year-olds best chance to get past Rosberg came after the pit stop as the German was forced into fuel saving mode. However, some clever driving by the leader kept Lewis behind. Rosberg has now led every lap of Monaco for the last two years. Further back, Fernando Alonso drove a largely anonymous race to take 4th ahead of Nico Hulkenberg, Jenson Button, Felipe Massa and Romain Grosjean. Kevin Magnussen, after colliding with Raikkonen, came 10th.

In two weeks Montreal plays host the next chapter of the Mercedes battle, which is being compared to Senna and Prost in the late 80’s. If it does manage to live up that standard then we are in for a thrilling season. Hamilton may feel upset but Rosberg’s victory is important for the championship. He has halted four successive Lewis wins and regains the lead. Whether he can extend it, or whether Lewis can regain it, in Canada no-one knows. But it will be exciting to watch.

Star Wars on next level for Mercedes duo 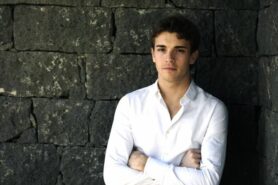