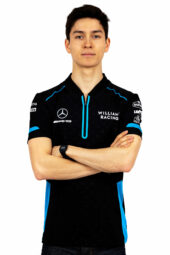 Jack Aitken is a British driver who started the 2020 Formula 1 season as a reserve drive for Williams.

Aitken started competing in karts at 7 years of age. His first experience with cars came in the Intersteps Championship in 2012.

Aitken won the 2015 Eurocup Renault 2.0 in his third year in the category. In that same year, he won the Formula Renault 2.0 Alps and the Pro Mazda Winterfest. He made his GP3 debut in 2016 and won one race in that season. He finished fifth in his first GP3 season.

Aitken won three races in the 2019 F2 season but finished fifth in the championship while driving for Campos Racing.

In 22 races in F2 during the 2020 campaign, Aitken has not won. He has been involved with F1 teams since 2016, as he was a member of the Renault young driver program.

With Renault, he had his first chance to drive a Lotus F1 car. Then, he was named a reserve driver for Renault, and in 2020, he landed that same role with Williams. His free-practice debut occurred at Austria in the 2020 Styrian Grand Prix.

In the 2020 Sakhir Grand Prix, Aitken will make his official F1 debut for Williams. The opportunity came up after George Russell replaced seven-time World Champion Lewis Hamilton at Mercedes (due to Hamilton's positive Covid-19 test). As Williams had to give up Russell, Aitken took his seat for the weekend.

It's always a special moment when a driver gets to make their Formula One debut. Join Jack Aitken as he makes his at the 2020 Sakhir Grand Prix in Bahrain for Williams

Dec.2 - Williams Racing can confirm that Jack Aitken will race in this weekend’s Sakhir Grand Prix alongside Nicholas Latifi. The 25-year-old takes the place of the team’s..

Dec.2 - Two candidates had emerged at the front of the queue for Lewis Hamilton's plum Mercedes cockpit this weekend in Bahrain. Seven time world champion Hamilton has just..

Sebastian Vettel's impending departure from Ferrari has created a slot at Renault that could be filled by Fernando Alonso. The Spaniard is keen to return to F1 in 2022, when new..