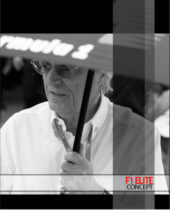 No driver, or team owner or personality has been as influential in the history of Formula One as Bernard Charles Ecclestone. The CEO of Formula One Management has almost single handily lifted the sport from a rich man’s hobby, to a professional and lucrative worldwide business. He may split people’s opinion, and rumours of controversy have followed his every move, but one can’t deny the affect he has had on one of sport’s biggest brands.

The fact that Ecclestone’s back ground is so modest makes his story all the more remarkable. His strict business management and disciplined vision for the sport have all helped make him the most instrumental figurehead of any sport.

Born in 1930 in Suffolk, Ecclestone left school at 16 shortly after the Second World War finished, in order to pursue his great interest in Motorcycling. After a fairly successful amateur career in the 500CC Formula 3 series, Ecclestone turned his attention to his business dealings. And what an inspiring move that proved to be.

After disappearing into real estate he returned to Motor Sport in the form of Formula One, and became F1 driver Stuart Evans-Lewis’s manager. He even unsuccessfully attempted to qualify for the 1958 Monaco Grands Prix himself although he plays this down today. However, Bernie’s return to Motor Sport was short lived following the death of Evans-Lewis six days after his awful crash in Morocco. Ecclestone couldn’t face the sport after that tragic incident and disappeared from racing for a further 12 years.

His activities during this time are largely under the radar, although numerous links to the Great Train Robbery in 1963, are largely denied. Ecclestone quipped in 2005 that there wasn’t enough money on that train for him to be interested in. And rumours of him being one of the master minds behind Britain’s most famous crime is slightly far-fetched, however intriguing the myth maybe.

Ecclestone’s break though back into the sport came in 1970, as manager to Austrian legend Joachim Rindt. In his time away from the sport, Bernie had made himself rich but tragedy had befallen him again when Rindt died in Italy following a crash in Colin Chapman’s Lotus. Rindt’s stellar 1970 season prior to his death saw him become the first and only posthumous world champion.

In 1972 Ecclestone purchased the Brabham team for £100,000 and won two world championships in 1981 and 1983 with star Brazilian driver Nelson Piquet. Bernie’s astute business dealings were evident from an early stage in his F1 career after he sold Brabham for $5 million at the end of the decade. However, in the late 80’s he had different priorities.

During his time at Brabham, Ecclestone began to flex his muscle and made some highly useful contacts. In 1974 he formed, along with other powerful figures such as Colin Chapman, Frank Williams and Max Mosley, the Formula One Constructors Association (FOCA). In 1978 he became Chief Executive, with Mosley as his legal advisor, cementing the bond of a strong and powerful relationship that would have instrumental affects for decades to come.

Together Ecclestone and Mosley secured a great coup and negotiated the rights for FOCA to negotiate television contracts for the F1 World Championship, wrestling that privilege away from the FIA. The pair recognised the great global appeal the sport could have following the ground breaking championship fight between James Hunt and Nikki Lauder in 1976. Subsequently they charged broadcasters, who were eager to show the hottest sport around, eye watering sums of money, and kept some for themselves. 23% of the income was kept for FOCA with Ecclestone at the helm, making him very rich. He sold F1 races as a whole season package and not on a race-by-race policy guaranteeing a regular income.

As the sport grew in global popularity, teams started to realise their profit. Sponsors and advertisers, who have long been associated with the sport, were now being carried across on TV with their slogans and colours there for all to see. Teams could charge advertisers more for the pleasure and the money rolled in. Ecclestone had never been more popular.

His role and power were further enhanced when his long term advisor Max Mosley became president of the FIA in 1993. Two years later a deal was signed between the two men that gave Ecclestone the commercial rights to the sport on a 15 year lease. In 2000 that was extended for another 110 years.

The two deals have made F1’s chief a multi-billionaire, but it may also be his downfall. The European Commission investigated the sport following the two deals and concluded that it was a conflict of interest for Ecclestone to hold so much power. In recent years claims of corruption have been unfounded but now Ecclestone faces three serious court cases which could finally weaken his strangle hold over the sport.

German banker Gerhard Gribkowsky claims that Ecclestone paid him a £28 million bribe to under-value the shares of F1 in 2006, before his 47% stake in the sport was sold to CVC Capital Partners. Ecclestone allegedly wanted them to buy his share as they would keep him in power. Ecclestone’s defence is that he paid the money so that Gribkowsky wouldn’t give false evidence about tax evasion measures taken by Ecclestone. If he survives this court case, then there is the case of American company Bluewaters suing him as they believe they were the highest bidders for the sale.

Ecclestone denies all charges but faces a serious fight to maintain his power. However, if it is not now that he relinquishes his role then that day is soon. Ecclestone, like no man, cannot go on forever and the future of the sport without the supremo is very hazy. Who will take over? What effect will they have?

It is arguably the biggest question facing F1 at the moment and is only relevant because of the extraordinary work achieved by Ecclestone over the past 40 years. It seems hard to imagine anyone equalling his influence which proves just remarkable his job has been. F1, quite simply, wouldn’t be where it is without him.

In 2017 Bernie Ecclestone sold his shares of the CVC to Liberty Media and stopped attending races.

Feb.22 - Bernie Ecclestone is worried Formula 1 could make a grave mistake with the new 'sprint race' format. Friday qualifying and a Saturday sprint race will be trialled at..

Jan.19 - Bernie Ecclestone says his friend Sebastian Vettel needs to "answer" his critics in 2021. Vettel, a quadruple world champion from his Red Bull days, has been ousted by..

Ecclestone says Hamilton new contract drama is all for show

Jan.18 - The drama surrounding Lewis Hamilton's 2021 contract is "all just for show". That is the view of former F1 supremo Bernie Ecclestone, who questions the reasons behind..

Berger thinks that next F1 engine can have 2000hp

Jan.14 - F1 legend Gerhard Berger has raised the tantalising prospect of 2000 horsepower engines in Formula 1. While a continuation of 'green' engines is a certainty beyond 2025,..

Dec.21 - Bernie Ecclestone does not agree with the way Lewis Hamilton handled his political activism in 2020. The former F1 supremo has already clashed with new seven time world..

Ecclestone says problem at Ferrari is the Italians

Dec.13 - Bernie Ecclestone says the problem with the struggling Ferrari team at the moment "is the Italians". The Maranello team has notably struggled in 2020, and now at the last..

In Bahrain, the F1 community witnessed the horrific crash of Romain Grosjean and at the same time what only can be described as some sort of miracle as Grosjean appeared from the..

Nov.13 - Sebastian Vettel has admitted that former F1 supremo and friend Bernie Ecclestone helped him to negotiate his 2021 switch to Aston Martin. "I really put pressure on team..

Oct.29 - Bernie Ecclestone says it is "tragic" that those who laid the foundations of Mercedes' utter dominance of Formula 1 are not getting the credit. As Lewis Hamilton..

Oct.29 - Half of Red Bull's Formula 1 driver lineups for 2020 remain uncertain. Max Verstappen is certainly leading the top team, while the energy drink company announced on..