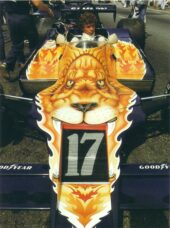 Nov.22 - Dutch F1 GP boss Jan Lammers says he sees "sadness" in Max Verstappen's eyes when he is booed by Formula 1 spectators. The booing is a relatively modern phenomenon in F1..

Nov.15 - The best Formula 1 drivers always have "some sharp edges", according to former F1 driver Christijan Albers. He was commenting after fellow Dutchman Max Verstappen, the..

Oct.20 - Nyck de Vries should be given half a season to get up to speed as a full-time Formula 1 driver. That is the view of Dutch F1 GP boss Jan Lammers, who says it's..

Sep.12 - The world in Formula 1 is up in arms about the manner in which Sunday's Italian GP at Monza ended. Race winner, reigning world champion and runaway championship leader..

He’s a Zandvoort ‘beach boy’, who became a local hero in F1. Racing in the Dutch Grand Prix was a dream come true for Jan Lammers, but he struggled to show his speed in..

Angry farmers do not want to 'hurt' Dutch F1 GP

Aug.26 - Dutch F1 GP organisers have played down suggestions next weekend's Formula 1 race at Zandvoort could be affected by protests. The event is already locked in a running..

Jul.26 - The French GP only reinforced the "big difference" between 2022 title challenger Charles Leclerc and Formula 1's reigning champion Max Verstappen. That is the view of..

Jul.18 - It is not certain that the Dutch F1 GP will become a permanent fixture on the Formula 1 calendar. The race at Zandvoort has become an instant favourite, in large part due..

Jun.15 - Dutch F1 GP boss and former F1 driver Jan Lammers is astonished at the language used by Toto Wolff to describe the 2022 Mercedes car. Whilst radioing Lewis Hamilton after..

May 31 - Two former Formula 1 drivers have warned Charles Leclerc to be careful about his criticism of Ferrari's bungled race strategy at Monaco. Team boss Mattia Binotto..