The Best F1 Drivers of All Time: Our Expert Ranking 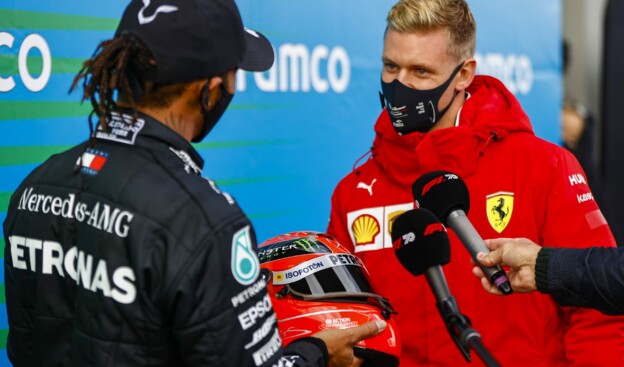 Since launching in 1950, there have been hundreds upon hundreds of Formula 1 racing drivers. Many of them have toured the planet racing for glory in front of millions every week. Understandably, the number one dream is to win the race. Only a select few achieve this feat, while fewer drivers will climb to the exclusive World Champion club.

Of course, there is a tiny percentage who become legends in the field. Whether it’s their talent in the car, character off-track, or epic rivalries, only the greatest cement their place in the history records. Here we will take a look at what we consider to be the best and most legendary F1 drivers of all time.

There were some F1 records that fans thought could never be broken. However, that all changed when Lewis Hamilton burst onto the scene. Before his F1 success, Lewis Hamilton indulged in racing remote-controlled cars. In fact, he beat adults to championships as a child! This success inevitably led to great things behind the steering wheel. 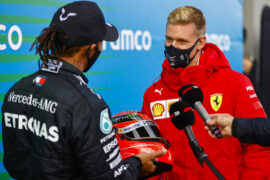 Lewis Hamilton receives Michael Schumacher's helmet after breaking his record of F1 GP wins. The helmet is given to him by Mick Schumacher after he won the 2020 Eifel Grand Prix

To date, Hamilton has started 288 Grand Prix races in F1 and has won an astonishing 103 races, finishing up an impressive 182 times on the podium. Hamilton started his first F1 race in the 2007 season. By 2020, he matched Michael Schumacher’s record by being crowned the F1 World Champion for the 7th time. In 2021, Hamilton was incredibly close to winning his 8th title. However, Max Verstappen was the driver who secured victory on the last lap of the final race of the F1 season. If you enjoy F1 betting, why not play on some gambling sites while we wait for Hamilton to return to the saddle? OnlineCasinos have provided a list here to choose from.

Throughout the 1990s and 2000s, there was one F1 driver who you couldn’t possibly escape – Michael Schumacher. The star secured a string of records during his time on the track. In fact, Schumacher notched up an incredible 7 World Championship titles for Benetton and Ferrari, making it easy to see why he holds a legendary position in the Formula One history books.

Michael Schumacher raced over 300 times in his F1 seasons, winning 91 races overall. Schumacher has also been a UNESCO ambassador and personally donated tens of millions of pounds to charity. Sadly, the F1 legend suffered a severe brain injury in a skiing accident in December 2013. As of 2022, Schumacher continues to receive private medical treatment and rehabilitation for his ongoing injuries.

Ayrton Senna is definitely one of the greatest names F1 has ever produced. Senna won the World Championships 3 times in 1988, 1990, and 1991. During his time at F1, Senna competed 161 times and claimed 41 victories.

The Brazilian racing driver is only one of three F1 drivers from the country to win the World Championship. In fact, Senna held the record for winning the most pole positions (65) before it was beaten in 2006. Sadly, his career ended far too soon with his unfortunate death in 1994 at the age of 34 caused by an accident at the San Marino Grand Prix.

Sir Jackie Stewart was active in F1 between 1965 and 1973. Over these 8 years, the legendary driver took part in 100 races to be exact and won 27 of them. While his time as an active driver came to a natural close, Stewart remained loyal to F1. In 1997, he even entered his own racing team! This was later sold on to Jaguar. 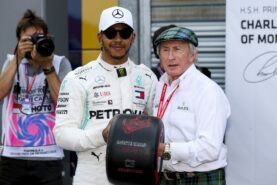 A born racer, Stewart spent many of his teenage years watching his dad race motorbikes while his older sibling Jimmy competed in the British Grand Prix in 1953. 12 years later, Jackie would go on to make his F1 debut, with his performances being described as outstanding and mesmerising. As a rookie, Stewart achieved 5 podiums which include a maiden win in Italy. When Stewart retired from the sport, he made it his mission to make racing safer. This involved pressing for full-face helmets and mandatory seat belts. Aside from all his achievements, motorsport is certainly a better place thanks to Stewart’s efforts.

If we dive further into the history books and go back to the very start of F1, there was one driver who was a cut above the rest in the 1950s. That star is Alberto Ascari. Residing from Italy, Ascari won the World Championships twice and was active for the likes of Lancia, Maserati, and Ferrari. In fact, Ascari won 13 of his 33 races.

Alberto Ascari was a multitalented racer who competed in motorcycle racing before turning his focus to cars and eventually climbing the ranks to the F1 world. Formula 1 fans will remember Ascari as one of the sport's most dominant and best-loved champions.

Not all the globe’s greatest sporting stars are as extrovert as they may appear – or as we may want them to be. Jim Clark was certainly one of the most unassuming gentlemen to ever sit in an F1 cockpit. But, also arguably the most singularly gifted star of all time. Clark won 2 World Championships in 1963 and 1965, respectively. However, he was equally as dazzling in touring cars, sports cars, and managed to secure the 1965 Indianapolis 500!

Scottish-born Clark was active in F1 between 1960 and 1968. During his years at the top, Clark competed 73 times and won 25 races. Sadly, he died in an accident at the F1 Grand Prix of Hockenheim at the age of just 32. While his life was cut short at a very young age, Clark will always be remembered as one of the greatest F1 drivers of all time.

If you’re an F1 fanatic, we don’t doubt that many of the names above will be commonplace in your mind. It’s safe to say that all the F1 drivers listed have achieved astonishing victories, taken the world by storm, and thoroughly deserve a spot on our legend list.

2 F1 Fan comments on “The Best F1 Drivers of All Time: Our Expert Ranking” 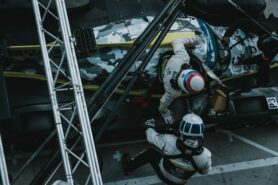 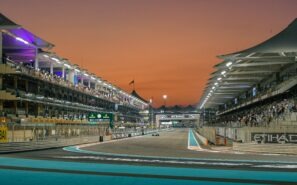